Majesco's F-14 Tomcat puts you in the cockpit of one the Navy's most renowned fighter jets, the Grumman F-14. Your mission is to enforce a "no fly zone" between Taiwan and its aggressive neighbor to the north, China. Just as in real life, you'll take part in a number of missions requiring expert use of the Navy's favorite supersonic, swept-wing jet--16 in all--broken down into the categories of air superiority, fleet defense, and precision strikes against ground and sea targets. It's not a simulator by any means, but if you've recently found the desire to blast terrorist sympathizers, F-14 Tomcat provides a welcome catharsis.

The game begins with a simple mission devoted to acclimating you to the airplane's controls. You can climb, dive, and bank with the D-pad, control throttle with the B button, and fire a variety of weapons with the A button. A combination of the B button and the L or R button allows you to cycle through weapon choices, such as 20mm Vulcan cannons, AIM 7 Sparrow missiles, AIM 9 Sidewinder missiles, AIM 54 Phoenix missiles, MK-20 cluster bombs, and AGM-84 Harpoon antiship missiles. The select button lets you access the aircraft's AWG-9 radar system, which is capable of tracking 24 total bogeys at any given time and also functions as a handy in-game terrain map. The novice difficulty includes automatic landing and refueling features, as well as an extensive supply of armor, while the ace difficulty places you in total control over your own destiny.

Once you're capable of flight, each of the game's 16 missions comes down to one overriding goal: Destroy them before they destroy you. Enemy aircraft, submarines, and warships constantly intrude upon your patrol area, requiring you to engage them in combat before they reach allied territory. Dogfighting is quite fun, mainly due to the fact that you're constantly performing 180-degree turns and barrel rolls in order to keep a bead on jinking MiGs, as well as keeping the chaff at the ready in case a sub launches a SAM in your general direction. Some missions require you to drop special munitions on enemy battleships and tankers, an endeavor that ups the excitement level by throwing you into the direct line of heavy antiaircraft fire--all of which you'll see in a series of huge, glorious, and head-on animated segments. The game's review score takes a major hit for a dearth of land targets and repetitious objectives, but it's a markedly ambitious effort compared with the usual array of handheld flight shooters.

F-14 Tomcat also has some tasty visuals in its favor. The game uses multiple layers of scaling and rotating 2D sprites in order to create a fully three-dimensional theater. If you could apply the term 60fps to a handheld system, it would apply here. The many MiG aircraft and enemy submarines overlay daylight, morning, and nighttime backgrounds, each growing larger and larger as you rapidly approach. Cool effects, such as animated computer screens and flickering antiaircraft fire, also add to the excitement. In general, the dark nature of the terrain and the oversized cockpit make the action difficult to see without strong ambient light, but if you have a few halogens around, F-14 is gorgeous and speedy.

Admittedly, the soundtrack isn't on par with that of Top Gun, but the synthetic rock music and sampled machine gun fire provides an auditory backdrop that is ample enough. The sounds of MiG thrusters, Sidewinders priming for thrust, and low-level ship-based missiles launches are also fairly impressive.

In the end, F-14 Tomcat's somewhat generic nature, dark visuals, and repetitious missions may deter the casual flight jockey. The physics are somewhat bouncy as well, which may displease bona fide sticklers. However, fighter nuts should be most pleased, and those on the lookout for a four-player dogfighting sim should give special attention, as F-14 Tomcat has a nifty four-player combat mode featuring all the game's aircraft. 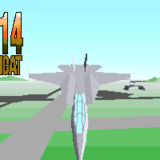