EyeToy: Kinetic offers a surprisingly good personal training program but does make hearty demands of your lighting and space requirements.

Console peripherals tend to fail because not enough games use them, so their cost, for many players, isn't justified. Such has not been the case with the EyeToy camera for the PlayStation 2, which has seen a steady stream of games (and genres) since its release in 2003. In one of its latest endeavors, EyeToy: Kinetic, you use the camera to do a series of aerobic and anaerobic exercises either individually or as part of a 12-week workout program. Developed in conjunction with the fitness gurus over at Nike Motionworks, EyeToy: Kinetic offers a solid exercise experience that, if adhered to, will increase your overall level of fitness. The downside is that you will need to meet more demanding space and lighting requirements than with other EyeToy games, and the minigames used to facilitate the exercises never really stop feeling like work. If you want a good workout disguised as a game, then you're much better off with something like Dance Dance Revolution, which manages to create an aerobic atmosphere ancillary to the actual gameplay. But if you'd like to start a more legitimate exercise routine, one that works on fitness and toning as well as cardio, and you want to avoid the crowds and hassle at the gym, then EyeToy: Kinetic is a pretty good alternative.

The key to EyeToy: Kinetic is the USB camera, which gives the game an edge over other at-home fitness programs by projecting your image onto the screen. From there, you can react to and interact with a number of different objects by punching, kicking, ducking, and weaving. Your success or failure at these activities is measured, tallied, and used to reflect your overall progress with the program. Some sequences, like the warm-up and stretch routines, merely place you on the screen adjacent to your personal trainer, so you can mimic his or her actions, although whether you choose to do these exercises or not isn't measured in any way.

One of the keys to the EyeToy camera use is the "full vision lens," an attachment that comes with the game and that can be placed over the camera lens to increase the field of vision. Unlike most EyeToy games, which deal almost exclusively with the upper third of the player's body, Kinetic, unsurprisingly, makes use of the whole thing. But in expanding the EyeToy's reach, the full vision lens also acts as a filter and contributes, in part, to one of this game's biggest weaknesses. All EyeToy games make some demands of your at-home setup, requiring a fair amount of indirect lighting and space to move around in. Kinetic's demands are much stricter, requiring not only the necessary room to move for your exercises, but that it be a specific distance away from your screen (about six feet). On top of that, it's more difficult to get the game to register your movement unless you are superbly well lit. It's in this way that using the EyeToy works against the game, since poor lighting and unspecific space requirements will make the game unplayable, unless you're in the mood for a redesign.

Assuming that you've got the proper setup for the game, you can choose one of two modes to design your workout. Routine builder lets you choose and perform any exercise available in Kinetic. You can select any number of exercises or any type, opt to add warm-up and stretching portions before and after your routine, choose one of a few different backgrounds to work out in, choose from a selection of background music, and also pick one of two personal trainers who will offer advice and encouragement along the way. While this is a good way to get to see the different exercises in the game, and is certainly not very demanding of your time, the routine builder is not nearly as motivating as the personal trainer mode, which follows the internal clock in your PS2 and provides a more strict workout regimen.

After you answer a few questions about your current level of fitness, age, and weight, the game will assign you one of three difficulty levels for personal training. From there, it will generate a 12-week program consisting of a well-balanced workout routine three times a week. The game gives you some flexibility for your workout days, allowing you to choose between a couple of days for each. If you miss your workout on Tuesday, though, be sure to catch it on Wednesday, or you'll risk getting reprimanded by your personal trainer for your absence. Of course, you can always adjust the internal clock on the PS2, but that would be cheating.

There are 22 games in EyeToy: Kinetic, which fall into four zones: cardio, combat, toning, and mind and body. The cardio zone activities are aerobic exercises that, when done properly, get your heart rate pumping. Ricochet, one of four games in the cardio zone, places blue orbs on opposite sides of the screen, which you must get to and touch while avoiding red orbs bouncing up and down around you. You'll be able to do this by ducking and side-stepping, as well as by contorting your body around the bouncing balls. For games in the cardio zone, a trainer silhouette can appear on the screen to show you the best way to do the exercise. Games in the combat zone are based on moves and stances from martial art disciplines such as karate and tae kwon do. In Protector, you must guard a moving red ball from an onslaught of yellow balls coming from the different corners of the screen. The most effective way to do this is to use your four limbs to punch at the balls without moving your midsection, lest you disrupt the red ball. Toning lets you do exercises that focus on specific muscle groups, and mind and body involves a range of activities, including tai chi and yoga routines. Each series includes a warm-up at the beginning and a stretch at the end, giving you a well-rounded and safe workout experience. At the end of the routines, you'll be able to check your heart rate to see if you're working hard enough, and at the end of each week, your performance will be measured on easy-to-read visual graphs.

The variety of workouts, the way they're assembled, and the guidance of the personal trainers create as good of a workout experience as you can expect outside the gym. The personal trainers offer encouragement during the game, as well as helpful tips such as "If you think your shoulders are tensing up, stick your tongue on the roof of your mouth, which will release your jaw, and your shoulders will relax." Aside from these tips, they'll also offer warnings about common errors made during certain exercises--such as arching your lower back during some Pilates floor routines--and provide more intensive ways to do the exercise if you aren't getting enough of a stretch. You'll have the option to select between a few different songs to accompany the trainer's helpful words, and in most cases, the music does a good job of contributing to the game, although being able to select your own tunes or from a more diverse catalog would have been nice.

Despite the potential flaws of the setup, EyeToy: Kinetic is a nice and logical next step for the camera peripheral. Having a virtual personal trainer at home will never be as useful as having a live one to accurately gauge and correct your movements, but Kinetic is the next best thing, and at a fraction of the cost. The games are entertaining, but not really enough of a diversion to make you forget that you're exercising. If you're motivated enough, then that won't really matter, but there are certainly other, more fun alternatives to a home workout--fun being the operative word. EyeToy: Kinetic is an exercise program first and a game second, and it does a very good job at that. If you are looking for a way to shed a few pounds or just increase your personal fitness, then Kinetic is a solid and well-put-together workout experience. 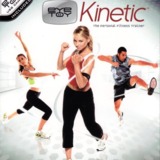 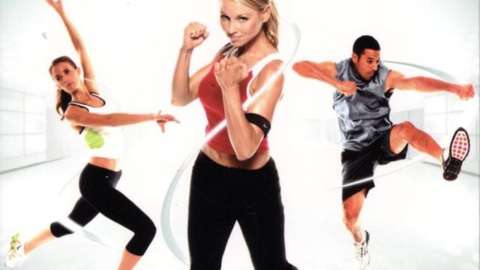 EyeToy: Kinetic lets you get in shape with a challenging workout all in the comfort of your own home.