EyeToy: AntiGrav pushes the limits of what you should expect from an EyeToy entry, but its occasional inconsistency hobbles an otherwise bold and enjoyable experience.

With unconventional offerings like Frequency, its sequel, Amplitude, and the Karaoke Revolution series under its belt, it's obvious that developer Harmonix likes pushing boundaries. Up until now, games using Sony's EyeToy USB camera have stuck with a construct of collecting short-and-sweet minigames into a single package. Harmonix, staying true to form, pushes the limits of what you should expect from an EyeToy entry with EyeToy: AntiGrav, creating a single cohesive gameplay design. Unfortunately, the EyeToy pushes back, and its occasional inconsistency hobbles an otherwise bold and enjoyable experience.

Unlike past EyeToy games, AntiGrav does not show an image of you on the screen, except for during calibration screens. This lets it execute a more seamless, immersive concept. EyeToy: AntiGrav is sort of like SSX in the future. You ride a hoverboard through a variety of urban environments, either aiming to accrue points by pulling off tricks and collecting special pickups or aiming to go through heats of races against computer-controlled competitors. None of this is really particularly innovative. In fact, the hoverboard, future-sport thing is almost as boilerplate as you can get. However, it's how you actually control your hoverboard rider that makes things interesting. The key to AntiGrav's controls is your face, which the camera locks onto. AntiGrav then uses your face's relative position to determine both your speed and the direction you're headed. Bend your knees a bit and you'll hit a good cruising speed. Duck down some more and you'll tap your turbo boost, which gives you some decent acceleration for a good five seconds. Move your head to the left or right a bit and your rider will turn accordingly. Once you understand this much, the basic controls are pretty intuitive, though there's more to the game than just bobbing your head about.

You'll also have to swing your arms all over the place, though this serves a few different purposes. The game is filled with rails that you'll automatically lock onto when you get close enough, and you can't get off until they end. While you're on these rails, you'll hit obstacles that require you to jump and duck, which you perform by literally jumping and ducking. There are also icons that you'll have to reach out with your hand to grab, again, literally. The game also features an aerial trick system that largely relies on arm movements. The tutorial shows you the basics, so sweeping one up will cause your character to barrel roll, while sweeping both up will trigger a backflip. AntiGrav leaves the rest for you to discover and explore on your own. What we discovered, though, is that you should make sure there's plenty of room where you're playing, because jumping up and down and swinging your arms in all directions like a complete maniac seems to work pretty well in executing quick chains of high-scoring moves. The game does reward you for performing specific combos at specific points, though the trick system is so simplistic that such precision is generally unnecessary.

Mixing things up further are launch pads that will toss your character way up into the air, at which point a set of mechanical wings will automatically emerge from his or her back. From here, your aim is to glide through a series of rings that can net you some points and an extra speed boost. The different activities, compounded by the speed and the score focuses of the game's two main modes, compounded yet again by the fact that each of the courses is rich with secret areas and alternate paths, give EyeToy: AntiGrav a potentially long life inside your PlayStation 2. On paper, this is all fantastic, and much of AntiGrav is rather well executed. However, technical limitations inhibit the game from reaching its true potential.

Most EyeToy games are pretty demanding with the specific level of light needed to function properly, but AntiGrav is probably the choosiest EyeToy offering we've yet seen in this respect, likely because it demands so much from the camera itself. As you play, there is a small diagram in the corner of the screen that shows you where the game thinks your hands and head are, which is most helpful in giving you context for where and how far you need to move for the desired results. It's also good for letting you know when the EyeToy is misreading your movements, which takes place more often than it ought to. One of the issues is that when the game takes its initial facial scan, it's "seeing" your face at a specific angle. So if you tilt your head too far in any direction, the EyeToy has trouble recognizing your face and may end up relocking on your neck or your shirt in the middle of play. The game itself seems fairly aware of how temperamental the EyeToy can be, so it will recheck the accuracy of it before each event, and it will give you the option to recalibrate the EyeToy, which is certainly considerate, although it doesn't remedy the fundamental issue. When AntiGrav is working right, it's a totally immersive experience that is seamlessly and intuitively able to translate your movement into onscreen action, which is truly an incredible feat. But when you're trying to trick the camera into recognizing your face again, it's no kind of fun at all.

The influence of EA Sports Big's stylish, visceral snowboarding series is almost palpable, not just in the overarching objectives or in the impossible (or at least improbable) trick system, but also in its visual language. Each character falls into a familiar archetype. There's the out-of-control hot dogger, the solemn samurai, the prodigal youngster, the butch girl, the fake-stripper girl, and so on. Furthermore, there's a futuristic, black-lit, neon-glow, raver-sort-of vibe thrown in there for good measure. The level designs support this futuristic look rather well and will have you flying through the air over strange, futuristic industrial complexes, down freeways populated by hovercars, and, in one of the game's more inspired moments, down the side of a massive skyscraper. The look is kind of chunky, and it's not fantastically detailed, but it runs smoothly, and the draw distance is unnoticeable. More importantly, it's able to provide a pretty good variety of environments without breaking the overall look.

Those already familiar with any of Harmonix's past work, especially Frequency or Amplitude, should be unsurprised to learn that AntiGrav features a dynamic yet thematically consistent soundtrack with a heavy dance influence. According to Sony, every piece of music featured in the game, right down to the menu music, was produced by techno outfit Apollo 440. It's all original material, and it aims for atmosphere rather than driving hooks or infectious basslines, thus creating a nice blend of drum 'n' bass, straight-ahead house music and some good guitar-driven "action movie techno." The dynamic aspects aren't that subtle or profound, so rather than having the instrumentation based on performance, the tone will shift as you move to different parts of a course. The riders themselves will speak up when pulling off big tricks or when bailing off their boards, which ostensibly reinforces the different characters' attitudes, though they end up kind of running together, creating a generally sarcastic, slightly arrogant tone.

The risk of pushing the envelope is that you can slip and end up with a real nasty paper cut. EyeToy: AntiGrav is definitely outside Harmonix's comfort zone of mostly music-driven gaming, though it's an honest effort at something interesting and accessible. However, the daring design outstrips the technology that drives it. The game remains an interesting experiment, and intrigued EyeToy owners should definitely give it a rental, if, for nothing else, just to understand how novel it is, even among games that ride almost entirely on novelty. In the end, though, the technical shortcomings of the EyeToy seem to explain exactly why most EyeToy games are short and sweet affairs. 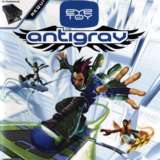 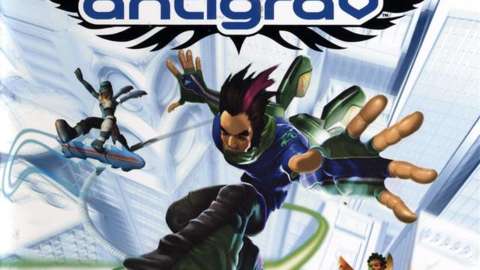 EyeToy: AntiGrav pushes the limits of what you should expect from an EyeToy entry, but its occasional inconsistency hobbles an otherwise bold and enjoyable experience.