Excitebike has nostalgia going for it, but it's also a lot of fun to play.

Many people have fond memories of Excitebike, since it was one of the original launch games for Nintendo's NES console back in 1985. Now that the game is available for the Wii's Virtual Console, it's nice to see that it's still charming and fun to play, even if the intervening years haven't been kind to the graphics and audio.

In a nutshell, Excitebike is a side-scrolling rendition of supercross motorcycle racing. The two buttons propel your bike forward. One gets you going faster than the other, but will also generate heat that can eventually lead to a temporary engine stall. As the screen scrolls by, you need to move up and down between the four lanes and pop wheelies in order to avoid obstacles and CPU-controlled riders. Speeding over hills will send you flying into the air. While in flight, you can use the directional pad to tilt your bike forward or backward to get more hang time and land on ramps at an angle that won't slow you down. If you finish the course with one of the top three times, you'll move to the next. The overall goal is to make it to the fifth and final course and come away with the top time. Tracks go by fast and take about a minute or two to finish. It shouldn't take you more than 30 minutes to master all five tracks, but the design is so simple and fun that you'll probably feel the urge to play again and again as the days pass.

Since Excitebike was one of the first games made for the NES, the graphics and audio are plain even by 8-bit standards. There's very little music in the game. As you move down the track, you'll just hear the constant buzz of the engine and the periodic harangue of the overheat warning. The same static backdrop is recycled for each track, though the color scheme and the placement of objects do change. The tiny riders and bikes are charming, but they don't animate much. You'll see the wheels bouncing up and down, and, if you wipe out, you can watch your rider tumble end over end and then hobble back to his bike. Despite the lack of flash, the graphics are clean and have a certain charm about them. Watching your rider fly off a ramp like an 8-bit Evel Knievel is more thrilling than you'd think.

The game doesn't offer a two-player mode, unfortunately, but you can choose whether or not to race against CPU riders. You may also get some extra mileage out of the game's track editor, which lets you place obstacles on a track, set the number of laps, and save your creation for later. When Excitebike was originally published for the NES, the save function couldn't be used because Nintendo never got around to releasing the tape-drive peripheral that the function required. The save function works in the Virtual Console release, just as long as you remember to load your track each time you restart the game. Nothing else has been updated or changed. The game looks and sounds just like it did on the NES, and, using the Wii Remote, it plays the same too.

Excitebike won't consume hours of your time, but, at 500 Wii points ($5), it's a decent value when you add up all of the short bursts of fun you can have with it. 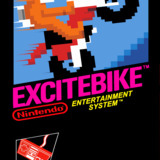