Evil Zone is a refreshing surprise from a development team not known for fighting games.

Originally released in Japan a few months ago as the tongue-twistingly titled Eretzvaju, Titus has picked up the projectile-based fighter and released it in the States as the hilariously named Evil Zone. An amalgamation of Psychic Force and Destrega, Evil Zone is a projectile-based 3D fighter that adds a dynamic element lacking from most of today's fighting games. Developed by Yuke's, the team behind the successful (in Japan at least) Toukon Retsuden series, and the not so successful Soukaigi (Square's recent action RPG), Evil Zone is a refreshing surprise from a development team not known for fighting games.

The premise in Evil Zone centers around the main character, Danvaizer, a superhero in the mold of classic Japanese afternoon TV shows (a la Power Rangers, Kamen Rider, etc.). While the storyline is truly superfluous, it nevertheless suffices as reason enough to gather Danvaizer and nine other combatants together to do battle in a distinctly different manner than most other fighting games.

Like Psychic Force, the majority of the action takes place via long-range attacks. Streamlining things considerably is the fact that there are only two action buttons at work: attack and block. While this may seem unfeasibly simple, the control scheme fits the game just fine. The attack button, when pressed once, twice, or three times, at a distance, will fire a basic projectile attack. When pressed within striking distance, your character will automatically use his close-quarters attack. The subtleties of the battle engine only reveal themselves at a distance, however, as the best and most powerful attacks are almost all long-range. By pressing the attack button in conjunction with the D-pad (up, down, left, or right), each character will perform different moves. Depending on how long you hold the attack button down, this will also affect the nature of the attack. For example, by pressing up and attack at the same time, one character might unleash an energy discuss. If you press up and the attack button rapidly two or three times, that same attack would now come out in two or three smaller, faster bursts. Also, each character has a stun attack (either forward and attack, or backwards and attack) that you can dizzy your opponent with, setting him up for a smash attack (forward, forward, attack), a projectile attack, or, better yet, a captured attack (down and attack). Captured attacks are particularly cool because each character has at least three different moves, depending on his proximity to the enemy (midrange, long distance, or behind). Should you snare your opponent with a captured attack, you'll be treated to some of the most visually spectacular moves yet seen in a fighting game. Take Danvaizer, for instance. One of his captured attacks holds his quarry suspended in midair as he summons the help of an orbiting satellite. The satellite then receives its digital commands and sends down a beam of light, through the clouds, like something out of Final Fantasy VII. The beam then strikes the hapless recipient in a screen-clearing explosion that does considerable damage. On top of the supercharged melee is the presence of the crystal attack. By holding down the attack button you'll fill up your life bar with a yellow streak. When your bar fills up you'll receive a crystal above your meter. You can store up to three crystals, which, when activated by your character's particular crystal attack, will essentially launch a supercapture move that involves highly damaging, highly humiliating attacks, that also differ depending on proximity. Above all, Evil Zone features some of the most innovative moves you've seen in a fighter.

Balancing the all-out offensive blitz is the block button. The block button will essentially neutralize almost any attack and must be used prominently, or else you'll find yourself facing the dirt in no time. Certain attacks, depending on their power, will chip away at your life bar like any decent attack would. In fact, the block button comes in especially handy when someone launches an up-close-and-personal crystal attack. The camera will switch to a dynamic close-up view of you swatting away your opponent's ferocious attack with blinding ease. It's awesome to watch this game in action. The other thing that aids you in attack avoidance is the ability to side step. By pressing up or down, you'll walk into or out of the foreground. Jump attacks only occur when the D-pad is used in conjunction with the attack button, so the 3D movement may take some adjusting to. In any case, it works very well and is actually useful for avoiding unwanted damage.

Feature-wise, Evil Zone is your typical game with typical features (training mode, survival, versus, story, options). The most interesting mode would have to be the story mode. In story mode, each character has his own between-game attract screens that give the game a lot more personality than your usual "now loading" screen. After you've met certain requirements, additional bonuses unlock, such as an illustration gallery, music player, narrator selects, and an encyclopedia. Each character's own particular tale is told through still shots, engine-based cutscenes, and some uniformly hilarious voice acting. Instead of using subtitles with the original Japanese language, Titus opted to go all out and re-record everyone's dialogue. Too bad the dubbing is about as good as those old kung-fu movies of the '70s and '80s. Mouths continue to move after the character is done talking and the actors sound like rejects from a high school play. Interestingly enough, the instruction booklet is also victim to an incredibly poor translation.

Graphically, the game is a mixed bag that leans in favor of its pros as opposed to its cons. The characters themselves look great, with sumptuous light sourcing lathered over each unique fighter. The characters are also nicely detailed and look great even up close. Each of the fighter's special attacks is unique to the user; they look great and are amazingly inventive. Whenever you pull off a special attack, particularly a capture attack, the camera switches to multiple dynamic angles that give you a truly cinematic view - simply the best seat in the house at all times, and you never see the same attack from the same angle. Should you use only one supermove throughout the whole game, the autocamera will find a new way for you to view it each time. The downside is when you look at the backgrounds, which offer nothing in the way of geographical variances (like Destrega and its multitiered arenas). Instead, the settings are completely flat, with simple 2D bitmaps as backgrounds. Also, the backgrounds have a tendency to warp and look pretty weak as a result. Nevertheless, you'll soon forget about it once the fireworks start zipping around.

The soundtrack is nicely done, with each character having his own personal score, giving everyone a distinct feel. Sound effects are also well done and suit every effect in the game so you get a good sense of the action. Like Psychic Force, the introduction is hand-animated and is a nice touch to this extremely fun game. While the endings are really short and based around one generic theme, the game offers a lot of replay value, especially if you have a friend to play against.

While this game could have been an all-out offensive smorgasbord like the first Bloody Roar, it manages to balance itself well, despite only having two buttons to work with. That simple scheme works out well here. Despite the odd exclusion of now-common features like analog support and Dual Shock vibration, the control is top-notch with response times being right on the money. The characters look cool, if a touch derivative, but once you see the flowing hair and awesome special attacks, critics will soon find themselves at a loss for words. While it's not the greatest game of all time, Evil Zone is extremely fun and it shows that Yuke's has learned something from its past experiences. Although it's hard to make an impression in the fighting genre nowadays, Evil Zone (despite the horrible name and iffy voice acting) is a game that's definitely worth picking up. 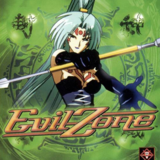