Had the battle sequences not been so maddeningly frustrating and frequent, Evil Dead: Hail to the King would at least weigh in as a decent Resident Evil clone, but they work to make the game almost unplayable.

Media known for cartoon violence such as horror movies, comic books, and video games are crossbred so frequently that it's quite a surprise it's taken more than ten years for a game based on Sam Raimi's Evil Dead film series to appear in the game world. Instead of turning the events from one or all of the movies into a game, THQ's Evil Dead: Hail to the King picks up where the third film, Army of Darkness, left off. You return to the lone cabin in the woods where the evil spirits broke through into our world, only to be forced back after a series of gory, albeit Three Stooges-like, battles with the film's protagonist Ash (played by Bruce Campbell in the films and voiced by him in the game). The "Deadites" have now not only found a way to come back, but they've also kidnapped your girlfriend, made an evil duplicate of you, and possessed the local townsfolk. The only way to stop them is to collect the scattered pages of the book that summoned them and then "send the evil back."

Evil Dead: Hail to the King attempts to marry the concepts of the film series with the style of play found in Capcom's Resident Evil games - you view Evil Dead from a variety of fixed camera perspectives, kill monsters with your shotgun and chainsaw, and store away items that you don't have enough room to carry in a mysterious box that magically reappears in several different places throughout the course of the game. The gameplay in Evil Dead differs from Resident Evil in that it favors action over puzzle solving. To its credit, the game provides ample amounts of ammo and health. It's unlikely that you'll have to replay a section of the game more than once to make sure that you have enough bullets and first-aid kits to get through a tough spot, which happens frequently in the Resident Evil series.

Wealth of ammo and health aside, there are so many monsters in Evil Dead that it often feels like you're swimming through them. Deadites well up from the ground in front of you, disappear, and then reappear until you destroy them. Some areas will spawn so many creatures that you'll eventually decide to run away because you've grown bored or annoyed with the whole sequence. Battling multiple foes simultaneously leads to a new set of frustrations. Groups of enemies surround and attack you while you're busy fighting one of them. This would be fine if you possessed a group attack, but you don't, and to make matters worse, a chainsaw can get caught up in the belly of a single creature, leaving you vulnerable to attack from the others. If you try to avoid the monsters, you'll notice even greater problems with Evil Dead. Imagine running down a path and having a Deadite appear in front of you. You move to one side to avoid it, and it knocks you off your feet. You get up and try to keep running past it, only to get stuck on a spot of bad collision detection in the environment. Then another monster appears in front of you. From there, you're stuck having to take on both of them, and it's likely that at least one more creature will appear before you manage to move on to the next screen. Instances like this, as well as the times when you intend to stand and fight for that matter, feel similar to running a marathon through a shopping mall.

Evil Dead's fixed camera angles often defer to cinematic perspectives instead of those that are actually useful in a fight. This means that you'll often find yourself on a path or in a room battling a Deadite and you won't be sure if your attack is lined up correctly (your foes, however, don't seem to have any trouble doing the same). This is a classic example of a graphical problem affecting gameplay, although the visuals do possess a few nice touches outside of that. The game's rendered backgrounds work well to re-create the mood of the Evil Dead films, and they're given some semblance of life through the use of short video loops. These create the illusion of movement such as tree shadows swaying in the wind (although this element is presented more successfully in the Dreamcast version of the game and in Eidos' Fear Effect, for example). Subtler visuals such as the chunks of gore that drip off of Ash's chainsaw after a battle with a Deadite are also worth noting.

Had the battle sequences not been so maddeningly frustrating and frequent, Evil Dead: Hail to the King would at least weigh in as a decent Resident Evil clone, but they work to make the game almost unplayable. The fights even undermine the otherwise decent puzzle-solving elements, since you're required to do a lot of backtracking across areas where Deadites constantly respawn.

If THQ continues to create games based on this license, there's at least hope that the next will turn out better, but this first effort is far from encouraging. It's hard to believe that the survival-horror genre can only be done right by Capcom (and perhaps Konami), but Hail to the King will do little to convince you otherwise. 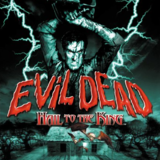