Everyday Shooter is an intensely creative and challenging take on the dual-stick shooter genre.

Everyday Shooter is anything but an everyday shooter. Such a title belies this game's level of creativity, though maybe that was the point. Developed by a single programmer named Jonathan Mak, this is a wonderfully unique and engaging spin on the Robotron-style dual-stick shooter that countless games have copied to death over the years. It offers up eight stages that provide entirely separate challenges from one another and a solid level of difficulty. It also has a dreamy vibe created by its fantastic art style and bedroom rock soundtrack. It's the sort of offbeat little game that will probably either bore or irritate some people to no end, but for those who can appreciate its eccentricities, it's a real treat.

The second you jump into the game, Everyday Shooter assaults you with its quirkiness. The menu system is just blue text on a bluer background. Once you hop into the first stage, you're presented with an ethereal-sounding guitar track while something that looks like a Windows Media Player visualizer fades in and out. From there, the first stage loads up and you're essentially left to your own devices as you deal with oddly colored shapes coming at you in strings while you control a nondescript-looking white dot that will fire shots at said shapes when you press the right analog stick in a specific direction.

Apart from the strange art style, that probably sounds just like any other Robotron clone out there. However, what makes Everyday Shooter so intriguing is the way you build scores. Just shooting stuff doesn't net you points. Instead, you have to collect tiny pixels that spill out of specific enemies. Getting those pixels to appear is initially tough, at least until you figure out the chaining system for a specific stage. On the first stage, you have to shoot a specific object type to create a sort of black hole that increases in size the more you fire at it. Any enemy that touches it explodes into a mass of collectable pixels.

The trick is no two stages are alike. One moment, you might be blasting away at a large blob to simultaneously kill all the smaller blobs connected to it while deftly avoiding huge waves of enemy fire. But the next moment, you'll be shooting a giant eye and some very specific spherical enemies while a whole mess of spherical enemies come pouring out of it. With each progression to the next stage, the chaining systems become more obscure and the challenge ramps up considerably.

In fact, by the time you hit the third stage, you'll probably be begging for some kind of "kill everything" superweapon like most shooters of this ilk tend to include. No such luck. You either figure out how to do the chain kills or you're boned. It doesn't help that your nondescript dot doesn't move especially fast. You move faster when you aren't shooting, but even then, you feel a tad sluggish. It's also hard to pick up a lot of those dropped pixels because you don't just absorb them the second you touch them. They drag behind you as you move, so you kind of have to stop for a second to absorb them. It's the sort of thing that is initially very frustrating, but you eventually get used to once you figure out the strategy for each stage. Still, some kind of last ditch effort superweapon would have been a big help.

Interestingly enough, Everyday Shooter actually gets easier the more you play it. The pixels you pick up aren't just points for your score, but they are also currency for the game's unlock mode. In here, you can continually buy more starting lives and unlock individual stages for the game's single stage play mode, as well as some visual filters. It's an ingenious system because it gives you quite a bit of motivation to keep playing through the main mode over and over again as no effort put in is really wasted. You don't fail because you didn't beat your previous high score. You succeed in gaining a bunch more points you can use to unlock stuff. It is with this system that Everyday Shooter gains a lot of replay value, especially given the game's limited number of stages and lack of an online leaderboard system. You could easily find yourself sucked into the game for far more time than you'd ever anticipate just because you want to get to that next stage--come hell or high water.

The game's hypnotic atmosphere also goes a long way toward adding to its addictive nature. For one thing, the artwork from stage to stage is never quite the same. It all has the same sort of anime-meets-modern art vibe to it, but the enemy and background designs shift into completely new territory with each stage progression. Half the fun at the outset is just getting to see what kind of crazy crap you'll encounter next.

On top of that, all of the game's audio is tied directly into the stage design. It's not a completely dynamic "you affect the music as you shoot" kind of thing, but all of the game's explosion and damage sound effects are notes on the solo electric guitar that makes up the entire soundtrack. Each stage has a different tune that actually plays into what's happening in the stage, and each time you kill something, new notes are laid on top of the primary track. At times, it can get a bit cacophonous, but the game actually does a great job at making the notes feel like they belong within the context of the song. It creates a uniquely trippy vibe that gives you the impression you're playing out some kind of imaginary psychedelic battle inside Elliott Smith's brain, or something.

Geometry Wars was the first game of this ilk to come around in a long, long while that actually made this sort of age-old dual-stick shooter feel fresh and fun again. And arguably, Everyday Shooter is the first since that game to do it all over again. Again, some people probably won't be able to stand some of the game's more fanciful elements. Whether it's the one-man guitar soundtrack, tough difficulty level, bizarre art style, or the sometimes obfuscated chaining mechanics, this is certainly a very polarizing kind of game. But if you're able to appreciate all these individual elements and how they come together in the end, Everyday Shooter will get its hooks in you. 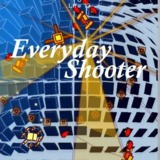 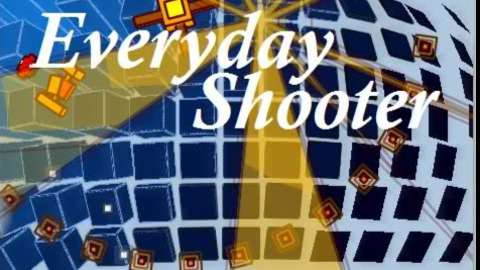