It's a VR golf game for everybody.

The newest game in Sony's long-running golf series, Everybody's Golf VR is the second to launch on PS4 and first to bring the series to virtual reality. The transition isn't without its bumps (there's a noticeable lack of Everybody's Golf's traditional competitive modes), but the PSVR golf game does deliver a fairly realistic golfing experience that's both accessible to play and fairly challenging to master.

Everybody's Golf VR abandons the franchise's usual third-person view for a first-person perspective. The three-click swing mechanic (commonly seen in most of today's golf games) is also gone. Instead, you swing your clubs with a PlayStation Move or DualShock 4 controller, hopefully in one smooth motion. The direction of the ball is determined by the angle you hit it, and distance is calculated by how hard you swing. There are other factors to consider when you're on the course as well, such as wind direction and your elevation in relation to the hole.

Actually swinging your arms to hit the ball takes a bit to get used to, but the motion controls are remarkably responsive with a DualShock 4 controller. Once you've got the form down on your swing, you'll be able to reliably hit the ball the way you want to. The same can't be said for the PlayStation Move controller. Occasionally, the Move controller works fine, but I found myself more often than not being unable to even reach the ball with my club while swinging the Move. I ultimately just had to stop using it, as it became too frustrating to play a near-perfect hole only to be stopped short just because my club would not reach down far enough to hit the ball no matter how much I crouched.

In Everybody's Golf VR, the golf balls behave as they're expected to, obeying the laws of gravity when it comes to the arc of your shot or elevation of a slope, and their roll realistically heeds to changes in friction when the terrain is affected by different weather patterns, like rain. As previously mentioned, the motion controls are pretty precise. The camera measures whether your swing misses the ball, glances off of it, or makes full contact, and then takes the angle and power of your swing into account. Shifting too much of your body weight to one side or curving your swing typically results in a lousy shot, while maintaining good form sends your ball flying straight as an arrow (provided there are no environmental factors to take into account as well). The game isn't an exact representation of reality--you don't have to swing nearly as aggressively as a professional golfer to achieve distances like one--but Everybody's Golf VR sells you on the experience that you're actually playing golf in your living room.

There's a welcome variety of customization options in Everybody's Golf VR, allowing players of all skill levels to enjoy time on the course. If you're having trouble putting, for example, you can turn on vacuum holes--which suck the ball in provided you get your shot close enough. For a more challenging experience, you can tee up on longer versions of the courses where it's harder to hit par. There are some nice accessibility options as well, such as the choice to play while standing up or sitting down, the option to change your dominant hand from right to left, and the freedom to choose between several sets of clubs--including one that makes it easier to hit the ball straight if you have limited mobility in your arms. There's plenty in Everybody's Golf VR to make the experience appealing to all types of players, and helpful tutorials give newcomers a chance to grasp the basics of the sport until they can get the swing of things.

Everybody's Golf VR's courses are populated with everything you'd expect to see in a golf game, like sand traps and trees, as well as a few things you might not, like dinosaurs. Occasionally, a bee flies in your face or the sound of a wave crashes onto a nearby beach. These sights and sounds are never distracting, but via a PSVR headset and headphones, they do make it feel like each golf course is full of life. Decide to look closely enough, however, and you'll notice the golf resort's reception area and each course is always eerily empty save for your character and either the receptionist or your caddie. It's a tad unsettling.

Each distinct environment provides more than just a cosmetic change, as a course's aesthetic translates into different environmental hazards to deal with; the Seaside Course is very windy, for example, and its holes have a lot more sand and water traps for your ball to be blown into. A course's hazards aren't enough to force you to drastically change how you play, but they do provide just enough of a welcome challenge to encourage out-of-the-box thinking. It's fun learning about how a new course works and satisfying to successfully deduce how to adapt to it. In the Seaside Course, for instance, you can risk timing your shot to a powerful gust of wind in hopes it will send your ball flying over an out-of-bounds area--which could save you an entire swing in the long run.

Unfortunately, there aren't many courses for you to play on. And other than Practice Range, the only game mode in Everybody's Golf VR is Course. In Course, you do have the choice of whether you play a random three holes from a course, the first nine, the last nine, or all 18. But with only three courses total, you'll end up replaying the same holes repeatedly in order to unlock all the in-game rewards. It gets tedious after a few hours.

The lack of additional modes in Everybody's Golf VR is a step back in comparison to previous titles in the series, many of which have one or two modes where you can face off against NPCs. As is, the only thing you can do in Everybody's Golf VR is play a course by yourself while your nearby caddie yells words of encouragement. Everybody's Golf VR does lessen some of its tedium with those caddies, though, as the eagerly helpful Riko and teasingly friendly Lucy help make your repeated trips out to the same collection of courses far less lonely.

Replaying courses allows you to unlock additional outfits for your caddie to wear, which is a fun cosmetic reward to chase after. You can also unlock a handful of Events by partnering with a caddie long enough. Some play out like romantically-charged mini dates, but most are just goofy distractions good for a laugh or two. Each caddie has her own unique set of four Events, and though their unlock rates are spread out enough that it will take you a few hours to see them all, once you do there's nothing compelling to work towards in the game.

Despite the lack of different activities in Everybody's Golf VR, the one thing it does do--provide a means of playing golf without actually having to go outside--is relatively enjoyable. Though it runs out of steam quickly, Everybody's Golf VR is fun while it lasts, and there are satisfying goals to chase for a time. Everybody's Golf VR's best feature is its assortment of customization and accessibility options, though, as they allow both golf newbies and veterans to curate their desired experience and just enjoy playing a round. 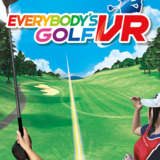 Jordan wishes he was half as good at golf in the real world as he is in Everybody's Golf VR. An introvert through and through, it took him a lot longer to get accustomed to the caddies' very forward enthusiasm than he cares to admit. A review code was provided by the publisher.