It's been an interesting journey for Every Extend Extra Extreme. This trippy, rhythmic antishooter started off as a freeware PC game called Every Extend, which Q Entertainment, proprietors of similarly mesmerizing games such as Meteos and Lumines, expanded upon for the release of Every Extend Extra on the PSP last year. The game has been upgraded once again for Every Extend Extra Extreme on Xbox Live Arcade, and not just with additional alliteration. The neon-soaked visuals have been upgraded so that they really shine on a big HDTV. Online multiplayer has also been added, and the action has been generally made more, well, extreme. It's not a terribly challenging or player-intensive game, but that's not really the point. It's as much an interactive lightshow as it is a game, and the flashing, spacey visuals in combination with the pulsing, electronic soundtrack make it a hypnotic and singular experience.

The core gameplay in E4 basically turns the shooter convention on its ear by turning your destruction into an offensive attack. In this case, your "ship" is a star-shaped cursor that must navigate a field as formations of shapes and more aggressive, projectile-spewing enemies drift onto the field. Physical contact with any of these will destroy your cursor, and your only means of fighting back is to blow yourself up first. You can cause your cursor to explode with the press of a button, which sends out a shockwave that will destroy any nearby shapes. These shapes will then release their own shockwaves, which destroy other nearby shapes, and so on.

Bigger chains net you bigger scores, and without any real distinct gameplay or level progression, the ultimate goal in E4 is to push your score higher. The game really packs the screen with shapes, to the point that it's not uncommon for a chain to go on for a good 15-20 seconds, and for a single-game score to reach the trillions. When your cursor spawns back onto the field after the chain ends, you're given a few seconds' worth of shielding to acquire power-ups left by the destroyed enemies. These can extend the amount of time your shields are active for, extend the time limit, and increase your score multiplier. You can also cancel out an active chain with the press of a button, which can have certain strategic benefits.

As the game ramps up, it quickly becomes nigh impossible to dodge the plentiful enemies onscreen; you reach the point where you're actively playing the game only during the short window when you're shielded, which can make for some weird pacing. There's a light musical element to the action as well, in that you'll notice that enemy explosions happen in time with the blippy, psychedelic background music. The only way this really impacts the gameplay is that you can earn a score bonus by detonating in time with the music.

The dynamics of the gameplay can change a bit depending on which mode you're in. In the game unlimited mode, you're playing against a countdown clock. The only way to keep the game going is to pick up time-extending power-ups, which means you must be thoughtful about when you need to cancel out a chain to collect more time extensions. Though you start out with only a couple of minutes on the clock, a single game can very easily push an hour. Conversely, the game's time-limited mode challenges you to rack up as big a score as possible within five, 10, 15, or 20 minutes. The wiz ur muzik mode is essentially the same as the game unlimited mode, though you can use your own background music, and the game gives you a few options for syncing up the rhythm of the music with the gameplay. The revenge is the most divergent gameplay mode in E4, which is ironic, considering that it turns the game into a more traditional shooter. You can also play E4 against another player over Xbox Live. You and your opponent, each on your own playfield, attempt to out-chain one another in what is essentially a high-score competition. It's interesting, but it's not really as engaging as some of the single-player offerings.

Despite its relative simplicity, there's something pretty compelling about the gameplay. Regardless, what really makes E4 so entrancing is the presentation, which looks and sounds like a space rave that exploded in your Xbox 360. The backgrounds glow and pulse with abstract light patterns as the enemies burst with color in the foreground. The whole thing is awash in particle and lighting effects, and between the two layers, there's often so much happening at once that it overloads the senses. The music is similar in tone to what Q Entertainment has put in its other games, and consists of lots of blippy, psychedelic electronic beats, which fit the look of the game perfectly.

The nature of the gameplay means that Every Extend Extra Extreme isn't going to appeal to a lot of people, but it's pretty fascinating nonetheless, and there's really nothing else quite like it. 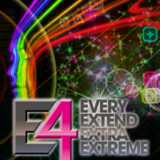