Evergate is a sweet-natured fable that plumbs the depths of its inventive mechanics with precision and grace.

Evergate surprised me. It looked at first to be slightly derivative of Ori and the Blind Forest, and I became interested in it because of those similarities, not in spite of them. In actuality, its common traits with Ori are superficial, and its strong focus on the puzzle part of the puzzle-platformer genre makes for a rich and wholly distinct experience.

You play as Ki, a small wisp occupying the afterlife and awaiting reincarnation by journeying through the Evergate. When a crisis threatens to undo the entire afterlife itself, Ki assists by going through the Evergate to relive key memories throughout time and solve the mystery behind the looming disaster. If that concept sounds heady, it is. The game doesn't give you much exposition to start, so you spend the first few hours piecing together the mythology at play. Characters freely throw out terms without explanation, and it's on you to catch up.

The main gameplay hook bears a strong resemblance to one of the main platforming mechanics in the Ori games. In those, the "Bash" move lets you spring off objects in mid-air, shooting in a particular direction. Evergate uses the same basic concept, but plumbs the depths of it as a deep well of puzzle mechanics. The entire game is built around a series of nodes with different effects, as long as you have a clear line of sight to an ethereal white object or grounding. As you progress further, finding these sightlines and discovering the order of nodes to hit becomes increasingly complex--and often acrobatic, as you use a time-slowing mechanic to line up your shot in mid-air.

The creativity of Evergate comes from seeing the wide variety of different nodes, referred to in-game as crystals, and how they can be used to create complex interlocking platforming puzzles. Your goal is always to reach a marked gate, but it is always well out of your reach or blocked by some obstacle. The platforming controls are simple but natural, as jumps carry just enough of a satisfying floatiness to match the wispy hero's animations. But crystals are the key navigational tool, with greater stacking effects if you line up more than one at a time.

The most basic node shoots you off in a direction just like in Ori, while one might start a fire to burn down obstacles and another generates a circular gravity field that you can use to burst out from any angle. Each of the 10 worlds introduces a completely new and often wholly inventive puzzle mechanic, and eases you into learning its implications before combining it with the others you've previously seen. By the end, you've become a bona fide expert in the effects of each crystal, and it's very satisfying to plan a route through a stage's obstacles, springing between nodes and barely touching the ground.

Evergate is a puzzle-platformer at heart, though, and it takes the second half of that designation just as seriously. Planning your route is nothing without execution. As you progress into the later stages, even once you know the solution, it takes a certain degree of precision to solve the stage and reach the exit. It's in those moments that the finely tuned controls feel especially welcome. I failed stages more times than I can count, but it was always my own fault by missing the moment by a hair.

By nature of its platforming roots, Evergate also feels remarkably improvisational. Puzzle games are often designed with specific solutions in mind, and in broad strokes you can see how some of these stages have a particular flow as well. But sometimes you'll discover a path that obviously wasn't the intended one, riffing your way through nodes like a jazz musician, and the systems are flexible enough to let you. There are no power-ups or character progression, so at the start of any stage you always have everything you could possibly need.

The 10 worlds are various memories scattered throughout time, telling the story of two souls who are linked, but the story is only half-successful. Evergate aims to be a poignant fable about how the people we love can disappoint us, and that we need to be patient and kind in an attempt to see the world through their eyes to understand how we've disappointed them as well. When it delivers on this message through dialogue, it actually is very sweet. But the majority of the story is told through brief animated vignettes, and it's not always completely clear what's happening in them. Between the lack of clarity in those story sequences and the en media res presentation of the lore, it's difficult to connect with the characters or conflict until the game is nearly over.

The environments themselves are also less differentiated than you might imagine for a game that spans from Chinese gardens to a neon near-future. Part of that is a product of the puzzle elements, which need to retain some visual language across multiple stages. The backgrounds are suitably differentiated, but since your focus is on the platforming, it doesn't feel much like traveling to different time periods. The clearest exception is the future, which introduces elements like drone robots and force fields that dampen your abilities.

On the whole, though, Evergate is remarkably clever. It's a short and sweet treat of a game that constantly invents new ways to interact with the world and to blend game elements together, making for a satisfying test of brainpower and reflexes. 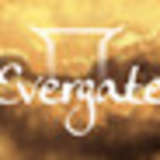 Steve completed Evergate in roughly six hours and only spent half of that time feeling stupid. Review code was provided by the publisher.