Etrian Odyssey II's brutality and grinding is initially off-putting, but push on and you're in for an intense, rewarding experiences.

Last year's Etrian Odyssey delivered classic turn-based role-playing on the Nintendo DS, complete with mapmaking, serious level grinding, and excellent character customization options. Those who played it will undoubtedly remember having to spend hours powering up their parties just to take down one of the game's many vicious enemies. Those who haven't will be able to experience this same action--with some welcome additions--in Etrian Odyssey II: Heroes of Lagaard, a sequel that barely alters the core gameplay of the original but refines it just enough to make it more palatable.

In Etrian Odyssey II, you trudge through the multiple floors of a forest labyrinth with the ultimate goal of reaching and exploring a mythical floating palace. The game's sparsely presented story revolves around retrieving medicines and a sacred chalice from the forest and this magnificent edifice; other bits and pieces of the plot are delivered through the talking-head introductions to the various side quests you can embark on.

If you're not deterred by the bare-bones plot, the game's difficulty might do you in. Don't be surprised if you find yourself in an impossible situation within the game's first hour: Scrappy beasts won't hesitate to eliminate half of your party after just a few battles, and your limited funds--reduced thanks to the need to purchase your initial weapons and armor--might not be enough to heal the injured. Your enemies don't drop money; instead, you have to sell the remains they hopefully leave behind.

With persistence and a little luck, though, you'll be well on your way to the enjoyable meat of the game. The nameless soldiers you recruit specialize in one of 12 different classes (one of which isn't available from the outset), each of which sports a combination of more than 15 upgradeable attributes, passive skills, and in-battle skills. Some skills are opened by leveling up others, leaving you with a deep tech tree to play with. You're afforded only one skill point for each level you gain, and there's an initial level cap of 70, meaning that it isn't possible to max out every skill. Progress is slow, but it also has the side effect of motivating you to choose your upgrades wisely and take every battle seriously.

The labyrinth's floors are divided into groups of five, called "Strata," and the jump in difficulty between each Stratum's typical battles is tangible. Each one starts off with denizens that can incapacitate one or two of your party members early on. After hours of fighting and regrouping, you'll grow powerful enough to use the auto-fight feature for level grinding. You'll need to employ this practice intently to combat each floor's many FOEs (Foedus Obrepit Errabundus)--powerful enemies analogous to minibosses--that block your progress to upper floors and key treasures. Most of them are ferocious enough to send even a victorious party back to town to recharge exhausted health and tech points, and a select few are too powerful for you to fight at all. It's this intense challenge--the thought that each battle might be your swan song--that keeps things exciting, and teaches you to know when to turn tail. You're given warps from town directly to certain points in the dungeon every two floors, cutting down on the backtracking; but you're only able to save in town and on every fifth floor, so you won't take any battle for granted.

Being able to handily beat the FOEs in a given Stratum signals that you're ready to take on its boss enemy. Oddly, bosses don't yield experience, but they invariably drop rare items that you can exchange both for large sums of money and powerful merchandise. Merchandise management is another gripping aspect of the game. The town's merchant combines every item you sell to create a bevy of new weapons, armor, accessories, and consumable items, an arsenal that grows as you endure combat. So while it would be easy to dismiss the "auto-level" button as an admission of guilt to monotonous level-grinding gameplay, this same grinding leads to better and better toys for you to wield.

Like its predecessor, Etrian Odyssey II's most unique aspect isn't the hardened challenge, customization, or equipment harvesting. Rather, it's the extensive grid-based mapmaking utility that it grants--no, pushes--upon you. The game tracks every square you walk on, but it's up to you to note the locations of treasures, FOEs, doors, exits, and shortcuts. Some quests require that you map out every inch of a given floor. Those intimately familiar with the original game will appreciate the much larger arsenal of cartography icons this time around, allowing you to distinguish between one- and two-way shortcuts, different types of doors, and significant monuments. Diligently drawing your surroundings is crucial to survival and at times seems like a job, but having the comprehensive maps to show off at the end of the day is something that the completist in you can be proud of.

It's not hard to pay attention to the forest as you jot down details, as the labyrinth is pretty to look at. Trees dominate the background, but a dollop of color has been added since the original game, giving some life to flowers that sprout next to the trees and showing a distinctive drop in light as day gradually turns into night (when FOEs become more aggressive). Such details as fluttering leaves and snowflakes round out the successful efforts the game makes in masking its corridor-based environments. Composer Yuzo Koshiro, of Streets of Rage and Actraiser fame, lends a unique marriage of synthesized instruments with gentle melodies to the soundtrack. A game like this normally begs for traditional orchestration, but the initially odd music quickly takes on a charm that's hard to find elsewhere.

It's rare to find a game that can sometimes feel like work yet still be enjoyable. Etrian Odyssey II: Heroes of Lagaard is definitely one of these games, whether it's due to the sheer sense of accomplishment that comes with defeating FOEs, the excitement of discovering new loot, or the complete control you have over your characters' growth. So long as you're not afraid of a game that'll hold you by the throat and slap you around every now and again, this game--like Etrian Odyssey before it--is one of the deeper, more gratifying role-playing experiences you'll find for the Nintendo DS. 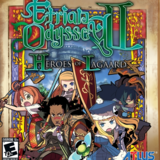 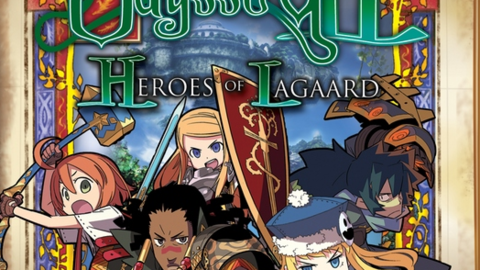 This sequel to Etrian Odyssey sets you on a journey to retrieve the Grail of Kings from a mythical floating palace.

8.2
Sign In to rate Etrian Odyssey II: Heroes of Lagaard