The game's ESPN license can't hide the fact that NFL Primetime has slippery controls and flawed AI, which ultimately translates to a mediocre NFL simulation.

ESPN NFL Primetime 2002 for the PlayStation 2 was announced quite a while ago, and the game went through numerous tweaks prior to its recent release. Judging from the game's robust and comprehensive franchise mode, the development team seems to know its football. But that apparent knowledge of the game hasn't translated into the actual gameplay system. Unfortunately, the game's ESPN license can't hide the fact that NFL Primetime has slippery controls and flawed AI, which ultimately translates to a mediocre NFL simulation.

The game's lack of a cohesive AI is probably its most apparent problem. In the game, defenses don't realistically adjust to match offensive formations, the passing game is utterly random at times, and the computer-controlled offense doesn't show much variety. For example, in one entire game, playing with the Rams, we were able to run the same exact halfback lead play consecutively for the entire first half and win the game handily. The defensive team, which was the Tampa Bay Buccaneers defense, never made any adjustments to our play-calling. The only adjustments it made were based on field position and the number of downs. The defense would creep up to the line on third and short, but since we were able to run the same play effectively, we hardly ever found ourselves in that position.

The same type of unintelligent AI rears its ugly head in the passing game. For the most part, the game's computer-controlled defensive back simply runs with the receiver and rarely attempts to make any plays--whether you catch or drop a pass is generally a random event. Exasperating matters further, pumping up the game's difficulty level doesn't mean that the AI defenses are smarter; it only means that your offensive players are more inept. Particularly in the passing game, in the higher difficulty levels the receivers will simply drop the ball more than they would in the game's rookie or pro setting.

NFL Primetime 2002 also has rather slippery controls that are tough to get adjusted to at first. The game has an arcade-style control system, where players change direction with the slightest push of the analog stick on the PS2 controller. After some playtime with the game, you'll become adjusted to the game's quicker, and decidedly unrealistic, pace, but that adjustment period is frustrating and unnecessary. Adding to the control woes are some rather apparent collision-detection problems, which affect both the running and the passing games. In the running game, backs will get stuck behind offensive linemen and run in place until you perform a move. This happens rather frequently in the game because of the poor collision detection inside the cramped confines of the line of scrimmage. Other football games have similar problems, but the effect is exaggerated in NFL Primetime. In the passing game, sometimes defensive backs will take predetermined coverage lines and can't be pushed out of the way. So if you assume control of the receiver and try to go after the ball, the defensive back will simply block your path without being flagged for pass interference.For all of its problems in the gameplay department, as mentioned earlier, the game does have a rather robust franchise mode. In fact, the development team has introduced a few innovations in this mode that should become standard in the simulation football game market. For example, the game incorporates a draft ticker, which puts your team on the clock each time it selects a player in the draft. With the draft ticker on, it is doubly important to scout college players beforehand and analyze draft positions and team needs in order to preselect your team's draft candidates. Additionally, in simulated games, NFL Primetime 2002 provides a variety of coach options. Here you can customize your team's aggressiveness level in offense and blitz tendencies and even set spies on more mobile quarterbacks for simulated games. Naturally, there are the obvious franchise mode options such as the ability to draft, trade, and sign/release free agents over multiple seasons.

Visually, NFL Primetime 2002 is unspectacular, but there are some nice visual touches. There are cutscenes in the game before and after plays, such as players walking up to the line and coaches chewing out the quarterback after a bad interception. These cutscenes enhance the game's TV-style presentation, which borrows graphics and staging elements from the ESPN Primetime highlights show. The actual player models in the game don't seem to be taxing the PlayStation 2 hardware very much. The textures are rather flat, and there aren't very many player-specific textures in the game. The 3D models look blocky, and the players' walking animations are a bit awkward. Additionally, tackle animations in the game are preset and don't seem to be based on player position. NFL Primetime 2002 doesn't impress graphically, but it is solid enough that the graphics don't detract from the game in any significant way.

Perhaps the one area where the full ESPN license is put to good use is in the game's audio department. The NFL Primetime theme music gets things started, and Chris Berman and his Primetime sidekick, Tom Jackson, provide the commentary during games. However, the announcing is pretty one-dimensional--Berman and Jackson will call only the specific play and will hardly reference statistics and team performance. Still, it's always cool to hear Berman belt out, "He could go all the way," when a receiver is streaking down the sidelines toward the end zone.

NFL Primetime 2002 is competing in a rather crowded crop of football simulations on the PlayStation 2, and some of its competitors are polished products that have been around for years. The game does have a solid and innovative franchise mode, but given the available choices for football sims on the console, it is tough to recommend NFL Primetime 2002. Even ardent fans of ESPN may be turned off by the game's clumsy gameplay system. 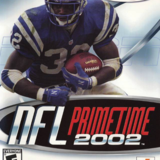