If you're a fan of college basketball, the attractive presentation, smooth online play, and deep legacy mode are all good reasons to check out ESPN College Hoops 2K5.

Sega's ESPN College Hoops 2K5 has shipped to stores just in time for the start of the 2004-2005 college basketball season. While most of the country only pays attention to the sport for the season-ending NCAA Tournament, the road to the championship is paved with hard-fought wins as early as November and December. College Hoops 2K5 plays a quality game of roundball both offline and online, and the new legacy mode should keep wannabe basketball coaches quite busy over the course of several simulated seasons.

Those who are familiar with the play of College Hoops 2K5's NBA cousin, ESPN NBA 2K5, should have a head start on the feel of its gameplay. As in ESPN NBA 2K5, players in College Hoops 2K5 move about with a good sense of weight and momentum. You can't change directions on a dime in College Hoops 2K5, particularly if the player you're controlling is already running hard. The momentum-based motion requires your player to take a step or two to stop and shift direction, which gives the game a more deliberate and realistic feel. The pace of gameplay is also reflected in the "isomotion" juke system, which allows you to perform crossover dribbles, spin moves, step backs, and more, to get past your defender. These animations are often fairly lengthy, so you'll need to observe carefully for a moment to see if your jukes are going to work before you decide to cancel out of them.

The post-up play in College Hoops 2K5 also works much like ESPN NBA 2K5, allowing you to fire up jump hooks, spin into the lane, or execute a drop step to try to gain position on your defender. Rebounding missed shots is made intuitive by the presence of a dot on the floor where the ball will hit. The dot appears as soon as each shot is released. If you can get to that spot, grabbing the board is just a matter of timing your jump properly. The passing game is also pretty good overall. In fact, you'll see players actually using the bounce pass, at times, instead of always throwing a chest or overhead pass. More importantly, you can lead players off their cuts with passes, allowing for a fluid offense.

College Hoops 2K5 isn't just a clone of ESPN NBA 2K5, though. There are a number of notable differences in the gameplay between the two. For one, College Hoops 2K5 retains the same default baseline camera angle that is standard for most hoops games. Another important difference involves the types of defenses you'll face. As in real-life college basketball, many teams in College Hoops 2K5 will apply a full-court press or a trap off of a made basket. This forces you to pass smartly to break the press. If you pass correctly, you'll be rewarded with an easy basket. However, if you make an errant pass or entrust the rock to a clumsy ball handler, you'll turn the ball over. Thankfully, your artificially intelligent teammates are usually smart about getting open for passes in trap situations.

In the half-court, you'll face a lot more zone defenses in College Hoops 2K5 than in ESPN NBA 2K5. Being able to recognize the types of defenses you're up against is a key part of the gameplay...and in being successful on offense. Against a 3-2 zone for instance, you'll want to send sharpshooters to the corners for open three-pointers from the baseline, while matchup zones are slightly more susceptible to dribble penetration. Players who enjoy running a more structured offense will find a wealth of scripted plays available, four of which can be mapped to the D pad at any time. You can also find a number of different zone defenses and traps in the defensive playbook.

The free-throw mechanic in College Hoops 2K5 is also completely different from any other game. There are no meters at all. Instead, you press and hold any button as the player at the stripe goes into his shooting stroke. Just before the player snaps his wrist to release his shot, you must release the button. If you time it correctly, the shot should go in. This new free-throw mechanic takes some time to get used to, because there are a number of different free-throw strokes in the game, each of which has a different timing associated with it. The game will also attempt to throw off your timing by presenting you with a different camera angle for every free throw attempt. Those who hated the free-throw mechanic of the recent ESPN basketball games will probably find this a welcome change, but we tend to prefer meter-based systems, because at least you have some visual feedback on why you missed your shot (when you miss your shot).

The momentum meter is gone from last year's College Hoops game, but it remains in spirit. Players and teams do go through noticeable hot and cold streaks. These are reflected by a simple biorhythm indicator that you can see in the matchup screen. A player who has sunk a few consecutive baskets can be marked as hot or heating up, so it would behoove you to apply a tighter defense or a double-team on a hot, opposing player to get the ball out of his hands. The biggest problem with the gameplay in College Hoops 2K5, however, is that there's a big difference in ability between star players and regular ones. While this can be true of real-life college basketball, the game can sometimes give you a feeling of helplessness when a sharpshooting guard like Duke's J.J. Redick is raining trey after trey on you, no matter how tightly you defend him. Meanwhile, your own mere mortal shooting guard is clanging shot after shot, including wide-open layups.

College Hoops 2K5's franchise mode has been revamped and renamed "legacy mode." There are two different flavors. One is called career, and it requires you to take a coaching job at a small, downtrodden basketball school, such as Dartmouth in the Ivy League. From here you are forced to hire relatively weak assistant coaches while attempting to give rise to the weak program to attract the attention of bigger-name schools that might be looking for a new coach. Of course, it's a lot of hard work dealing with a deck that's stacked against you in terms of talent, recruiting, and more. This mode may appeal to hardcore basketball fans, but most players will probably opt for the "open" legacy mode, which allows you to pick any of the game's more than 300 schools. If you attended a university with a division one basketball program, chances are, your alma mater is represented.

Over the course of a season, you'll need to deal with adjusting your team's practice regimen, handling its year-round scouting and recruitment of high school players, playing games against a full schedule of nonconference and conference opponents, and, of course, participating in the postseason tournament. You'll have a pair of assistant coaches to help you in this endeavor, each of whom is graded on different criteria, including skill at teaching offense and defense, recruiting, and scouting ability. In those weeks where your team has fewer games, you and your assistants will have more "time" points to spend flying out and scouting high school players to determine their true abilities and potentials. Of course, time spent recruiting and scouting is less time spent training with your current team, so you'll need to carefully balance the need to woo new players with the need to keep your team in tip-top shape for upcoming games.

When it comes time to play each game, you can simulate the match while relying on strategy sliders that allow you to choose how hard your team will crash the glass, what your primary and secondary defensive schemes are, how often you apply a press, and more. You can, of course, choose to play each game yourself, or, as a compromise, you can play each game in coach mode. In coach mode, the game plays out as normal, except you don't have any direct control over the players. Instead, you call out plays, control substitution patterns, and even make more-subtle adjustments, such as creating specific defensive matchups and choosing how much pressure to apply on each opposing player. If one opponent is starting to get hot, for example, you can instruct your best defensive player to guard him tightly, or you can always apply a double team whenever that opponent has the ball. Coach mode is also available from the quick play menu, and while it is a nice change of pace from playing the game yourself, there isn't any time savings from it, so it's hard to say that it's a good compromise between time spent and control over the outcome of your game.

As far as presentation goes, ESPN College Hoops 2K5 is every bit as attractive as its pro counterpart, ESPN NBA 2K5. Players are well-detailed, especially in close-ups, and they animate fluidly in all aspects. The developer has also done a pretty good job at modeling the arenas of major schools, so you'll also see cheerleaders and team mascots applauding their teams from the baselines in front of the crowds. There's not much music to speak of in the game, unless you count the ESPN-branded tunes in the menu screens. Major schools will have their fight songs played in-game, but the highlight of College Hoops 2K5's sound is definitely the commentary from Mike Patrick and Jay Bilas. Even if he is a bit long-winded at times, Bilas does a wonderful job at providing insightful color analysis.

College Hoops 2K5 also offers online play on PS2 and Xbox. The suite of features on both is pretty standard, so you can play ranked matches, view opponent stats and tendencies via the leaderboards, and set up tournaments. What's most important is that the online play is extremely smooth. In our online play-testing on both platforms, the gameplay was lag-free and pleasantly responsive...perhaps representing the smoothest action we've ever experienced with an online basketball game. Hopefully this experience will hold up as more and more players get online with the game.

Like its NBA cousin, ESPN NBA 2K5, College Hoops 2K5 offers up a great game of roundball. While the balance of gameplay still hinges on star players, there are still enough intrinsic nuances to give the game a college basketball feel. If you're a fan of college basketball, the attractive presentation, smooth online play, and deep legacy mode are all good reasons to check out ESPN College Hoops 2K5. 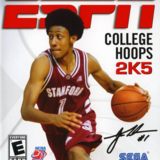