In contrast to most LucasArts adventures, the Monkey Island games have always been really over the top. Whereas games like Full Throttle and Grim Fandango emphasized character and story, the Monkey Island games have increasingly leaned toward trying to make you laugh by means of an endless barrage of puns and pop-culture references. This is true of Escape from Monkey Island, the fourth game in the series. Much of it is funny, although a lot of it isn't. This inconsistency winds through the whole game, from the puzzles to the interface. When it's good, Escape from Monkey Island is very, very good. But the game's missteps do detract from the overall experience.

In this chapter of Guybrush Threepwood's adventures, the self-proclaimed mighty pirate and his new bride, Governor Elaine Marley, have returned from their honeymoon only to find that Elaine has been declared dead. This incorrect declaration has ended her lifetime term as governor, so she must now run against Charles L. Charles, a foppish glad-hander with a dark secret. What adds to the political intrigue is that the pirate hangouts in the Tri-Island area are being bought up and made into tourist-friendly venues like StarBuccaneer's and Planet Threepwood, thanks to an Australian land developer named Ozzie Mandrill. To top it all off, everyone seems to be looking for a voodoo artifact called the Ultimate Insult. These events aren't as unrelated as they may seem, and Guybrush must help Elaine stop the gentrification of his stomping grounds and find the Ultimate Insult before it falls into the wrong hands.

To reach these ends, Guybrush must once again explore the strange Caribbean Islands that surround his home, Melee Island. He'll visit Jambalaya Island (the island most affected by Mandrill's takeover) and Lucre Island and once again return to the titular Monkey Island itself. Many of the locales will be familiar to longtime fans of the series, as will a number of the characters. LeChuck, Murray the skull, Herman Toothrot, Otis, Carla, Meathook, and many, many others make guest appearances. In fact, there may even be too many cameos by old favorites.

There's an old joke. A guy walks into a bar and notices people keep yelling out numbers, and everyone in the bar busts up laughing. He asks the bartender what's going on. The bartender tells him that the regulars have told the same jokes for so long that now they just refer to them by number. Much of the humor in Escape from Monkey Island is like this. Many jokes allude to earlier events in the series, and they're only funny if you're familiar with the references. For instance, the fact that Otis the pirate likes flowers is a gag from the first game, and here it seems like the designers are simply pointing it out, hoping you'll remember how funny it was the first time around.

It's true that Escape from Monkey Island does have plenty of new gags and characters, and many of them are really funny. The talking figurehead on Guybrush's new ship is particularly amusing, as are characters like Pegnose Pete; Marco de Pollo, the world's greatest cliff diver; and Miss Rivers, the teacher at the pirate reformation academy. The humor is enhanced by the universally excellent voice work. But some of the new characters aren't quite as interesting. Ozzie Mandrill, the evil real estate developer, is only funny if you think simply being Australian is funny - although his particular way of talking does lend itself to a very surreal match of Insult Sword Fighting, one of the more humorous sequences in the game.

The bout with Ozzie is the only appearance of the preferred dueling technique in the Tri-Island area. This time, you'll learn Insult Arm Wrestling and Monkey Kombat, a variation on the Insult competition and a parody of the fighting game Mortal Kombat. The concept is funny, but unfortunately Monkey Kombat may be the single biggest problem with Escape from Monkey Island. You must learn to trade barbs in the monkey language, and it all builds up to a really funny parody of Mortal Kombat's famous opening. But the art of Monkey Kombat itself is a frustrating one.

Monkey Kombat is a more complicated version of rock-paper-scissors - it features five fighting stances, each of which beats two other stances. You must say three of the four monkey words ("eek," "ooop," "chee," "ack") in a certain order to change stances, and each transition is unique. So, Drunken Monkey to Anxious Ape (and vice versa) might be "ack eek oop," while Charging Chimp to Anxious Ape might be "eek chee ack." These only "might be" the right combinations, because the combinations and hierarchy are randomized with each new game. The only way to learn the art is through trial and error and copious note taking, and it becomes tiresome quickly. However, Monkey Kombat plays a principal part in the entire last third of the game.

The only problem with the use of the Grim Fandango engine is the interface. Escape from Monkey Island dispenses with the basic concept of Grim Fandango's simple, text-free interface and instead reverts to making you choose from a series of text options and sort your inventory using a more conventional menu. Cycling through the possible actions in any location is a bit cumbersome, and at times it seems like the game would have been much easier to control with a standard mouse interface - though the designers did add some funny bits that you'll discover when you're sorting through your inventory in front of other characters.

You'll be cycling through your inventory often. The puzzles in Escape from Monkey Island primarily involve using objects in your inventory in creative ways, and many of these puzzles are good. But there are a few that make no sense at all, even in the bizarre world of the game. Finding Pegnose Pete's hideout requires a leap of logic that is baffling, and even after you finally locate the hideout, the solution makes little sense. But just as LucasArts was the first adventure-game maker to ensure that players would never die in a game, the company seems to be taking an equally strong stance against players getting stuck. Clues abound throughout the game, and a full walk-through is even included in the box - a bonus that seems as cynical as it is helpful.

Escape from Monkey Island is a great game that can be frustrating. At times it'll seem as if there were simply too many designers working on it and everyone wanted their ideas included. The puzzles are hit and miss, and so are the jokes. This is best illustrated by the traditional LucasArts post-credits joke, in this case a string of pop-culture references that goes on and on, as if no one could decide which of them were funny so they just decided to leave them all. But in most cases, the game can be a real pleasure to play, because enough of the puzzles are good and enough of the jokes are amusing. As such, veterans of the Monkey Island series will surely enjoy the game in spite of its occasional problems. However, players who're new to the Monkey Island series may get the sense while playing the game that they're watching a bunch of old friends regale each other with old in-jokes; it's easy to feel as if you're being left out of the fun if you don't catch the references. So while new players should approach the game with caution, if you're a fan of the previous installments, then Escape from Monkey Island is highly recommended. 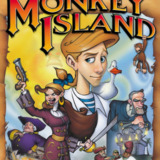 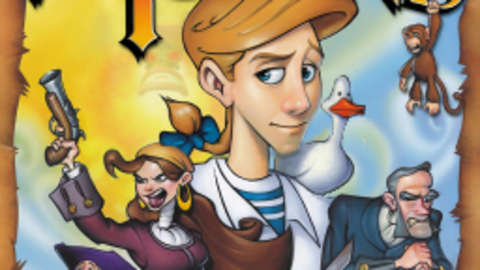 Teen
Comic Mischief, Suggestive Themes, Use of Alcohol and Tobacco