Enter the Gungeon is a game I should love. It’s a dungeon-crawling, bullet hell roguelike that has a whimsical soundtrack and great visuals. But all of this personality and style is undermined by conflicting concepts, and Enter the Gungeon's lasting appeal suffers for it.

Ultimately, Enter the Gungeon is spoiled by how it fanatically adheres to the rules of all the genres it blends together. It’s a roguelike, meaning death in the Gungeon results in a complete loss of progress. There’s nothing particularly wrong with this--it prides itself on being a bullet hell shooter with steep difficulty spikes--but its insistence on stripping away all progress at the start of each run is oil to water when mixed with its focus on collecting zany items and weapons.

There are a large number of weapons to discover and use, and these range from familiar firearms like shotguns and automatic rifles, to more absurd creations like a gun that shoots sharks. Likewise, there’s a massive number of items to be discovered, offering different stat bonuses and perks to be used in varying situations.

The most powerful and unique weapons come with their own distinct animations and application, and figuring out the best way to use them during hectic combat situations is as fun as it is challenging. Opening each new chest in the dungeon evokes the same feeling of anticipation as opening a brand new pack of trading cards. What will you find? Will it be rare and awesome, or all too common?

But there’s a catch here; the scales are tipped in favor of the player finding a more mundane or mediocre weapon a large percentage of the time. Strange as it is to say, there may be too many weapons in here. While some feature entertaining and quirky attributes, many feel like variations of your starting weapon with barely any major distinctions between them. They’ll get the job done, but it’s a letdown to discover a wicked laser gun one round and be saddled with a handful of slightly more powerful rifles for the next few. A bit of trimming down to make extraordinary weapons a more frequent drop would help to foster the “one more round” mentality found in great roguelikes.

You eventually gain the ability to seed each dungeon with items and weapons, but you always have to start with the same wimpy load-out made up of so-so weapons and various character-specific items. It’s like playing Pokemon, but instead of adding new Pokemon to your team and using them at will throughout your journey, you’re constantly forced to begin again when you lose any battle, with only the Pokedex serving as proof of your discoveries. And whenever you have to start over, you’re more likely to find a slew of ordinary Rattatas or Zubats while only occasionally encountering something more notable.

It’s a contentious combination. Enter the Gungeon’s fetishization of wacky guns and the meager drip feed exposure a player has to them begins to deliver diminishing returns. Having some amount of meaningful progression beyond filling up a log book with found items would help greatly, even if it was simply granting the player minor stat boosts or occasional upgrades.

This conflict is unfortunate, because everything surrounding the core of Enter the Gungeon is great. Enemy types are as varied as the items themselves, each with their own particular attack patterns that eventually lead to an epic barrage of bullets to be dodged and countered. Well-balanced and finely tuned control mechanics--like a dodge roll with several frames of invincibility or bullet-wiping blank rounds--arm players with just enough options that they can successfully evade fire while doling out punishment in harrowing encounters, and each dungeon level has its own theme to keep the visuals fresh.

Care has been placed in the smallest details, mixing retro-inspired pixelated artwork with more contemporary styles of visual feedback.

Visually, Enter the Gungeon is stunning. Care has been placed in the smallest details, mixing its retro-inspired pixelated artwork with more contemporary styles of visual feedback. There’s tremendous impact to each of the on-screen actions. Books burst into clouds of loose pages when shot or kicked, explosions rattle rooms, and a generous color palette creates an interesting gothic fantasy/cartoon fusion that aligns with the game’s darkly humorous tone. When coupled with a pulsing, energetic soundtrack, Enter the Gungeon is an audiovisual treat.

Its flaws elsewhere are all the more disappointing. So much care is apparent in its construction, but in its attempt to merge multiple genres and styles together, Enter the Gungeon’s most important elements--namely its roguelike flavors and massive offering of distinct weapons--don’t gel. It’s a game at odds with itself. 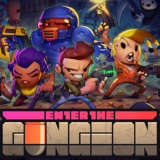 Cassidee is a fan of roguelikes, especially ones with unique hooks like Rogue Legacy and Heavy Bullets. She spent about twelve hours raiding the Gungeon with a copy provided by the publisher.