Enslaved: Odyssey to the West Review

Enslaved is an affecting adventure that makes strong use of its characters and story to create a believable world.

This is how the world will look after the war. The buildings still stand, but they are in a state of ruin. Walls, ceilings, and floors have crumbled away, and the healthy foliage that covers every surface gives the appearance of a thriving ecosystem, though no humans are around to enjoy this taste of nature. Pools of water mixed with toxic chemicals provide a deadly oasis that can be admired by sight but not touch. Mechs travel in small groups, attacking anything that moves, and the turrets that perch on higher ground shred anyone unfortunate enough to wander into their path. In this bleak tableau, two escaped slaves named Monkey and Trip must travel through this decrepit wasteland to find a hidden village that offers the only glimmer of hope. Enslaved: Odyssey to the West is a memorable adventure that uses a strong sense of place and excellently crafted characters to lure you into its postapocalyptic world. You have to put up with rigid platforming, slow-starting combat, and a camera that zooms in too close to the action, but these problems are just small pieces of a big picture. What Enslaved lacks in refinement, it more than makes up for in beauty, heart, and thrills.

Trip is either incredibly selfish or has a taste for irony. After her village is raided by slavers, she finds herself trapped on a ship headed for a bleak future in which strict rules and swift punishment define her waking hours. Luckily for Trip, she has the technical knowledge to initiate an escape, which triggers an explosion that causes the entire ship to crash into Earth. But she doesn't survive her break toward freedom alone. After the crash, Trip comes upon Monkey, a fellow captive onboard the ship. His raw strength and athleticism provide a sharp contrast to the lithe Trip, who relies on her intelligence rather than her physical prowess to survive. She affixes a headband to his unconscious body and informs Monkey when he awakes that he is now her slave. He must obey every order she dishes out or else he will experience unthinkable pain. If he strays too far away or her heart stops beating, he dies. It is through this unlikely pairing that Enslaved establishes a strong emotional connection. This delicate relationship is the foundation upon which this great game has been built and serves as the driving force for your adventure.

The cutscenes in which these characters grow and develop are superbly produced. This is a story that is told through movement as much as dialogue, and the subtle facial features make these digital characters feel like real human beings. There is a moment when Trip smiles to herself while climbing on the back of Monkey's motorcycle, and that brief flash tells you all you need to know about the thoughts swirling through her head. In another scene, Monkey is haunted by visions he can't explain. When his eyes bulge and his muscles flex, you understand the fear he's experiencing. These elements breathe life into the heroes and provide a strong emotional link for your journey. And it's this attachment that makes the game so engrossing. There are times when Trip finds herself in grave danger and you must rescue her from imminent death. The fast action in these parts could certainly stand on its own, but when it's mixed with your protective feelings toward the heroine, it makes your duty carry that much more weight.

You take control of Monkey during this adventure and Trip accompanies you for the majority of your travels. There is a symbiotic relationship between these characters because neither could survive this treacherous world alone. Monkey does the bulk of the grunt work. He can take down mechs and other assorted enemies by using his trusty staff, which excels in either close-quarters or long-range combat. He can also climb sheer walls, leap across perilous pits, and swing from protruding pipes. Trip is his cerebral counterpart. Her eyes shine when a technical barrier halts their progress, and she can conjure a decoy to divert enemy fire away from Monkey, but her usefulness doesn't extend much further. Because Trip is so limited, you assume the role of her protector. It's an interesting juxtaposition considering that she has actually enslaved Monkey, but it works surprisingly well. Monkey has to continually make sure that Trip can pass the obstacles in her path--sometimes carrying her or even throwing her to safety--and this protective relationship helps develop the connection between the characters.

Monkey has no qualms with getting his hands dirty. You start the game with two attacks, as well as block and dodge commands, and you unlock more moves as you get deeper into the journey. The combat is basic in Enslaved. Many fights can be won by alternating your attacks with the occasional defensive maneuver tossed in when your health gets low, but the brutality of combat and enticing rhythm overshadow the button-mashing nature. The camera is zoomed in ultratight, which limits your ability to see enemies sneaking up behind you, but it adds extra impact to all of your offensive blows. Enemies recoil as you whack them with your staff, and you can see the reverberations flow through their bodies with every strike. Some fights culminate in a slow-motion shot that shows Monkey's staff slicing clean through these mechanical monsters, with a feral look etched on his face. Despite the brutal pleasure of taking out your unrelenting foes, the combat in Enslaved takes a while to get going. The confrontations you find yourself in from the onset can be won with little thought; it isn't until your enemies become more numerous and powerful that the depth is revealed. And it's satisfying to dodge and block against the tougher opponents until you can land a deadly counterblow.

The free-flowing platforming is a sharp contrast to the brutal combat sequences. You can easily jump from treacherous platforms to precarious handholds, and it's liberating to move through the environment so effortlessly. Each platforming sequence is set up like a puzzle. There's only one way through each area, and you have to figure out which path to take to reach the other side unscathed. Crumbling walls force you to move quickly, and there are other dangers, such as spinning blades and dancing flames, that threaten to injure the slow moving. However, even though these levels are well designed, there is rigidity to your movements that can be frustrating. You can only jump when you have another platform waiting for you, which removes much of the puzzle-solving appeal. This restriction continues even when you're on the ground, and squirrelly controls make it difficult to move with precision. Optional orbs compound this problem. You need to collect these to upgrade your abilities, but inconsistent movement makes it a chore to go out of your way to nab them all. The platforming is still fun because of the smooth rhythm of leaping through this world, but limitations strip away much of the simple joy.

Neither the combat nor the platforming are great on their own, but smart pacing ensures that you're always experiencing something new. Thrilling set-piece sequences are injected between the standard action fare, which create rousing moments of unbridled excitement. There are times where you can ride a nifty hoverboard around, and it's a blast to breeze along rocky corridors and propel yourself off ramps in exhilarating chases. Boss fights force you to make smart use of all of your abilities in order to come out on top. When you square off against a giant mechanical dog, you need to use your staff for both close-up and long-range attacks, and you even make use of your hoverboard to finish it off. The boss fights aren't very difficult, focusing more on spectacle than in-depth combat, but they provide satisfying interludes between the main action. Clever puzzles break up the fast-moving pace for more thoughtful fare. These make you work in tandem with Trip, and they require just enough careful deliberation to make it empowering to solve them, without being so challenging as to halt your progress. Enslaved is consistently fun and exciting because of the diverse gameplay situations that are all done well.

The eye-catching visuals do a fantastic job of providing an artistic backdrop for each section you visit. Enslaved is a gorgeous-looking game that provides a much more colorful take on a postapocalyptic world than what is typical. The opening levels place you in a ruined city that is overrun by plants, trees, and other foliage, which is encroaching on the man-made structures that used to dominate these areas. But Enslaved offers locations that are far different from the green-covered city in which you begin. Another area takes place in an underground cavern that offers a dark, foreboding mood and contrasts wonderfully with the colorful beginning. There are levels that take place in a well-guarded village at twilight, as well as atop a towering scrap heap; you even catch a glimpse at an underwater world. The variety and artistic splendor of each place in Enslaved is striking, continually impressing with everything from its beautiful vistas to to confining interiors. The subtle background music does a great job of complementing the visual wonders. Ambient melodies pull you through these well-crafted locales, and the punctuated bursts during battles heighten the already-tense duels.

Enslaved: Odyssey to the West is a great example of how a gripping story and strong artistic design can overcome slight gameplay problems. Your movement is rough around the edges and you have to get through half of the game before the combat really shows off its true potential, but those are minor blemishes on this fine package. The well-realized characters are incredibly lifelike, using subtle animations and believable voice acting to make these digital beings feel almost real at times. Watching Monkey and Trip grow during their journey is eminently satisfying, and the link you create with them makes all of your actions carry that much more weight. Enslaved: Odyssey to the West is a great adventure that has just enough excitement and diversity in the gameplay to keep you engaged, while the striking visuals and memorable story push you through to the ultimate conclusion. 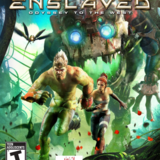 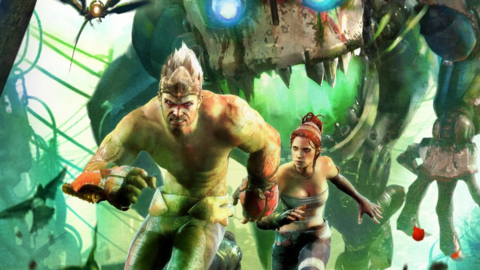 Enslaved: Odyssey to the West

A tactical action-adventure game, Enslaved centers on the complex relationship between the two main characters and challenges players to employ a mix of combat, strategy and environment traversal.

8.2
Sign In to rate Enslaved: Odyssey to the West