Quake Wars' strong shooting model and focused objectives make it a lot of fun to play.

If you took 2003's freely downloadable Return to Castle Wolfenstein: Enemy Territory and mashed it together with the Battlefield games, you might come up with something like Quake Wars. Of course, the whole business of the original Enemy Territory's Allies and Axis have been replaced by the humans and Strogg from the Quake universe, but the basic nature of the gameplay is unchanged. Two opposing teams still duke it out while attempting to complete a series of objectives, though this time you can jump into a bunch of different vehicles and aircraft to carry out your assaults. The concept itself isn't really new, but it's put together extremely well, and its mission-focused gameplay will appeal to veterans of these types of shooters, as well as those who have previously been intimidated by them.

The year is 2065. The Strogg race has attacked Earth in order to process its raw materials into a fuel called stroyent. If you've played any other Quake titles, you'll know some of the history here, but it's mostly irrelevant in the context of Enemy Territory's multiplayer action, so let's cut to the chase: You join either the human Global Defense Force or the alien Strogg team, and then shoot your enemies in the face.

Obviously, it's a tad more complex than this. First, you need to choose one of five classes before each match. The GDF classes will be familiar to any RTCW: Enemy Territory player; the Strogg classes have different names than the human ones, but they all boil down to the same roles. GDF soldiers and Strogg aggressors are your typical frontline troops; medics and technicians heal in the field; and so on. Don't assume that correlating classes are all exactly the same, though. GDF field ops can drop ammo packs, for example. The similar Strogg oppressor doesn't need to drop ammo, since the alien weaponry doesn't require any. Instead, oppressors can set up a tactical shield to protect infantry or vehicles.

Other differences are subtle, but no less important. For example, GDF medics can revive downed teammates almost instantly, while it takes a few crucial seconds for Strogg technicians to do the same. On the other hand, technicians can use their healing stroyent tool on enemies, too, which creates a forward spawn point--a handy skill, indeed. Then you have GDF covert ops versus Strogg infiltrators. Both can disguise themselves as the enemy, but covert ops can use an explosive surveillance camera to spy on the opposition, while infiltrators can send out a handy drone to do battle with enemies from a distance. These differences aren't huge, but they give each faction a different feel and are balanced well.

Once you've spawned into the map, the game will give you incredibly clear objectives--and in most cases, more than one. Teams share a primary objective, and as the battle rages and one team is successful in meeting its current goal, the objective will shift. There are secondary missions to complete as well, and they will change depending on your class. You may need to take out enemy radar, heal teammates, blow up gates, and so on. The end result of this focus is that you never wonder what you should be doing, and even newcomers to this kind of action will feel that they contributed. Additionally, as you continue to play, you will earn medals and gain persistent ranks--provided you are playing on ranked servers. You'll also earn bonuses within your current campaign as you gain experience, such as improved weaponry, faster sprinting, and more, depending on the amount of XP earned and the class you are playing.

All the emphasis on missions results in intense firefights that occasionally involve Quake Wars' small assortment of vehicles and aircraft. The specific mission objectives usually keep the action contained to a few pockets of concentrated activity, though, so if you like the Battlefield formula of controlled chaos, you might miss the insane flurry of action coming at you from all sides and above. If you prefer to get comfy in a tank turret or in the cockpit of a chopper, you'll still be able to fulfill that role. But with objectives shifting from outdoor areas to indoor sewers and bunkers, you can't singularly focus on getting into the air or plowing down every enemy in sight. Don't take this to mean that Quake Wars doesn't offer its share of heavy action, however. You'll still get your fill of visceral, bloody battles--though they are usually confined to the ground.

You can also create a fire team as in the original Enemy Territory, so squad organization functionality is there, though it's not as necessary as you would expect. One reason is that when you undertake a secondary mission, you can see who is sharing it, thereby creating a sort of ad hoc squad. The other is that Quake Wars does not support voice chat, so you simply don't have the opportunity to issue commands to your fire team easily. Of course, you can use a third-party voice client, though that would have you chatting to all of your teammates, rather than a single squad. Now that the Battlefield series has set the squad-based chat standard, it's unclear why the functionality would be left out. The missions are so clear that your path is usually fairly straightforward, but if you're joining a random game and still want to contribute to the fullest extent, it would be nice for the game to give you the chance to talk to the other members of your fire team.

Shooting stuff in Quake Wars feels terrific. Both GDF and Strogg weaponry have the right weight and firing speed. Even the default weapons for nonassault classes, like the Strogg Lacerator, are effective in battle and handle well. Small details, such as the amount of time the barrels on the Hyperblaster rotate before they begin firing, feel properly balanced. Vehicles and aircraft are easy to manage as well. Oddly enough, though, some ground-movement controls are tied to flight and vehicle controls, so if, for example, you want to change the key binding for your Tormentor's thrust maneuver, you'll be changing the sprint key as well. It would be nice to have vehicle controls separately customizable from within the game, and we're at a loss to explain why players would be forced to edit configuration files to make such a simple, standard change.

There are three ways to play: on a single map, a three-map campaign that takes place across a single continent, or in a two-round duel on a single map in which teams compete to see who can complete their assault faster. There are 12 maps in all, and they hold up to 32 players at a time--though every server we have seen supports no more than 24 players. Most of the usual near-future environments are covered, from cratered wastelands to frozen tundra. The maps themselves are balanced well, with plenty of buildings for cover, and lots of hills and valleys to mix things up.

Yet prior Quake games captured the aura of futuristic warfare better than Quake Wars does. That is partially due to the open-environment design--and the very nature of the setting. However, there is no real eye candy to set your sights on here, so while the maps look very good, nothing really paints a detailed picture of a war-torn world. Indoor areas in particular are mostly bland and functional, but even terrain lacks detail, thanks to flat textures. Even explosions and fire effects lack pizzazz. Lighting is often spectacular, however, especially in the foliage-rich areas, and vehicles and turrets are richly detailed. The draw distance is also incredible, without any noticeable fog or polygon pop-in. Character models are good too, but the animations are a bit awkward. Luckily, the game runs reasonably well. The din of battle sounds good, and the weapons are obnoxiously loud, in a good way. The voice-over commands that you can play are grating, though, and the tone of some of the lines (like the GDF's snotty "You're Welcome!") seems out of place.

If you're an Enemy Territory veteran, this is the logical next step for you. And if you've been turned off by team shooters in the past, this one may change your mind. The accessible, objective-focused gameplay won't be for everyone, especially those into the chaotic, freeform warfare of other team shooters. But all told, Quake Wars is great fun and should provide FPS fans with a lot to sink their teeth into. 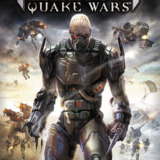