Enchanted Arms is a capable and often enjoyable role-playing game, but it's also one that you'll likely forget as soon as you finish it.

Enchanted Arms is the first Japanese role-playing game for the Xbox 360, and while it isn't overly impressive or memorable, it's a capable representative for games of its type. The game sticks closely to the console role-playing template made popular by the Final Fantasy series, to the point that even the victory music that plays after each battle sounds eerily familiar. Androgynous characters, melodramatic plotlines, random encounters, and ridiculously overblown battles form the basis of Enchanted Arms, and if you have any previous experience with this type of game, you'll feel like you've seen it all before. Despite that, if you give it plenty of time, you'll find that Enchanted Arms is still worth playing if you have any interest in role-playing games.

You've heard this story before. A feisty young man with no memory of his past discovers within himself a hidden power capable of saving--or destroying--the world. His name is Atsuma, and he's a student at Enchant University, where he studies a type of weak magic known as enchanting. However, some people seek a more powerful form of magic, which has been lost for the past 1,000 years. Turns out that a millennium ago, humans were quite proficient with magic and used it to create artificial servant creatures, known as golems. As you might expect, the golems one day went berserk and turned on mankind, nearly destroying the world in what's known as The Golem War. The most powerful of these creatures, called devil golems, were sealed away to prevent another disaster. Flash forward to present day, and some conniving megalomaniacs start fussing with the seals to draw upon the powerful magic that lies within. At this point, Atsuma's destiny as savior of the universe is revealed, along with a mysterious power that resides in his right arm.

As Atsuma, it's up to you to keep these nasty golems in check, which you do by running around the world battling not only golems, but also the humans who are attempting to manipulate them. Enchanted Arms plays like a traditional console role-playing game. You spend most of the time running through dungeons or down long, linear paths from one city to another, engaging in random encounters, collecting money and items, and developing your characters to make them stronger. Between battles, you'll often be treated to some heavy dialogue or the occasional prerendered cinematic sequence.

The story sequences in the game can be quite lengthy, with conversations lasting several minutes. You might be tempted to simply skip through all the chatter, but if you do that you'll miss out on a lot of the charm that Enchanted Arms has to offer. The dialogue, while sometimes a bit overdone, is relatively natural and engaging for a role-playing game. There aren't many characters in the game, but that works to its advantage by letting you focus on the dynamic between four entertaining personalities. There's also plenty of humor, and although a lot of it is downright silly, it doesn't feel forced and is funny enough to prevent your eyes from glazing over during every story sequence.

The nuts and bolts of the game are simple but effective. Throughout most of the game, you'll be running on a linear path from one point to another. Sometimes you'll run from one town to another, and other times you'll be running from the beginning of a dungeon to the obligatory boss fight at the end of that dungeon. While in these areas, you'll be drawn into battle with a random assortment of enemies every several steps. The encounter rate is usually reasonable, letting you cover plenty of ground between battles. Sometimes, however, you'll find yourself going from one battle to another every few steps, which quickly gets tiresome. It doesn't help that the game requires you to backtrack through these large, empty spaces several times, which is boring and takes quite awhile since you're prone to being attacked every step of the way.

The nature of the combat system in Enchanted Arms results in some often very lengthy battles. That said, the system is fun and challenging most of the time. Each battle takes place on a flat, 6x4 grid that is divided down the center. Your party is randomly arranged on one half of the grid, while your enemies are on the other. You can't pass the center line into the enemy grid, so you have to plan your attacks accordingly. You can have up to four characters in your party, and during your turn, you can move those characters and assign actions in any order. Once you've done that, you press go and the actions are carried out. The battles all come down to positioning, because each attack has a specific range and pattern. Some attacks will hit only a single square, others will hit a line of squares, and still others will hit an entire enemy area. By balancing your party so that you have a proper mix of ranged and direct attacks, you can be ready to face any enemy. The battle system doesn't require much in the way of strategy, but it does demand a bit more than simply selecting the attack command over and over. It feels almost like a puzzle game because you have to figure out the best order and position for each of your characters to maximize damage and minimize risk.

Even if you have a team of direct attackers against a group of ranged enemies, you usually won't have a problem winning. The game is very forgiving, and enemies will often move within range of your attacks, if for no other reason than to avoid a stalemate situation. Between battles, your characters automatically regenerate both their health points and their ether points, which are required to perform all attacks. However, over time your characters will lose vitality points, and characters with no vitality points left won't regenerate any health or ether points between battles until you reach a replenishing station. This system requires you to keep plenty of extra characters on reserve to be swapped in for characters who have expended all their vitality points. The system works well, if only because it gives you incentive to make use of all your characters, rather than using just a few powerhouses throughout the entire game.

Having extra characters is never a problem in Enchanted Arms. Throughout the world, you'll encounter golems, and usually if you defeat one of these creatures in battle, you'll get its core, which can be used along with some other items to synthesize that golem. This is just a roundabout way of recruiting enemies to join your party. There are more than 100 different golems in the game, and they're all quite diverse and useful. Each golem has its own attacks and abilities, and each one can be leveled up and made stronger, just like the human characters. There seems to be a golem for every occasion, from mermaids that can absorb hit points from enemies, to a massive Sasquatch with frosty breath, and even a pizza-headed creature that can shoot fire.

You can take all of the golems you collect in the game online to engage in multiplayer battles via Xbox Live. It feels like a feeble attempt to add a multiplayer component to the game, because all you can do is have a straight-up ranked or unranked battle. The battle system isn't robust enough to allow for any engaging or involved multiplayer competitions. It can still be interesting to see which golems other players prefer to use, though, and it can lead you to discovering some new tricks that you can put to use in the single-player game.

The presentation in Enchanted Arms is reminiscent of other games of this type, and considering that this is an Xbox 360 game, that isn't a good thing. The character models are fairly detailed, but the animation is awkward. During story sequences, you'll see large versions of the characters as they jerk and spasm from one fixed position to the next without any sort of transition. The environments aren't impressive, either. You'll see a lot of huge, wide-open areas that show no signs of life whatsoever. The entire world feels empty and uninhabited, which makes for dull viewing. Sometimes you'll see some shiny textures, but for the most part, this game pales in comparison to other Xbox 360 games, regardless of whether you're viewing it on a standard definition or high-definition television. Furthermore, there's the problem of getting a workable perspective in battle. There are a few preset camera angles to choose from, but none of them offer a full view of the battlefield. The heads up display often obscures enemies, to the point that you might not even see an enemy until it attacks you. The camera is also zoomed out to get the whole battlefield in the picture, but that also makes some of the characters appear tiny, and their colors tend to blend into the background. The game does look good in a few respects, though. Most of the attack effects are flashy and exaggerated, but they all look good. In particular, there are EX attacks, which are special attacks that feature more lengthy and over-the-top animations than the standard attacks. In addition to the special effects, the prerendered cutscenes in the game look great. There are only a handful of these, but they're each worth watching multiple times.

The sound in Enchanted Arms is decent for the most part. The English voice acting is pretty bad most of the time, but there's an option to listen to the Japanese voices instead. Even if you can live with the annoying voices during the story sequences, you'll probably find it hard to bear the chirpy phrases uttered by your characters with every single attack. It quickly gets old hearing the same two or three phrases repeated a dozen times or more in a single battle. The music is typical of a role-playing game, and it's mostly good. There are dramatic orchestrated tracks, as well as ambient loops that softly fade into the background. None of the music ever gets annoying, which is perhaps the best thing that can be said for the music in a game that takes 40 hours or more to complete.

While you can finish Enchanted Arms in about 40 hours, it will take you considerably longer if you spend the time to find all of the golems in the game. The game is paced reasonably well, and although it's very linear, you'll never be stuck wondering where to go or what to do next. This keeps the game moving along most of the time, but it still tends to drag in spots. There's too much backtracking required, and it often takes an inordinate amount of time to get where you want to go. If you have the patience for it, though, you'll find that Enchanted Arms is a good first effort for role-playing games on the Xbox 360, even if it isn't a very original one. 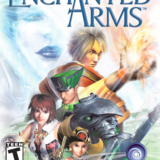 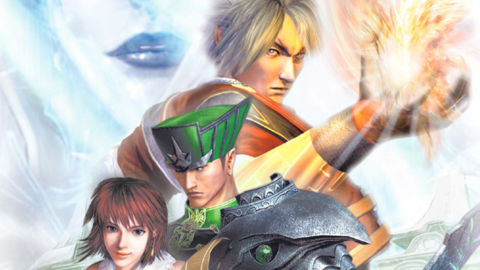 From Software is porting its role-playing game, which featured a student of magic whose destiny is to save the universe, from the Xbox 360 to Sony's next-gen console.