Emergency Heroes is a lazy and repetitive open-world driving game that will bore even the younger audience that it's aimed at.

Emergency Heroes is Ubisoft's attempt at an open-world game for young gamers. But with an incredibly sterile city, repetitive missions, and an inconsequential plot, the game manages to make playing as a police officer, a firefighter, and a medic no fun whatsoever. The single-player game is a five-hour slog through dull missions, and the introduction of friends in multiplayer does little to alleviate the boredom. In the end, it's a game that's so generic and devoid of fun that it actively sucks the life out of you as you play it.

You play as Zach Harper, an emergency hero in the city of San Alto. At the beginning of the game, Zach is recovering from being forced out of the city's combined services after a training accident killed one of his colleagues. Predictably, though, he's called back into action when a gang, led by a mysterious figure, starts terrorising the city. You can probably guess the twist from that description alone, but the story is so inconsequential that any spoilers are unlikely to impact your enjoyment. Emergency Heroes features some of the most cliched plotting, one-dimensional characterisation, and laughable dialogue ever to feature in a video game.

The gameplay itself is based entirely around driving, with no on-foot sections at all. You control vehicles either by holding the Wii Remote on its side or by using one of the many Wii Wheel-style peripherals, such as the one bundled with Mario Kart. The control method is functional, but the vehicles suffer from poor turning circles, and it's a shame that there's no option to use a Nunchuk. Even worse, all 12 vehicles handle the same, and even the smallest police car can smash a civilian truck right off of the road. There's also no punishment for crashing into an endless amount of innocent vehicles, which makes the game incredibly easy to play.

The story progresses through 40 preset missions, or "perils," as they're called in the game. However, there are only a few different mission types, such as putting out fires, saving civilians, or inflicting enough damage on an enemy car to knock it off of the road. This lack of variety quickly becomes tiresome, and the city itself doesn't present any of the opportunities usually associated with sandbox games. You might not earn a gold medal for every mission on your first try, but it's unlikely that you'll actually fail one.

Given that this is an open-world game, you can spend some time driving around and taking in the sights. The problem is that San Alto lacks the landmarks, pedestrians, and other points of interest that might make you want to do so. All you have to look at is highway after tunnel after roundabout, resulting in a city that's boring and sterile. Emergency Heroes is perhaps a more shocking dystopian vision of the future than has been created by any number of science-fiction writers in the past. There are also bugs and design issues in abundance. Your car bounces over other vehicles, the GPS often points you in completely the wrong direction, and characters' heads pop up in the middle of the screen and block your view of the road, for no other reason than to offer up another line of meaningless dialogue.

Although the game itself is merely dull and repetitive, the overall presentation is on a whole different level of bad. The futuristic comic-book style is reminiscent of Crackdown on the Xbox 360, but it doesn't have that game's style or level of detail. The buildings all look the same, there are only a few different vehicle types, and the character designs look cheaper and more generic than the lowest-budget children's cartoon series. The music maintains a relentlessly fast tempo, but it fails to add drama to the monotonous pace of the game. Furthermore, the voice work teeters on the so-bad-it's-good level of amateurism. If you thought the House of the Dead series was laughably bad when it came to acting in video games, then Emergency Heroes makes that series look like a Royal Shakespeare Company production of Hamlet in comparison.

Though multiplayer modes help extend the longevity of the five-hour single-player game, they use the same mission types and are unsurprisingly as repetitive with friends as they are alone. The game supports two players via split-screen mode, and has seven multiplayer game modes in total once you've unlocked them by playing through the single-player game. These games aren't improved in any way by having another person involved, and there's no way to share your best times or play with other people online.

Emergency Heroes is a bad game. It's lazy, boring, and repetitive, and won't even appeal to the younger market that it's aimed at. The missions are dull, the driving is pedestrian, and the city is restrictive. Although it's not fundamentally broken, Emergency Heroes is devoid of any artistic merit and should be avoided at all costs. 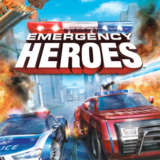