Both games are completely devoid of gameplay, fun, and flair. Worse, they are available free for the PC.

You'll find plenty of elves in Elf Bowling 1 & 2, but not much in the way of bowling. In fact, both of the games on this budget-priced Nintendo DS game card are so devoid of gameplay, fun, and flair that you'd be equally entertained by just tapping the stylus on the screen while the system is off.

Elf Bowling originally came to life as a freeware PC game back in 1999. It involves Santa, as the bowler, and his elves, who have been turned into bowling pins after complaining about working conditions at the North Pole. You have to try to knock down the elves, but the elves will do their best to distract you. Elf Bowling 2: Elves in Paradise came out the following year. It isn't a bowling game, but rather a shuffleboard game with the elves doubling as pucks.

Both games look similar to their PC counterparts, which isn't a surprise since there are literally hundreds of thousands of free Flash games out there with snazzier presentations and more-intricate designs. Each game has one flat 2D background. In Elf Bowling, the upper screen shows the elves in a close-up view, while the bottom screen displays the lane, Santa, and his trusty bowling ball. The ball moves down the lane with no animation whatsoever, but the elves in the upper screen are cutely drawn and sometimes do wacky things like flash their bare butts at Santa. There's slightly more animation in Elf Bowling 2, with Santa tugging on the elves' thong underpants to propel them spinning down the lane. Once in a while, the elves will bump into one another or fall off the edge of the boat and land with a surprised look in the mouth of a shark.

As for the audio, both games feature some elfish screams and naughty spoken-word comebacks along the lines of "Those all the balls you got, Santa?" Elf Bowling doesn't have any background music, but its sequel has a short mambo tune that plays before each bowling attempt.

Quizzically, although both games resemble the original PC versions, a number of animations and sound effects have been removed. In Elf Bowling, the ball no longer makes noise while rolling down the lane. In Elf Bowling 2, there's no longer a coin toss at the beginning, there are fewer elf animations, and the formerly smooth scaling effect now looks choppy and uneven. Those cutbacks are tough to stomach considering how minimalist the original games were.

The main failing of both games is that there just isn't much to do in either of them. In Elf Bowling, you launch the ball by tapping the screen or pushing the A button when the moving arrow is where you want it. Beyond that, there's no way to guide the path of the ball. You can't even specify how much power or curve to put into the roll. Elf Bowling 2 is slightly better, if only because you can adjust the aim and power of each shot by managing two separate indicators.

Ten frames in Elf Bowling take less than five minutes to complete. Once you've played through once, you've experienced everything the game has to offer. Elf Bowling 2 can be drawn out to about 10 minutes and is good for perhaps one or two replays, since it involves a CPU opponent and three full rounds of play.

There aren't any extras worth mentioning. Two players can compete against each another in Elf Bowling 2 by passing the system back and forth. Neither game keeps track of high scores or takes advantage of the system's wireless capabilities.

It's preposterous that a company would package together two free PC games on a DS card and try to sell them for 20 bucks, especially when the two games in question are as ridiculously austere as these. NStorm, the creator of the original Elf Bowling, did eventually manage to churn out a decent bowling game with Elf Bowling 3, and it's completely stupefying that Ignition Entertainment chose to put the first two games on this card instead of the superior third installment.

Elf Bowling 1 & 2 isn't a two-game set. It's a cruel holiday joke that preys on the ignorant and uninformed. 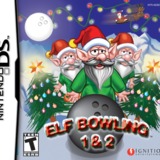 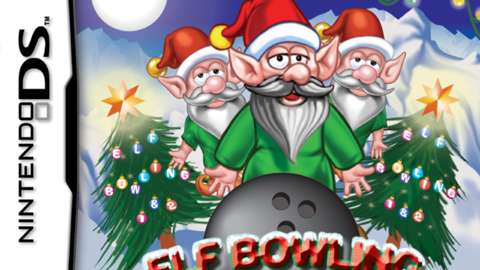 Based on the PC games of the same names, Elf Bowling 1 & 2 lets you play as Santa Claus as he tries to knock down his disgruntled elves in a bowling game.