Shooting bad guys and striving for high scores can be fun, but descending the same building over and over again gets old quick.

While it was groundbreaking for its time and is considered a classic arcade game, Elevator Action has always been one of those games that either hooks you or leaves you confused as to why anyone would waste more than a single quarter to play it. The game had you making your way to the bottom of a skyscraper while shooting and kicking gangsters in black suits. The mature premise and then-innovative gunplay enticed many people to slide a quarter into the arcade cabinet or to purchase a cartridge for play at home. Unfortunately, the honeymoon was short-lived for some players. The act of descending the same building over and over and repeatedly shooting the same bad guys could sap a person's attention span in about five minutes. Now that the NES version of Elevator Action is available for the Wii's Virtual Console, a whole new generation can experience this game that people either love or hate.

In the game, you play the part of a secret agent named Otto. Otto's job is to infiltrate a tall building from the roof and descend its 30 floors looking for documents located behind randomly placed red doors. The game gets its name from the many elevators you have to ride on as you make your way down to the ground floor. As you move from floor to floor, mobsters in black suits will appear out of ordinary doors and try to shoot you. You can duck under or jump over their shots, but the best way to deal with the bad guys is to shoot back or hit them in the face with Otto's feet as you jump toward them. You'll also quickly discover that you can crush the bad guys by luring them underneath elevators or shooting the light fixtures above their heads.

From its description, Elevator Action seems like a varied action romp with a James Bond flavor. In reality, there's not much to it. Riding elevators isn't very interesting, shooting the same bad guys gets old fast, and the puzzle aspect of having to navigate multiple elevators at the bottom of the building doesn't liven things up much. Each level is also basically the same. The background colors change and another red door is added to each subsequent level, but the building layout never changes. Furthermore, since the game was originally produced in 1983, the graphics and audio reflect that era. Everything is crisp and well defined, but the 2D characters are blocky and the animation is choppy. The sound effects, meanwhile, are rudimentary pings and crunching noises, and the music is an insidious ditty that loops every 10 seconds or so. Some people argue, however, that the game's shortcomings are really its strengths. The blocky visuals do have a certain charm, and dodging bullets and escaping the building in each level can be mesmerizing, in much the same way that Pac-Man is, if you're into racking up high scores.

As far as the emulation quality is concerned, the Wii emulates the NES version of Elevator Action perfectly. The graphics are clean, the audio seems right, and the Wii Remote is a good substitute for the rectangular NES controller. At first glance, the colors may appear to be drab or washed out, but that's actually how the NES version looks compared to the original arcade game. Most people prefer the NES port anyway, because the characters and bullets don't move at a snail's pace as they do in the arcade cabinet.

Considering how polarizing a piece of software Elevator Action was in its heyday, it stands to reason that the effect would be magnified by significant levels some 20-odd years later. It's only 500 Wii points ($5), but even that seems like a hefty price to pay for such an archaic game. 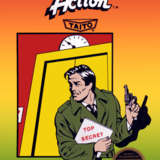