There's no denying that the space shooter isn't what it used to be. The once-thriving genre, championed by such classics as Gradius and Raiden, has boiled down to more of a nostalgic pastime. People just aren't as jazzed about blowing away hordes of alien space ships and racking up billions of points like before. While the occasional shooter still shows up every now and then, it seems like it'd take a miracle for a company to produce one that would rejuvenate the genre and renew public interest. Leave it to Squaresoft to accept the challenge. And while the fruit of its efforts may not be the miracle this genre needs for a complete revival, it's just about as good as shooters get.

Einhander isn't particularly long, but shooters almost never are. The half dozen or so stages are seamlessly interconnected and demand just over an hour to plow through in total. Each stage - in fact, each part of each stage - grows progressively more difficult, such that you'll constantly face new challenges in the form of smarter, meaner enemies and more of them. Likewise, the mid and end-level bosses will constantly keep you guessing, as they tend to be both unpredictable and versatile in their attack styles. Even shooter veterans will have their hands full with Einhander, though multiple difficulty settings make the game accessible and enjoyable even for those whose hand-eye coordination isn't what it used to be.

You star as an enigma who hails from the moon and swoops down upon Earth's powerful defenses, seeking to eliminate them single-handedly. You have a choice of three different superpowered spacecraft to fly, with two more hidden ships waiting to be discovered. Any of these handles beautifully, and you can adjust its velocity at a whim. All come standard with a typical peashooter that doesn't do much damage but gets the job done when you're dealing with lots of weak enemies. Some of the bigger flying vehicles and robots that'll come gunning for you will demand considerably more attention, but as reward for your effort, you can snatch their weapons from them as they convulse in explosive death throes. Over a dozen special weapons are available for your destructive whim. These include a vicious bullet-spewing Vulcan machine gun and its bigger, much nastier brother the Juno; the massive Cannon, capable of tearing through multiple opponents with a single slug; and the Wasp missile launcher that fires swarms of seeking rockets. Less typical weapons in the arsenal include the Blade, a short-range but powerful laser sword that can swirl around the hull of your ship to vaporize anything in your vicinity; and the Riot, a lightning gun that grows more powerful the longer you charge up its energy.

Each of these weapons can be swiveled between two positions, both having equivalent strategic importance. Further complicating the situation, these special weapons pack limited ammunition, meaning you need to make your shots count. Unfortunately, outside of all these great weapons, there are no power-ups or bonuses to be found anywhere. And you'll need all the help you can get out there, since one direct hit to your ship spells destruction and a trip back to the last continue point.

Finely tuned play mechanics aside, it must be said that a shooter doesn't add up to much if it doesn't look good. Ideally, you want to see as much detailed destruction crammed onto one screen as possible, without any irritating slowdown. Einhander delivers all that and more in full polygonal glory. The game flies by at a furious, consistently smooth frame rate, and everything onscreen down to the dinkiest enemy fighter is a carefully crafted polygon with moving parts, flickering lights, and plenty of style and attitude. Meanwhile, the background scenery is simply gorgeous. Countless levels of scrolling, complete with colored lighting and other impressive effects, make such settings as a futuristic downtown and a watery robotics facility really look alive. There's attention to detail all over the place, from undulating reflections in the water, to flickering neon signs advertising hi-tech nonsense. You'll fight any number of crafty enemy opponents along the way, and while the little guys explode in a blaze of glory, the bigger ones get shot apart piece by piece. But nothing compares to running into some of Einhander's boss robots for the first time. Your ship may look pretty slick, but it's nothing but a flea compared with the hulking, fully animated steel monstrosities you'll face at the middle and conclusion of each level in the game. These bad boys are as mean as they come and aim at you with blistering beam weapons, machine guns, and just about anything else you can think of. And should you defeat them, they really go out in style, with full-screen cataclysms, enough to make you avert your eyes.

Einhander sounds good, but not quite so striking as it looks. If anything, the musical score is a little subdued. Though the first stage opens with orchestral chords and an operatic soprano, all music thereafter is your typical rhythmic, ambient techno fare. It keeps the adrenaline going, but doesn't hold up too well in light of Einhander's graphics. Sound effects here are likewise in the typical shooter style, with high-pitched explosions piercing the soundtrack every inch of the way. Your ship's standard-issue gun sounds disappointingly '80s, though the special weapons you'll find along the way are appropriately deafening. Strangely (or perhaps predictably) enough, Einhander is also riddled with bits of German speech - usually shouted at you by the end-level bosses.

Though there are some hidden areas in the game, for the most part Einhander follows a set linear course. To help keep things fresh, you can look out for secret weapons and ships, and you can examine your performance once the dust has settled, with Einhander's keen player ranking system. The various difficulty settings and challenging bosses likewise lend Einhander much more play life than your typical shooter, and on top of all that, the game even sports a fascinating plot (fully revealed only in the last stages of the game). It's an excellent game that boasts all the assets that the best of its genre have to offer, as well as many of their inherent shortcomings. With that in mind, it probably won't make you a fan if you don't like this type of game in the first place. But rest assured, if you like shooters, you'll love Einhander. 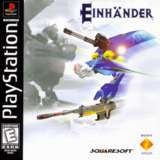 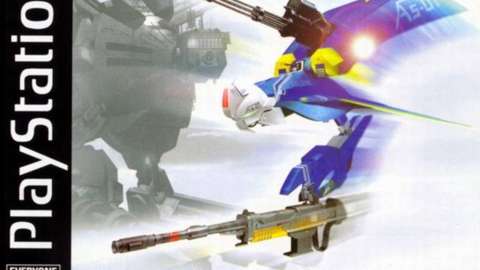