Though derivative, Egg Mania provides a perspective on the Tetris formula that's fresh enough and an adequate amount of gameplay variety to keep puzzle fans engaged.

It's often said in the medium of film that there are only a handful of stories to be told in all the history of humankind and that the same stories are being told over and over again. Something similar could be said about puzzle games, because it seems developers in the genre have been telling the story of Tetris, or some variant of it, over and over again. Such is the case with Egg Mania, known by its fans under the nickname Eggo Mania in regions not in the stranglehold of the Kellogg's corporation. Though derivative, Egg Mania provides a perspective on the Tetris formula that's fresh enough and an adequate amount of gameplay variety to keep puzzle fans engaged.

Egg Mania can be boiled down to two distinct gameplay types. The main mode plays like a combination of Namco's Mr. Driller and the classic Russian puzzler Tetris, only in reverse. The setup is familiar: You have an empty, rectangular game field, and random geometric shapes are floating down from above. You control a small egg-shaped man at the bottom of the field, and using this ovate avatar, you must actively grab the bricks in order to turn them and place them; unattended bricks will simply float past you to the water below. Your goal is to stack bricks and reach the top of the gameplay field before your computer-controlled opponent does. If you attempt to just stack the bricks in a narrow vertical pile, your tower will crumble, forcing you to fill in complete horizontal lines and creating an interesting speed-versus-strength dynamic within the game. Aside from bricks, power-ups and bonuses will occasionally float down from above. Bombs can be used to destroy pieces of your opponent's tower, lightning bolts and hammers will knock your opponent off his or her tower for a moment, the superboots will allow your egg to jump higher and move faster, and the trowel will fill in gaps on the top of your tower. These power-ups, coupled with the malicious monsters you'll occasionally encounter, give the game a healthy dose of chaos and increase the pace of the game.

The other main gameplay variant, called bomb, starts you and an opponent at the top of a gameplay field already filled solid with blocks. Then, as the name infers, bombs start raining down, and you'll lob them into your opponent's field in order to destroy your opponent's tower before your opponent destroys yours. This mode doesn't have quite the same depth or lasting appeal as the main Egg Mania mode, but it can still prove entertaining for short bursts. Aside from these two core modes, Egg Mania offers a bunch of other variants, including a solo mode, where you play against your own best score, and a tournament mode, which supports up to eight players for maximum multiplayer action. Though the computer will put up a fierce fight in the Egg Mania mode, the game proves much more entertaining in the context of a multiplayer game.

Save for Fantavision, Sony's trippy lightshow puzzle game, the puzzle genre isn't renowned for its high production values or stunning visuals. Egg Mania's sprite-based design has a simple and clean look to it that, while unimpressive, gets the job done. The game's lack of visual flair is made up for somewhat by its consistent and unique visual style. Though the cast includes an egg with an Afro, a punk-rock egg, and a deviled egg, at no point does the game feel like it's trying to be edgy and instead maintains a fun, lighthearted feel throughout. The musical backdrop reinforces this and is usually appropriate to the theme of the level, though it's not especially catchy. Also, the funky techno music that loops in between rounds becomes overly familiar after extended play.

Because of the game's relatively frugal production value and the less-than-appealing premise of playing the part of a brick-stacking egg, players not already steeped in the puzzle genre will probably have a hard time investing themselves in this particular game. But puzzle fans willing to look past its superficial shortcomings will find a fun, harmless diversion in Egg Mania. 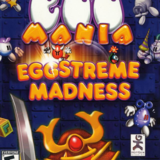