Paying attention to the lead-up to eFootball PES 2020's release has sometimes felt a bit like following football's real-life transfer market. Having lost the official license of current Champions League holders Liverpool, Konami responded by replacing the Liverpudlian club with their archrivals, Manchester United. PES 2020 even got a leg up on the powerhouse of FIFA by nabbing the exclusive license to Italian giants Juventus, forcing FIFA 20 to settle for a facsimile called Piemonte Calcio. And while the inelegant esports-flavoured name change might be bad, the scrappy underdog has been wheeling and dealing in an attempt to make PES 2020 a more attractive proposition for those beholden to the church of FIFA. It's commendable and clearly important, but PES should attract people because of its on-pitch excellence.

PES 2020 feels surprisingly different to last year's game once you emerge from the tunnel. The pace has been slowed down once again, delivering a realistic brand of football that's more methodical and less about ping-ponging the ball up the pitch in a matter of seconds. A palpable sense of weight to each and every player--not to mention the ball--can make the whole thing feel a tad sluggish at first, but it doesn't take long to adapt to this more considered style of play, and your input is as responsive as ever. Part of this is down to how smoothly the action flows. PES 2020 stitches each animation together with much more clarity than in previous years, effectively capturing natural movements that shift the simulation closer to reality. The new default camera angle helps with this, too, presenting the action at a slight curve that mimics what you see on TV every match day while giving you a broader view of the pitch.

This increased visibility is important because there's a greater emphasis on space and positioning in PES 2020. The pace of play might be slower than in previous entries, but that doesn't mean there aren't moments in almost every match where an explosive injection of speed is introduced. The blistering acceleration of the fastest players in the game is immediately discernible without it ever feeling like an overpowered and one-dimensional crux. This is due to the fact that these players need space in order to utilize their game-changing speed. Most matches in PES 2020 tend to be fairly tight affairs depending on the tactics deployed by both teams, but a goal can significantly alter the outlook of a match in a hurry. Suddenly, acres of space open up for one team to exploit as the other pushes forward looking for an equalizer. And it's on the counter-attack where fleet-footed players really shine, able to burst forward into open grass and cause havoc for defenders.

On the flip side, when there's limited space to work with player positioning comes to the forefront. The AI is intelligent enough to seek out pockets of space off the ball, and they'll helpfully offer an outlet pass if you ever find yourself wandering into a cul-de-sac. You'll also frequently see wide players such as Messi and Mbappe come deep to pick up possession of the ball, looking for a way to impact the match away from the isolation and tight coverage of the defense. Players will make smart runs in behind, too, though it's much harder to thread that inch-perfect pass behind the defense in PES 2020. You can still pull it off occasionally, especially if you have an adept playmaker on the ball and space to work with, but playing through ball after ball doesn't work with as much frequency as it has done in the past. This encourages a greater variety of goals, both by real players and the AI. You might see tidy one-touch passes splitting open a defense for a striker to wrap it up with an easy finish; a bullet header that's smashed in from a mouth-watering cross; or a 30-yard hit-and-hope that takes a wicked deflection off the back of a defender, rendering the goalkeeper helpless. Speaking of which, there's a lot more zip to long shots this year, making them a viable source of goals even if you might only score one in 15 attempts.

The long-overdue addition of context-sensitive kick accuracy factors into all of the above as well. Now, a player's posture, position on the pitch, and the amount of defensive pressure they're under will impact the accuracy of both passes and shots. If a defender can't get a clean foot on the ball when a player is barrelling through the box, their presence might still be enough to put off the opposing attacker and send his shot wayward. Once again, this margin for error amplifies the importance of spacing and your ability to gain a yard of separation for a clear-cut opportunity. Sometimes a player's first touch is enough to escape the clutches of an aggressive defender, with PES 2020's litany of new animations and techniques allowing players to exhibit more intelligence when interacting with an approaching ball.

This is another element that adds to the realism and inherent satisfaction of PES' football, providing you with an added degree of control that encompasses numerous variables such as the incoming ball's speed, the receiving player's body position, their skill level, and their playstyle. This aspect of PES 2020 grants certain players a sense of personality and individualism, with some utilizing recognizable skills and techniques to trap the ball. Along those same lines, AI teammates will even spread out to give skilled dribblers more room to work with, or make aggressive runs when a proficient passer has the ball at his feet. You'll only really notice some of this behavior with superstars like Ronaldo and Neymar, but there are other, smaller details that lend each player a tangible slice of humanity, too. For instance, the whole team has a tendency to remonstrate with the referee after the award of a free kick on the edge of their box, while a striker might wag his finger at the linesmen after a tight offside call. You may even notice the goalkeeper urging his defense to push up out of the corner of your eye, or see a defender crumple to the floor in pain after taking a shot to the midriff. Again, these are minute details, but they contribute to a sense of authenticity that elevates how enjoyable PES 2020 is to play.

The latter example is also part of PES 2020's improvements to defending and an increased physicality across the pitch. Players aren't afraid to put their bodies on the line, blocking shots and crosses with reckless abandon to prevent the opposition from scoring. Sometimes this can lead to moments like the aforementioned deflected goal, and the ensuing goalmouth scrambles after some fortuitously blocked shots are also fantastically chaotic. Ideally, you'll put a stop to most attacks before they reach this point, which is helped by defending being genuinely enjoyable this year. There's a real wince-inducing crunch to some fouls, and a plethora of new tackling and clearing animations gives you more ways to win the ball back. There are no force fields around attacking players either, but they can use their bodies to get between man and ball, with physically stronger players able to hold off defenders more effectively than most. Referees are still maddeningly inconsistent, however--much like in real life. They're too whistle-happy at times and waste no time digging into their pocket to book players for innocuous fouls. Other times they'll ignore blatant penalties for no earthly reason.

Fortunately, opposing team AI fares much better. The days of playing teams with a single-minded pursuit of drilling low crosses into the box are gone. There's a delightful variety of ways the AI will now approach each game, scoring all types of goals with a number of different tactics, whether they're bombarding you with long balls or passing between the lines. This makes the long-standing Master League mode a lot more enjoyable to play in PES 2020. The basic makeup of the mode hasn't really changed, but there are some new superficial additions. Instead of building a manager at the offset using a limited character creator, Master League now asks you to pick from numerous players and managers from the past and present of football, including Diego Maradona, Roberto Carlos, and the late Johan Cruyff. Throughout the season there are dynamic cutscenes that regularly present you with dialogue choices to help shape your manager's personality and allow you to set numerous objectives for your team. In truth, none of these scenes impact the game in any meaningful way. Your dialogue choices will affect how fans and the media perceive you, but this is entirely inconsequential.

A more significant change in Master League revolves around transfers and how they're not quite as ridiculous as in the past. You'll still see teams pay exorbitant amounts of money for players they don't particularly need, but at least the fees are somewhat in the realms of reality. It's highly unlikely a team will splash out on a 33-year-old, for example, but that won't stop PSG spending triple digits to sign Sadio Mane. Beyond this, however, Master League is still stuck in the same holding pattern it has been for a few years now. Taking the default group of mediocre players up through the leagues--and eventually falling in love with them--is still engaging, especially now that the AI is a lot more fun to play against. But Master League still feels like a case of been-here-done-that.

MyClub, the Ultimate Team-style fantasy team builder, is in a similar position, yet remains PES' best game mode. Constructing a team of legends and current players is still appealing, and the ability to play against the AI, other human players, and in co-op games gives you plenty of options to play PES however you prefer. Microtransactions are still present, but quickly assembling a competitive team doesn't rely on parting with real-world money unless you're impatient. PES 2020 also changes the way player ratings work, with every player you acquire starting with their default rating at a minimum. From there you can continue to upgrade them and exceed this rating or acquire special team-of-the-week players that are already rated higher, but you'll no longer have to worry about getting a lowly 82 rated Raheem Sterling that needs extra training.

The licensing issue revolving around PES will likely never going go away, and people are still going to download option files to get all of the official kits and badges anyway. Like its predecessors, eFootball PES 2020 continues to do its talking on the pitch, refining and improving on last year's game to present what might be the greatest football game ever made. Sure, it's disappointing that you still can't play as Borussia Dortmund and the majority of the Bundesliga and a few other leagues, and its single-player offering is almost identical to what was included three years ago. But all of this effortlessly drifts to the back of your mind once you step between those white lines and simply start playing the beautiful game. 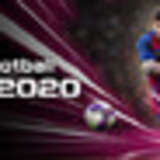 So far Richard has spent around 40 hours salivating over every slick passing move and gorgeous goal in PES 2020, with many more to come. Review code was provided by the publisher.