Take last year's WWF Attitude, strip out the WWF license, insert the ECW characters, and voila - a new game to release in 2000.

Game companies are known for taking last year's game engine, updating it with a few minor features, and releasing the end result as a new product. A fine example of this is Acclaim's ECW Hardcore Revolution for the Game Boy Color. Take last year's WWF Attitude, strip out the WWF license, insert the ECW characters, and voila - a new game to release in 2000.

To Acclaim's credit, ECW Hardcore Revolution's gameplay has been refined a little from the company's prior release - now, holds and take downs are even easier to pull off. In addition, Attitude's perpetual "behind-the-back grapple" situation is now a thing of the past. Honestly, there are no problems to be found with the gameplay. Kicks and backhands come out easily, movement is responsive, and going for the pin is as easy as tapping the A button. However, all of this was just as easy accomplish in last year's WWF Attitude.

The more sweeping changes to ECW Hardcore Revolution lie in the game modes. Gone are Attitude's king of the ring, tag team, and cage matches. In their place rests one new mode, a barbed-wire match. While it's gleefully fun to throw an opponent into a barbed-wire ring, the removal of tag and cage options is not something that can be overlooked. On a positive note, Acclaim did see fit to include the use of nonsanctioned ring objects, such as chairs and tables. However, while this option to use "illegal" objects is amusing, the subtraction of useful game modes detracts from the overall value of the product.

Just as with last year's product, ECW Hardcore Revolution continues the tradition of well-drawn, fluidly animated wrestlers. While some may scoff at how a few of the wrestlers resemble touched-up WWF stars, it's pretty clear that Crawfish set out to distance the character artwork in ECW from that of last year's game. Rings and arena designs are also similar to the previous effort, which is to say they look sufficient and don't detract from the gameplay.

Though the graphics may not detract, the game's sound sure does. The same single music track repeats over and over throughout, while two or three sound effects serve to convey the sound of every hit, grapple, toss, and move in the game. Few gamers are going to want to keep the volume turned up for this one.

Frankly, this game isn't much more than a rehashed WWF Attitude, just like its console brethren. While it may be the best wrestling game on the Game Boy Color, it's not a must-have. If you've already got Attitude, you pretty much own this game. If you don't own either, ECW Hardcore Revolution might be worth a look. 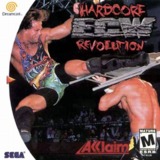