While Anarchy Rulz bears the ECW logo, the wrestling action is simply too low impact and refined for the likes of this brutal organization.

For the uninitiated, ECW stands for Extreme Championship Wrestling, a federation that prides itself on acrobatic wrestling and bloodcurdling danger. Unlike the tamer WWF and WCW leagues, ECW's claim to fame is a combination of dripping blood, backstabbing tactics, and high-risk maneuvers. With the move to national broadcasting via The Nashville Network, ECW's spotlight has never been brighter, and it is perhaps for this reason that Acclaim delivers its best rendition of the ECW franchise yet, ECW Anarchy Rulz. Well, sort of, anyway.

ECW Anarchy Rulz's main highlight is its feature list - a list that is so long it would take two full pages just to go into all of the many modes, options, settings, and features this game has. There are 34 wrestlers to choose from, ranging from the likes of Tommy Dreamer and Justin Credible to the charismatic stylings of Francine and Super Crazy. Should these stock personas prove inadequate, an outlandishly diverse create-a-player mode exists to further satiate your machinations. Skin color, eye color, body type, facial features, hairstyles, clothing types, logos, and personality are just some of the many features you can vary in this mode. The game lets you assign various moves to your wrestler, and it allows you to design your own moves as well. In addition to this, a stable (think horses) editing feature allows you to create your own bonded cadre of four wrestlers, replete with theme songs, logos, and personality differences.

As far as modes go, the game offers exhibition, career, and tournament modes. Within each of these, there are many, many, many additional options. In exhibition, you can choose from 12 different match types, such as versus, tag team, brimstone, and battle royal, all of which may be completed in single-elimination or non-elimination styles. You can also alter the match type, length, win style, and arena design. Career mode, on the other hand, is for those who want to progress in a month-by-month route to the top. You'll participate in a series of location, televised, and pay-per-view matches, winning or losing until the season ends or you manage to come away with a belt. Tournament mode then combines the two, giving you a ton of options to play with but limiting the type of kudos you can earn. Combine all of the above with support for four players, a pay-per-view editor, and hilarious commentary by Joey Styles and Joel Gertner, and you've got a game with an A-list of features.

Unfortunately, all good things must come to an end, and, in the case of ECW Anarchy Rulz, this happens when the match begins. The wrestlers are all highly detailed and colorful, but they still resemble the same overly simplistic character models that Acclaim has used in all three of its previous wrestling titles. Arena detail has been improved over the prior ECW in that logo shirts, fan signs, and flying objects are more colorful and visible than before, but everything outside the ring is still both blocky and blurry. Inside the ring, however, the mat, turnbuckles, posts, ropes, and wrestlers within all flow with 32-bit polygonal goodness, but this facet is marred by a camera that flutters and bounces about, almost as if it is intentionally trying to induce nausea. The blood splotches, bruises, and injury visuals that appear during matches are a nice touch, though. Still, the game loses several points for a lack of originality, a choppy camera, and an ugly crowd.

Even if you don't mind unoriginal visuals, no amount of acceptance can save this game when it comes to what matters most, the gameplay. Acclaim added table, barbed wire, and brimstone matches, and even went so far as to improve the CPU AI, but it didn't bother to change the moves, the moves system, or the overall feel of the game a single iota over any of its prior wrestling titles. While Anarchy Rulz bears the ECW logo, the wrestling action is simply too low impact and refined for the likes of this brutal organization. For some unknown reason, the game puts an emphasis on grapples and throws, rather than high-risk leaps, takedowns, and cheating. Smart designers would have made their game representative of ECW by emphasizing this latter set of skills. Acclaim instead went with the former, wrapping the ECW franchise around a distinctly WWF personality. Things just don't feel quite right, and, even if you like the controls, the AI still cheats too much, the same boring combinations still lead to wins, and crowd involvement still takes precedence over inherent skill. Put simply, only staunch ECW fanatics or wrestling neophytes will want to play this game for any length of time. 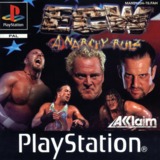