The main evil character in the game is extremely creepy looking - unfortunately, so is everybody else.

What would you do if you learned that your father was not just an average Joe, but instead he was a relentless sleuth hot on the trail of a demonic murderer? That's the premise of Echo Night, a first-person puzzle-solving adventure that puts you into the middle of a time-traveling quest to find out what has happened to your father.

Your life is turned upside down with the delivery of the mail. You receive a letter from your missing dad that contains a key to unlock a time-traveling adventure. With the aid of time-warping books and paintings, you learn that your father is chasing a sadistic murderer possessed by a demonic red knife. Your task is to aid your pop's quest while releasing the trapped souls of people murdered by the evil man's evil knife. To do this, you'll hop about to various locations at different points in time, all intertwined with your father's manhunt. You'll solve puzzles and appease souls with items you picked up along the way. Once you've completed the game, the nonlinear storyline will make sense, and you'll able to reconstruct the proper plot from the shuffled scenes you've seen.

The main evil character in the game is extremely creepy looking - unfortunately, so is everybody else. All the characters you encounter suffer from a polygon deficiency - they all have pointy chins or blocky faces. What's even worse is that most of the characters also suffer from a lack of textures. Conveniently, most of the game's NPCs are spirits, which appear in the form of wireframes with light gray textures. This makes almost every ghost uninteresting and doesn't help motivate you to free the spirit. The backgrounds all retain the proper style for the time period you happen to be in and are delightfully mediocre. Not much can be said about the sound except that there's very little of it. You spend most of the game in musical silence until something disturbing happens. The sound effects are all very drab and unappealing.

Still, the most frustrating aspect of this game is the game engine. Even with the speed turned up all the way your movements still seem too sluggish, and waiting for the cutscenes attached to every warping sequence becomes irritating rather quickly. Almost as annoying is the maddening use of time warping - it would appear that cabinets, paintings, dolls, and clocks are all capable of transporting you to different time periods. Although this is mainly a puzzle-solving mystery, your character can still take damage. It's not uncommon to run into a few different evil spirits. Unfortunately, there are no cool weapons for you to use; instead, you'll dispose of evil spirits with a light switch. Flipping on the lights isn't what I'd consider an adventure.

At Echo Night's heart there are some great puzzles. Unfortunately, they're few and far between, and most of the game revolves around sticking the object you had found two rooms earlier into something in the room you're currently in. The plot becomes too muddled, and it's easy to mistake one bland spirit for another. The game is also extremely short - about six to eight hours for the average player, and the offer of multiple endings isn't really compelling enough for you to want to put up with the game's flaws all over again. The only thing this game does exceedingly well is give you an excellent example of how not to do a first-person puzzle-solving game. 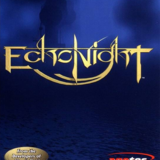