Ecco the Dolphin: Defender of the Future Review

Ecco holds up the standards of creative execution that Sega has set for its flagship titles and simultaneously makes clearer the potential for artistry in video games.

Sega's reputation as a risktaker is well deserved. The company consistently releases new hardware months before the competition. It tests market waters with new and often unproven add-on technology. And most importantly, Sega is continually expanding the boundaries of our popular conception of "video games." The last year alone has seen such departures from the gaming norm as Space Channel 5, Samba de Amigo, and Seaman. Alongside gameplay, Sega's headliners often emphasize less tangible qualities like style and strong aesthetics. Such is the case with Ecco the Dolphin: Defender of the Future, the Dreamcast continuation of a 16-bit series that never quite fit in with other games.

Ecco the Dolphin casts you as its namesake, a playful, carefree dolphin with a smattering of stars across his nose. Ecco isn't an ordinary aquatic mammal, though; he lives in a world where dolphins are protectors of the earth and spreaders of good will to other forms of life. The game portrays dolphins as divine creatures, wholly in tune with the workings of the natural world. When an alien force known only as the Foe threatens that order, it falls to Ecco and his comrades to fight against that menace. A Foe attack shatters the dolphins' crystalline guardian, and its pieces are scattered across the ocean floor, waiting to assist Ecco in his journey. And so the game begins...

In gameplay terms, Ecco on Dreamcast is Ecco on Genesis with the third dimension added. As always, Ecco can still swim forward slowly or dart around. He can use his innate sonar abilities to communicate with friends and sing the songs of the sea. Leaping from the water into the bright sunshine allows him to draw air, and in the process, he can do some impressive aerial tricks. Thanks to the dolphins' guardian, a variety of special powers can enhance Ecco's attributes, such as his speed, sonar, and ability to hold his breath. Ecco will encounter opposition on his quest, including sea creatures and disagreeable terrain, and more often than not, you'll need to find creative, nonviolent solutions to these problems. Interaction with the environment is not only possible, it's entirely necessary.

The environment that Ecco roams is incredible. Let's dispense with the pleasantries: Defender of the Future is one of the most beautiful games ever. Playing Ecco is like transforming your television screen into a porthole on the side of the Nautilus. The underwater environs and life depicted are as realistic as one could imagine the Dreamcast hardware is capable of rendering. Ecco's graphics range from the overtly impressive, such as a humpback whale and her calf floating lazily in the current, to the subtle and nuanced, like tiny translucent fish floating in a darkened undersea gorge. Swim down to the ocean floor, and you'll see refracted light playing off the stones. Follow a school of bioluminescent fish into a cave, and they'll softly light your way. Countless delicate touches converge to make Ecco a visual feast of aquatic splendor that's unmatched in gaming.

The game's animations are as beautiful as the graphics. Sea turtles swim along in a group, and Ecco leaps from the surface of the water to do a backflip, and it all truly seems like poetry in motion. Watching Ecco gives one the impression that Appaloosa observed real wildlife before animating its digital denizens of the deep. These visuals and the game's slow, subliminally soothing music add up to one of the most relaxing game experiences around; this reviewer found himself getting sleepy after one extended playing session.

Ecco is impressive, but not without its flaws. Impatient gamers will notice right away that the game unfolds very, very slowly. The first level actually gives you no objective or direction at the outset; you're left to swim around for several minutes before any indication of purpose is made. Even after a level's tasks are delineated, it can often be confusing or overly difficult to actually complete them. The game also suffers from an unfortunate amount of slowdown that occurs more often than is really acceptable. Finally, a few minor control issues exist, mainly when navigating tight spaces.

Ecco the Dolphin isn't for everyone. If you like to boot up a game for an action-packed twenty minutes at a time, look elsewhere. However, those that enjoy a slowly paced game experience will find it enjoyable. The game contains sufficient depth and length to give patient players a satisfying and rewarding experience. Some of Dreamcast's recent titles, such as Seaman and Space Channel 5, have been idiosyncratic in their own way, and Defender of the Future helps to further this trend. In the end, Ecco holds up the standards of creative execution that Sega has set for its flagship titles and simultaneously makes clearer the potential for artistry in video games. 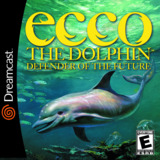