Ecco Jr. is a simplified, unchallenging dolphin romp aimed at the little ones.

To put it mildly, Ecco Jr. lacks the challenge and purpose found in the previous Ecco the Dolphin games. Rather than fix the aimless mazes or collision problems people experienced in the first two games, the developers instead chose to strip away the hazards and breath meter entirely, gearing the third game toward the littlest of little ones.

Ecco Jr. is a 2D underwater adventure that puts players in control of a young bottlenose dolphin or an Orca whale. On the normal setting, there are 18 missions to complete. The hard setting doesn't make things more difficult, it simply adds nine more missions to the mix. For each of those missions, you have to navigate underwater caverns and perform various collect-a-thon tasks, such as gathering pieces of treasure or bringing a baby turtle back to its mother. The controls are easy to master because you only have to worry about using the D pad to swim, one button to kick in a burst of speed, and the other button to fire a sonar beacon that helps Ecco latch onto items. Enemies can't hurt you in Ecco Jr., so there was no reason to include the ramming attack and killer sonar from the previous games.

Indeed, Ecco Jr. is the Ecco the Dolphin experience whittled down to its bare essentials. The levels are small, which means you'll rarely feel lost, and gathering the items you need to unlock each key glyph only takes a minute or two. You don't have to worry about running out of health or breath. Sharks, jellyfish, and other nasties from the previous games are merely window decorations. About the only time you'll feel any challenge at all is during the tag missions, which involve tagging another dolphin and rushing to the exit before it tags you back. There's no story. In fact, there's no text dialogue whatsoever to "slow things down." From start to finish, Ecco Jr. takes roughly an hour to complete.

Most people would find the combination of tiny levels, repetitive tasks, and invulnerability a recipe for boredom, but those concessions probably won't bother a little one who's handed the controller then told that he or she gets to be a dolphin. That's the one aspect, at least, that Ecco Jr. has in common with the other games in the series. It's still sweet to watch Ecco swim through underwater locations and break up schools of tropical fish. It's also still very fun to leap out of the water at full speed just to watch Ecco make a big splash on reentry.

Video games, just like movies, are made for various audiences. For the bulk of the gaming audience, Ecco Jr. is hardly a game and barely worth the cost of the 800 Wii points ($8) to download. However, if you have young children lurking nearby, there's a good chance they'll be captivated by Ecco's antics long enough to justify the cost and to pick up some of the basic skills that will serve them well as they join the next generation of game players. 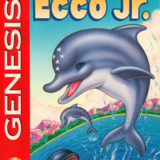