Laying waste to cities is fun, but frustrating objectives and stiff difficulty prevent Eat Them from being a monstrously good time.

Whether built piece by piece in a mad scientist's lab, awoken from a long slumber by nuclear blasts, or invading from another world, giant monsters have been a cinema staple for generations. Starting with Rampage in the mid-'80s, games have sometimes strove to put players inside the massive skins (or rubber suits) of these tremendous terrors to experience the destructive thrill of laying waste to cities with their own bare claws. Eat Them is the latest game to try to make you feel like one of these massive monsters, and there is satisfaction to be found in wielding the power to destroy buildings with all the effort it might take a child to destroy a sandcastle. But this simple pleasure soon gives way to frustration as you're forced to complete objectives that distract from the joys of destruction. Furthermore, the efforts of puny humans trying to put an end to you become so effective as to make your monster seem like a fragile creature rather than a powerful monstrosity.

There's the slightest hint of a story about a mad scientist using his monstrous creations to do things like rob banks and build up an army of henchmen, but the game wastes very little time on it, which is just as well. No giant monster ever stopped to ask itself, "What's my motivation?" Eat Them gives you an isometric view of your giant monster and its immediate surroundings, and it sets you loose in an enclosed urban environment where you're free to run, jump, punch, kick, and stomp with abandon. Like so many games of late, Eat Them's visuals take inspiration from comics, and the vibrant colors and sharp, clean lines give the action a pulpy comic book vibe. The buildings, parks, and walkways are bright and enticing, which makes destroying them all the more enjoyable, and it's empowering to see the effects of all your rampaging. Fragments of buildings fly from your attacks like so many little pieces of cardboard, and the interiors of structures erupt in flames.

The controls feel appropriately lumbering and imprecise; your monster indiscriminately and gracelessly punches buildings and stomps down city streets without regard for the trees or small structures in its path. But as much as this lack of precision feels right given the size of the monster you're controlling, it sometimes gets in the way of gameplay. You might want to pick up that police car and hurl it at the nearest building, for instance, but your monster may grab a nearby person instead. This imprecision can become a serious issue when you're on the brink of death and need to pick up a cluster of pedestrians to replenish your health but can't quite make your monster grab them.

Once you do have a person or five in your scaly handlike appendage, your monster automatically stuffs those tasty humans into its maw and reaps the nutritional benefits. Replenishing health is a constant concern in Eat Them. Massive monsters have metabolisms like you wouldn't believe, and as a result, your creature's health steadily declines, even in those rare moments when it's not being assaulted by people. Of course, the city's inhabitants don't take kindly to your visit to their home. Crushing city blocks into smithereens would be less satisfying without also being able to crush some puny humans making laughable efforts to stop you. And it is enjoyable to grab the occasional mouthful of delicious police officers or soldiers and chomp down on them. But the efforts of these humans soon start to seriously cramp your style. As you reduce more and more of the city to rubble, the humans bring out soldiers with rocket launchers, tanks, mechanized battle suits, and other weaponry capable of taking down a towering monster. These amassed fighting forces can drain away your health so rapidly that you need to focus your efforts on eating people almost constantly just to stay alive, leaving little time for the more enjoyable business of destroying things.

The Maximum Destruction levels are the best, setting you free in the city with nothing to do but level as much of it as you can within a given amount of time. Destruction levels differ in that they require you to destroy specific targets before time runs out. Sadly, many levels require you to focus on doing something other than smashing stuff to bits. Race missions have you run from checkpoint to checkpoint and flip the core mechanic around by requiring you to keep the damage you leave in your wake below a certain amount. It's an interesting attempt to turn the way you play the game upside down, but this task turns out to be more frustrating than enjoyable. Waypoints hover around the very edge of the screen to guide you to the next checkpoint, but it's easy to lose sight of these small indicators amidst the chaos. There's some fun to be had in leaping onto rooftops and hustling down the streets, but it's impossible to avoid leaving a fair amount of damage in your wake as you try not to needlessly step on fragile buildings or cause other wanton destruction, so you're sure to earn the attention of the armed forces. The attacks of humans can start to feel unfair here because you don't have the option of stopping much to fight them off if you want to earn a gold medal, but at a certain point, you can't just ignore them, either.

In each of these level types, you have unlimited monsters, but losing a monster incurs a significant time penalty. The Survival levels are the exception. Here, your goal is simply to keep a single monster alive for as long as possible. It's easy--and dull--to survive for long stretches of time by lurking in a corner of the playing field and just running to the next empty corner when the armed forces start bearing down on your location. You also need to complete the occasional story mission, each of which has a specific objective, though most of these end up feeling pretty similar. For instance, in one, you need to smash a prison and then make sure the escaping prisoners are not captured by the police; in another, you need to make sure that the members of a protesting pro-monster-rights group aren't arrested.

Protecting these escaped criminals and monster-loving protesters is irritating because the controls don't let you precisely target any police or soldiers who impede them. In later story stages, the armed forces come at you with such force that escorting your flock to safety before time runs out becomes maddeningly difficult. And because you need to complete each mission in one group before you can move on to the next, you can't just avoid the types of missions that aren't to your liking. You may well find yourself stuck, needing to repeat one mission over and over again until you finally manage to pass it and can advance through the story or until you just give up in frustration.

There are four premade monsters to choose from, but you can also mix and match heads, arms, bodies, legs and backpacks that can fire mortar, rockets, or other tools of destruction to devise your own horrific creation. You unlock new parts for earning silver or gold medals on missions, and gaining access to gruesome new insect heads, deadly mechanical claw arms, and bizarre three-legged lower bodies is a cool reward for your destructive efforts. There's local multiplayer that lets up to four monsters team up to lay waste to the city or tackle other missions, and the simple pleasures of destruction are every bit as enjoyable when shared with friends. Nevertheless, you still need to contend with the same frustrating objectives and stiff difficulty issues you encounter when playing alone. Eat Them offers moments of destructive glee, but too often, it just doesn't put its best tentacle forward. 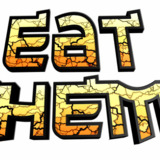