It's a video game, it's a cartoon, it's a toy, it's a lunch box, and now it's a PC CD-ROM game. In under two years Earthworm Jim has made the evolutionary circle complete by returning to its roots, the computer, where Shiny entertainment first breathed (programming) life into this lovable, sardonic, super-powered nematode for their cartridge game. Now Activision has brought that same fast-paced, side-scrolling action game to the PC with more levels, more weapons, and a chance to trick-out your work area with a Jim desktop theme that plugs into Microsoft Plus! for Windows 95.

Like The Simpsons, this animated character traverses the terrain between slapstick humor and social commentary—you could even call it subversive. With the same mastery that ported Pitfall: The Mayan Adventure from a cartridge game to a PC game, Activision has done justice to Jim with a righteous conversion.

The keyboard serves as a decent controller for this side-scrolling game, but to skillfully dodge and shoot the biggest bosses you'll want to play this one with a gamepad. The game is Windows 95 native, so it integrates smoothly into your desktop and there's no installation. Now all Activision has to do is convert the rest of my favorite SNES and Genesis games to PC, and I'll be completely content. 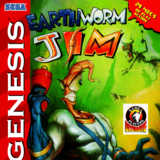