The tragic thing is that, despite the excellent control, the camera seems to be on a kamikaze mission to destroy the game.

Groov-y! That's what Vis Interactive and Rockstar Games would have you believe about their newest (and much delayed) title, Earthworm Jim 3D. With development having originally started not long after the last EWJ (for Saturn) was released, it seems like eons since the game was first announced. When it was first announced that the slippery, super-suited earthworm would be making his first 3D appearance on the N64, it seemed as if this would be a title to watch for. Well, time has passed, hardware sophistication has increased, and popular gaming styles have evolved. What Earthworm Jim 3D is, is an old-school platformer, released into the modern age. How does it stack up to the likes of Mario 64, Sonic Adventure, and the multitudes of Crash games? Pretty well.

For such an unpretentious game, EWJ3D plays almost exactly like the original 2D iterations did, only this time, in a 3D world. The same "wacky" humor is implemented (apparently, cows still constitute wackiness) in all forms throughout the game, starting with the premise itself. Apparently, Jim is minding his own wormy business, when a cow comes flying out of nowhere and lands on the unsuspecting dirt eater. It seems even worms can go into comas, because that's exactly what Jimbo does. The basis of the game is to send Jim through his own brain with the goal of finding his own marbles. Once you've accepted your predicament, it's off you go.

The controls in EWJ3D are easy enough to handle, with the jump, duck, head-whip and gun buttons all logically spread out across the N64's controller. Throughout the game, you'll encounter a familiar breed of enemies, although what they're doing in Jim's head goes unexplained. There are plenty of puzzles to solve, along with numerous items to find 'n' keep. It's the usual platform fare, for sure, but Vis manages to keep things interesting by not only staying true to the traditional EWJ playbook (whack the soda machine for funky gun power-ups), but by offering tight control.

The tragic thing is that, despite the excellent control, the camera seems to be on a kamikaze mission to destroy the game. At almost every turn, there is a crazy wall or some inconvenient camera angle trying to sabotage your progress. It is almost for this reason alone that EWJ3D becomes, at times, unplayable. Of course, there is the old "hold the R-button down to keep the camera right behind you" scheme, but it doesn't really work that well. In fact, it doesn't work well at all. Attempting to keep your mind off the frustrating camera is a goofy soundtrack that makes you wish the game weren't cartridge-based. All the story elements and "cinematics" are delivered via still screens, loaded with text.

Graphically, EWJ3D is an unassuming, unpretentious visual effort. There is no getting around the fact that this is another one of those soft-looking, brightly colored N64 games with mip-mapped, anti-aliased textures. Basically, this game looks as though it were rendered in soft pastels. Not that that's bad, mind you, but it's inherently N64-ish, nevertheless. Earthworm Jim and his opponents are all animated nicely, and they take advantage of some nice light-sourcing effects. Even the little details like the way Jim fires his gun are directly reminiscent of the 16-bit days.

If you can handle the outdated trappings in this most obvious example of a cartridge-based game, and if you were a fan of Earthworm Jim when the folks over at Shiny first unleashed him on the world, then you might enjoy this game. It is, after all, a solid game, with excellent control and adequate graphics. The main thing to consider is that damn camera. A little more tweaking to this bothersome element would have made all the difference in the world. Rent before you buy. 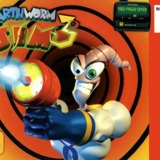