This port has a host of new problems that render the game virtually unplayable.

Originally released toward the tail end of the 16-bit era on the SNES and Genesis, Earthworm Jim 2 defied the conventions of what gamers had come to expect from a 2D platformer. Featuring a memorable yet unlikely hero, outlandish humor, and surreal level design, it was an unusual game to say the very least. Close to seven years later, Majesco Games has brought Earthworm Jim 2 to the Game Boy Advance. Unfortunately, this port has a host of new problems that render the game virtually unplayable.

While Majesco's first attempt at bringing Earthworm Jim to the Game Boy Advance looked, played, and sounded much like the original, this game is a completely different story. To put it bluntly, you'll get the distinct impression that just about every chance to cut corners was taken in porting Earthworm Jim 2 to the GBA. The graphics barely resemble what the game used to look like, to the point where the entire game looks like a mess of badly drawn sprites. Those same sprites also seem to be missing many key frames of animation, making the game look even worse in motion. The audio seems to be the part of the game that was least affected by the move to the GBA, although the music and sampled voices aren't very distinctive. One has to wonder what exactly went wrong this time around, especially since the previous Earthworm Jim game on the GBA was just fine.

Adding insult to injury is the bug-ridden password feature this game offers. Some passwords the game provides after finishing levels simply won't work when typed in. Others will start you off on the intended level, only to kill your character right away, not even giving you the chance to play. To call this an oversight would be a huge understatement--it's a glaring problem that should have been fixed before the game shipped.

In short, this game is a mess that should be avoided at all costs. It plays poorly and looks even worse. While the game was fun when it first came out, this attempt to bring an old license back to life leaves a black mark on an otherwise decent series. If you have any interest in Earthworm Jim 2 at all, you'd probably be better off dusting off your old 16-bit console and picking up a used copy of the SNES or Genesis version somewhere. 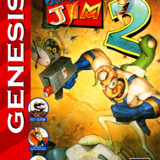