Eagle One does have its problems, but in the end, it's not a total loss.

Eagle One: Harrier Attack tells a grim tale: A group of terrorists, armed with remnants of Soviet military technology, have launched an attack on US soil. With Hawaii as its launch point, the so-called Army of the New Millennium (ANM, for short) intends to accomplish nothing short of "freeing the world from the grasp of the American war machine." A lofty goal, to be sure, and one definitely not beyond the group's means: To facilitate its acquisition of the islands, ANM has employed an electromagnetic pulse (EMP) weapon. An EMP of sufficient power is capable of rendering any electrical device - from microwaves to computer networks - totally and completely useless. A scary thought, no doubt, but one that is eerily possible. At any rate, ANM used an EMP to effectively paralyze civilization on the islands of Hawaii, and, wasting no time, moved on in with an ex-Soviet aircraft carrier, making its intentions of world domination (liberation?) crystal clear.

You, in the shoes of a crack US Marine pilot, are to put an end to this madness. Initially equipped with a drool-demanding Harrier Jumpjet, you must wade your way through 25 levels of not-so-typical flight-sim fare in order to vanquish the brutal ANM and reclaim Hawaii for good 'ole Uncle Sam.

To quote the instruction manual, Eagle One has "four modes of play: a one-player mode, two two-player modes, and a training-mode." The single-player mode runs you through the 25 missions, which are equally and cleverly dispersed through Hawaii's five islands. Your actual base of operations changes every five levels, which makes for some decent scenic variety. The two-player modes consist of a straight-up dogfight mode and a couple of co-op levels, which could actually have been kind of cool, if not for the game's mechanical problems. The training-mode schools you in the subtle art of Harrier-piloting, and it comes complete with the requisite foul-mouthed, hard-assed drill sergeant voice-work. Taking place in the Navy Flight School, this feature is not to be missed, as making the Harrier play nice requires quite a bit of getting used to, mostly due to a nonintuitive control scheme.

The 25 missions are freshly varied. Indeed, Glass Ghost has done digital justice to myriad capabilities of the Harrier Jumpjet. Instead of throwing you high up into the wild blue, Eagle One keeps most of the action down low, with the Harrier usually flying at altitudes under 100 feet. What's there to do down that low? Many things: bombard enemy convoys, rescue downed pilots, and take out panicked, infected terrorists before they can reach and contaminate the civilian population, among other things. All the while, of course, you'll be exchanging shells with enemies on all points of the axis, from refurbished Migs, to platoon upon platoon of tanks. All this sounds like great fun, doubtlessly, and it totally would have been, if not for the game's few (but serious) problems.First off, the control scheme will have one's fingers in knots. As the Harrier (the plane you'll use, primarily) has two flight modes - "jet" and "hover." The control scheme alters slightly for each. Applying the throttle in jet mode causes the Harrier to accelerate, while in hover mode, it'll cause it to gain altitude. Same principle applies to releasing throttle - slowdown in jet-mode, drop altitude in hover. With no dedicated means of accelerating while in hover mode, you're left to weakly squirm around in the air, moving at a pace resembling that of a ten-ton kite. And since many missions require you to precisely maneuver around in low altitudes (something extremely difficult to do in jet mode), this is, needless to say, extremely frustrating. While considering the physics and actual nature of the Harrier Jumpjet may actually justify this, Glass Ghost should have taken some liberties with reality to produce a more playable game.

Another cause for grief is Eagle One's graphics. While they do excel in many areas, certain elements on the ground are just way too indistinct to be able to target effectively. Often times, the only thing signaling a potential target will be a green ring surrounding it, issuing from the HUD. Convoys of trucks, and platoons of tanks look like armies of mottled ants. This would be understandable, if the objects were being viewed from a vantage of several hundred feet, but often times, you've only got dozens of feet on the blotchy, barely visible messes you're made to target. When it comes to the environment, depth and distance are well simulated, which makes for some nicely detailed environments, but in the end it all goes down the tubes when combined with the halfhearted effort put forth in creating the very things that inhabit the world.

Soundwise, Eagle One does an average job. But the premission productions, which were made to simulate a series of cut-and-pasted news broadcasts telling the eerie tale of EMPs and ANM, should be noticed, as they are possessed by a particular narrative polish, which the disciplined, sparing use of audio only helps. Aside from this, however, you can expect to hear the typical commander-to-pilot banter, engine noise, and the sounds of things blowing up.

Eagle One does have its problems, but in the end, it's not a total loss. One can definitely find some kind of strange solace in its grim, portentous story, and the decent variety of missions. Also, there are a couple of other aircraft that take secondary roles in the game, including an F-15 fighter jet, an A-10 rescue chopper, and a special, secret craft, so you can expect some kind of respite from the down-low type of combat. If you don't mind putting up with an initially clunky control scheme, and you aren't above dealing with decidedly subpar graphics, then you just might find some fresh flight-sim gameplay in Eagle One: Harrier Attack. 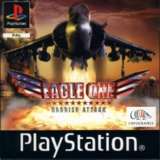 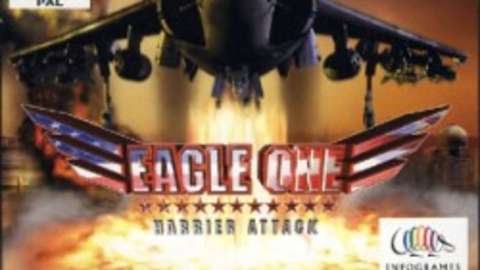 Eagle One does have its problems, but in the end, it's not a total loss.