You get exactly what the title promises in EA Sports Active: More Workouts. The first of what will likely be many sequels to the hit workout series for the Nintendo Wii builds on the routines included in the original game, moving into new areas that emphasize stretching and working on your abdominal muscles. The formula followed here is pretty much the same as that seen in its predecessor just a few months ago, although many exercises have been modified and new features have been incorporated. These include warming up and cooling down, which provide a more rounded and realistic gym experience. You probably won't want to turn in your fitness club membership just yet, but you still get a great workout here.

If you broke a sweat in the first EA Sports Active, you will find yourself in familiar territory here. More Workouts is pretty much a carbon copy of its predecessor. You still pull a leg strap onto your right thigh and use stretchy resistance bands. You also use the Wii Remote with the nunchuk to mimic lifting weights, doing lunges, punching targets, running laps, and so forth--all to the sadistic accompaniment of an onscreen personal trainer who makes all this stuff look awfully easy. There generally isn't more than a moment's setup to each exercise, whether you're boxing or waterskiing. A brief video introducing every routine tells you what needs to be done to prepare, which generally involves simple steps like tucking the nunchuk into the leg-strap pouch or getting the resistance bands into position to do some curls. Workouts still range from relaxed to damn-near ruthless, letting you pick an intensity that is perfect for your current level of fitness. This sort of game might seem gimmicky, but don't kid yourself--you can get a serious workout here. If you follow the directions and stick to the program, you can't help but drop pounds.

So, everything is mostly where you left it. Just a handful of adjustments have been made. The most obvious is the change of scenery. Perhaps in a nod to Nintendo's Wii Sports Resort, all your working out now takes place on and around the beaches of a tropical paradise. So you get to take in some beautiful--if pixelated--scenery whenever you don't have sweat dripping into your eyes. The 30-Day Challenge program from the first game that scheduled workout plans and tracked burned calories, as well as food consumption, over a month has been replaced with a new 6-Week Challenge. This isn't exactly a stop-the-presses transformation, although you have to assume that taking the fitness plan beyond a month only increases the odds that exercise will become a permanent lifestyle choice. Still, having just a single long-term program remains somewhat limited. More choices would be welcome, perhaps in the form of week-long intensive training options or full-year plans for those into a serious long haul. And a whole-body health approach is emphasized with the inclusion of a slimmed-down copy of Bob Greene's Best Life Diet book. He's best known to TV viewers as Oprah's trainer--which might actually be a blow to his credibility given the ballooning size of the talk-show icon in recent years--but the book is more than a cheap throw-in thanks to inspirational fitness advice and a ton of tasty recipes. All in all, this is an impressive package for $40, although it should be noted that the large-box game doesn't include the leg strap and resistance bands. So tack on another $20 or so if you don't already have them.

Exercises have been mixed up as well. There are now set periods to warm up and cool down before and after exercising. This was a big omission from the first game and a potentially harmful one because the exercises were rigorous enough to hurt any unwitting couch potato who rushed into them without limbering up first. One problem here, though, is that the warm-up and cooldown never varies. You're always doing the exact same hip circles and glute stretches, so you quickly find yourself skipping the stretching to get to the good stuff. That good stuff is pretty addictive, too. The new exercises--available as part of the 6-Week Challenge and in single or customized workout sessions that you can create to use alone or with a friend--are a lot more varied than the bland new stretches. Cardio boxing with moving targets or against a sparring partner really gets your heart pumping and provides a much more thorough workout than the boxing in the original game, thanks to the addition of ducking and dodging. Step aerobics isn't going to change EA Sports Active's rep for being a woman's game, although you have to be tougher than a girly man to endure the hard routines offered here. Waterskiing, paddle surfing, and squash join the long list of sports already represented in the series, giving you quick casual games that are a lot of fun when competing with a friend. Track events have been jazzed up with a new Follow-the-Leader mode that turns the formerly dull laps into oceanside chases and gives you the goal of passing other runners with all-out sprints. Abdominal exercises now let you hit the floor to blast your abs in a series of crunch, curl, and leg-raise routines.

The only sore point is occasionally erratic detection when it comes to lunging. You can take that literally, too. The nunchuk doesn't register your movements sometimes when you go down low, forcing you to work overtime to complete goals and possibly strain something in the process. This was also a minor problem in the original game because some of the lower-body exercises weren't always picked up. Here, the issue seems a bit more noticeable, causing problems with the likes of waterskiing and squash because both force you to constantly drop down and lurch left or right. Thankfully, this problem is isolated to a few sports. It's also hard to say if everyone would experience this problem because the different sizes of players could affect how the controls respond.

EA Sports Active: More Exercises is very much an "if it ain't broke" sequel. But because the original game was done so well, there isn't much point in messing around with what works. While the game isn't as essential for virtual workout fans as its predecessor, this is still pretty much a must-buy if you enjoy sweating off the Doritos in the comfort of your living room. 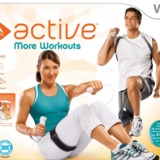 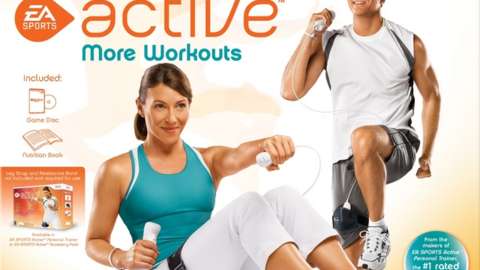 Take a six-week challenge to get into shape while putting the fun into squats, hurdles, and balance exercises.