Dynasty Warriors 2's beat-'em-up gameplay is simple enough to make it easy to get in to, and the game is interesting enough to keep you entertained for a while.

Koei has been retelling the same set of historical stories for years. It started out with the Romance of the Three Kingdoms games, which have been around since the days of the NES. The first Dynasty Warriors game was a fighting game for the PlayStation, and it marked the greatest departure that Koei had ever made with their set of historical figures. Dynasty Warriors 2 melds the action from the first game with some of the strategic and simulation elements that Koei is famous for. When it all comes down, Dynasty Warriors 2 is essentially a revamped Final Fight clone with a deeper plot.

Dynasty Warriors 2 is based on the Romance of the Three Kingdoms series, in which three kingdoms - Wei, Wu, and Shu - battle each other in China during the second century. Much like in Sega's Spikeout and Eidos' Sword of the Berserk, you'll control a character in a fight against thousands of enemies in a 3D polygonal environment. Initially, you will be able to choose from one of nine characters (three from each kingdom) who all serve as the leading generals of their respective kingdoms. You can unlock about a dozen playable characters upon finishing the game. The health, attack, and defense parameters of each character vary at the start of the game, but ultimately the range of attack (determined by the different weapons) and the fighting style are the only things that differ. The control scheme is straightforward, consisting of jump, attack, and Musou (special attack) buttons. Tapping the attack button two times allows for air combos, three times to stun enemies, and four times for a chain combo. The L1 button is also helpful, since it allows for blocking, strafing, and immediately changing the camera angle to match the direction your player is facing. You can also switch to first-person mode to shoot arrows, which is a handy technique for attacking enemies from a safe distance.

At the beginning of every stage, a map of the battlefield is displayed with the locations and quantities of troops from your kingdom's battalion, as well as those of the enemy. A little bit of strategy helps in playing the game, but as your level increases, you can pretty much overpower enemies all by yourself. Cutting off enemy lines to prevent them from calling in reinforcements and defeating enemy generals to decrease morale are the fastest ways to increase your level and finish the stages quickly. The game is fun and exciting when playing the first two stages, but the game's difficulty increases pretty sharply in the third stage. Luckily, in addition to the main quest mode, the game features a free mode, which lets you replay stages you've already cleared and level up your character in the process. However, the game is repetitive enough as it is, and with only five stages, it can get old fast. There is also an intro edit mode, which lets you place your favorite characters in different scenes in the opening demo, much like in Namco's Soul Calibur. While you can always find your troops in the field, it seems like your comrades just stand in one area and don't help you in battles more often than not. It's as if they are waiting for you to clear up the front line so they can position themselves further into the enemy territory. Even a simple summon command would have helped. The other concern is that enemy bosses have a tendency to cheat. After being knocked down with a chain combo, they tend to use items to replenish health or to increase attack or defense. You, however, can do that only when you pick up an item from defeated enemies or when you destroy things like crates.

Despite some concerns, the game happens to be one of the most efficient among the PS2 games so far, as the frame rate stays at a constant rate of 60fps. Although the early version of the game had us worried, the final version successfully cut down the slowdown, which now occurs very rarely. It is also a demonstration of how powerful the PS2 hardware is, displaying dozens of soldiers on one screen. There are CG cutscenes with voice-overs between each stage as well, adding plot details. The music is mainly heavy metal rock, and, despite the cool opening intro sequence, the in-game music gets really redundant after a while.

Dynasty Warriors 2's beat-'em-up gameplay is simple enough to make it easy to get in to, and the game is interesting enough to keep you entertained for a while. It's definitely a solid purchase for fans of the genre. 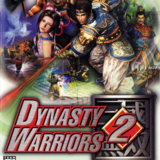