If you've beaten Dynamite Cop in arcades there's no real reason to buy the game.

Not a lot is being done with the side-scrolling fighter these days. The genre has fallen from its glory days of games such as Double Dragon and Final Fight, and hasn't really been able to reclaim its past achievements. While Dynamite Cop is great fun while it lasts, it leaves players disappointed and without any real sense of accomplishment once it's finished.

A cruise ship that happens to have the president's daughter aboard has been taken over by a gang of pirates led by a giant shirtless maniac with a weird glowing fur turban on his head. You're one (or two, if you're playing two-player) of three members of a crack commando team sent to infiltrate the ship, rescue the president's daughter, and take out the pirates' leader. You can play as Jean, the brunette female, Eddie, the lethal kickboxer, or Bruno, the character that would have been John McClane had Sega decided to keep the Die Hard license it used in the game's prequel, Die Hard Arcade. The gameplay all takes place aboard the cruise ship, with a quick trip to the pirates' island base at the end of the game. You get to choose your method of penetration with three selectable missions, namely by air, boat, or scuba. Each mission ultimately puts you in slightly different versions of most of the same rooms, but in a different order, with different cutscenes between them. Unfortunately, instead of delivering a new or refreshing feel, the missions seem too similar and are barely distinguishable.

The graphics bring back the feel of Die Hard Arcade, retaining the same look, only taken up a notch or two. Instead of having you just fighting it out anywhere, Dynamite Cop really makes you believe you're on a cruise liner, as the backgrounds range from bathrooms to engine rooms, loading docks to captain's quarters. There are tons of different enemies in the game, and all the characters, including the heroes, have their own distinct fighting style, throws, shooting stance, and power-up reactions. All the animations in this game flow very smoothly and are quite realistic. Unfortunately, the cutscenes are pretty hokey, and most of the FMV faces are scary; the president's daughter herself is one ugly girl. The game is full of cute little graphical surprises, such as the odd smiling man in the sauna posters, or the fact that as the characters take damage, they'll lose clothing, until they're eventually down to their shorts, (or shorts and a sports bra in the case of Jean). The score is rather dramatic, full of tension-building instrumentals that will remind you of watching the credits to a thrilling movie. While none are distinctly memorable, they serve their task of getting you in the mood to save all humanity - or, at least, an ugly little girl. The sounds are all done well. Pistols click as their safeties are being removed; semiautomatics make a chi-chack when you rack them; and spray cans make a psst sound when you blind your enemies with their contents. Enemies will goad you when you're hit with a particularly nasty blow, and everyone grunts or squeals in a devilishly satisfying way before they buy the farm.

I was most impressed with the sheer amount of stuff you can use as weapons in this game. Sure, most any fighting game has firearms, but how many games do you know of where you can beat someone with a fish, a urinal, or a vacuum? Almost everything in this game can be broken and then picked up and tossed at a bad guy. Even bad guys themselves can be taken by their feet and slammed around as a makeshift axe. The weapons in this game really add a lot to the game and change the game from simply punching and kicking, to tossing pastries and mannequins at people. As in the original, there are reflex tests inserted at certain points through the cutscenes that make you quickly hit a button, and if you fail you are punished by attack of additional enemies. In this version, you can pocket your handgun, and pick up other weapons, and then switch between them. This makes it really fun to hold on to your precious pistol and use it to arrest as many bad guys as you can. Unfortunately, the game is simply too easy, and too short. You can beat any of the three missions in less than an hour, and, in most cases, not use up all your continues. In fact, several times I was able to beat the game without using any continues. And, once a mission has been beaten, the next mission is all too familiar and something of a letdown. The game may be the perfect length for an arcade game, with the difficulty cranked to high, but for a console it falls horridly short. With no motivation to continue to play the game, you'll stop playing once you've beaten it and never play it again. As soon as you do complete the three missions, you're rewarded with a survival mode and a versus mode, which don't really take the game in any new directions. As with Die Hard Arcade, Dynamite Cop is packaged with a really old Sega game, this time it's an arcade perfect version of Tranquilizer Gun. Playing it is about as much fun as slamming your fingers in a car door.

I was probably the most excited person around here about Dynamite Cop, simply because I loved the arcade version and couldn't wait until I could take it home. I, of course, expected something more than just a quick arcade port, and unfortunately, these high hopes led to a sour disappointment. They could have done so much with the game: offered three player support, more missions, and better levels, but instead it just pushed the same old, same old. If you've beaten Dynamite Cop in arcades there's no real reason to buy the game. Overall it's a fun but obscenely short ride. 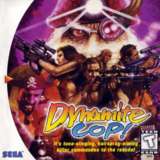