Dungeons and Dragons Eye of the Beholder Review

The game has a decidedly dated and awkward feel to it, though GBA owners who are also D&D fans will find some redeeming qualities.

As time goes by, the Game Boy Advance is becoming home to a decidedly interesting variety of games. In addition to all the original platformers, pseudo-3D racing and sports games, and surprisingly good role-playing games, we're starting to see more and more ports or compilations of classic arcade games, 8-bit and 16-bit console games, and even computer games for the tiny system. Eye of the Beholder falls into the latter category--it's an odd translation of a once-famous Dungeons & Dragons-based computer role-playing game. Most Game Boy Advance owners probably aren't familiar with the original, both because it's a PC game and because it's about 12 years old. Thus they won't realize how this new GBA version of Eye of the Beholder is actually a big departure from the original, and they also probably won't get why some consider the original to be a classic among computer RPGs. That's because this new version of the game has a decidedly dated and awkward feel to it, though GBA owners who are also D&D fans will find some redeeming qualities.

The screenshots make Eye of the Beholder out to be a 3D first-person game, but it's actually not 3D at all. The entire adventure takes place beneath the surface of the city of Waterdeep, and as such, throughout Eye of the Beholder, you'll be navigating tight, claustrophobic corridors one step at a time. There's no sense of transition as you move forward through the mazes, an effect that long-time gamers familiar with role-playing games like The Bard's Tale or the original Eye of the Beholder will immediately recognize. But anyone who hasn't been gaming for more than 10 years will be surprised by this now-crude effect, which is pretty disappointing considering the Game Boy Advance has proven itself to be capable of rendering 3D environments relatively smoothly in games like Doom and Duke Nukem Advance. Furthermore, the dungeons in Eye of the Beholder use extremely repetitive artwork, and the only real variety comes from seeing different types of stone walls in the different levels of the dungeon, so don't expect to see a lot of interesting sights beneath Waterdeep. A mere handful of canned sound effects and a near absence of music do nothing to help the presentation.

For what it's worth, the first-person sequences do look basically similar to those of the original 1990 game. On the other hand, the game's combat is completely different on the GBA. In the original, you'd fight from that first-person perspective, but here, the game switches to an isometric view that's reminiscent (both visually and otherwise) of old, old computer role-playing games such as SSI's Gold Box series and the early Ultimas. Here you'll control your party of up to six adventurers one at a time as they combat numerous opponents using melee weapons, ranged weapons, and magic. The controls are pretty clunky--you'll have to press diagonally on the D pad to get your people to move anywhere, and the pace of the battles is pretty slow. The combat has some other frustrating points, such as the fact that there's no good way to maneuver your party members around each other. But it can still make for some good, tactical fun as you try to keep your weaker party members out of harm's way while bolstering your front lines with healing spells and such. A pretty good variety of magic is available, including D&D mainstays like magic missile and fireball.

Still, the fighting can get very repetitive, and when you aren't fighting, you're navigating corridors, which certainly isn't any more fun. Besides the inherently mazelike structure of most levels, you'll come across an assortment of traps, hidden doors, and puzzles that will bar your progress. Some of this stuff can be so subtle that you'll end up wandering about without much of a clue of how to proceed until you stumble upon a solution. This sort of game design used to be acceptable in computer role-playing games, but it's difficult to appreciate now, at a time when games can challenge you in much more compelling ways.

The presence of an auto-map feature is only marginally helpful as you walk through countless passageways, as it can be difficult to tell where you've been and where you haven't. Other aspects of the game are even clunkier. Each character has his or her own inventory, so switching equipment between characters is a real chore. Also, for some reason, the game seems to provide no information about any of the weapons or armor you'll find. If you're a D&D buff who knows offhand whether a dwarven war axe is better than a falchion, then more power to you, but it would have been nice if the game or even the manual had provided this information. You don't even get any feedback in battle, so who's to say what sorts of bonuses or penalties your characters have due to their particular combinations of equipped weapons and armor? You'll just have to get a feel for it. Considering how statistics-heavy most Dungeons & Dragons games are, and considering how complicated Eye of the Beholder is in other aspects, it's awfully strange that it doesn't clue you in to a lot of interesting and useful data.

The game uses a stripped-down version of the 3rd Edition D&D rules. Only four basic character classes are available, and there aren't many races to choose from when creating your party members. Creating your own characters involves the cumbersome process of rerolling your ability scores over and over until you generate some decent numbers, though a default party is available. The game also includes a number of 3rd Edition D&D's social abilities, such as intimidate and bluff, which can figure into the game's occasional interactions with non-player characters. These probably make for some of the more interesting moments, though they still aren't that special, and character interaction is generally very rare.

Much like the classic Dungeons & Dragons-based computer role-playing games, Eye of the Beholder can last you for a while. But this awkwardly designed and rather ugly-looking game can by no means be recommended to everyone, nor is it necessarily suitable for fans of other GBA role-playing games. The best things Eye of the Beholder has going for it are its nostalgia value for fans of the original and its use of some Dungeons & Dragons rules and characters. If that's enough for you, then by all means give this decidedly unusual GBA role-playing game a shot. 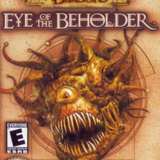