Throne of Agony gets the basics of a good dungeon crawler right, but an oversimplification of the gameplay and some annoying bugs drag it down.

The Dungeon Siege series has carved out a solid niche for itself in the post-Diablo hack-and-slash realm since the original's release on the PC in 2002. Throne of Agony is the franchise's first foray onto a handheld platform. The sleek Dungeon Siege combat and power leveling is pretty satisfying for the first few hours of gameplay. Most of what you'd expect is here: a ton of enemies and loot, a companion for your travels, and the addictive battles that makes the genre so appealing. Although the basics make a smooth transition, the effortless gameplay has been stripped down to its barest essentials, and a number of glitches and other frustrations slow down the quick pace. Even the most dedicated dungeon crawlers will feel the tedium before they get to the game's final act.

While you don't get to customize an avatar, you can choose from three starting characters. You also get to pick a familiar, although it can be replaced as you get further in the game. From there, you're given the usual skeleton of a story and head into the forests, deserts, and (of course) dungeons to slay a bunch of monsters and forage for loot. Despite some side quests, the path through the campaign is mostly linear and takes roughly 15 to 20 hours to complete. To its credit, the narrative takes some surprising turns, and much of the dialogue is specific to the character you choose, which is a nice touch. However, you've probably heard most of it before.

The Dungeon Siege series isn't known for its storytelling prowess anyway because its claim to fame has always been the accessible and focused combat. Throne of Agony is no exception. The controls are responsive and should be familiar to Untold Legends or Dark Alliance fans. Although some abilities are more useful than others, you'll mostly stick with your standard attack, unlocking and leveling up new skills as your character progresses. Performing attacks and using inventory items, such as health potions, is as easy as pressing a button or pulling a trigger. Therefore, you'll spend little time fumbling around in your inventory during the heat of combat. Climbing levels is an equally speedy and streamlined process, and you unlock new sets of abilities when you hit level 30 and again at level 60.

You'll be initially taken in by the action because there are a lot of different enemies with varying attacks. Even with wave after wave of baddies, combat is easy on the standard difficulty level, particularly with your companion helping you out. It all makes you feel pretty powerful, and you'll look forward to the next skills and better weapons and armor. Some other details freshen up the familiar action, such as the easy method of comparing inventory items and loot on the ground with your current equipment. But with your character customization limited to spending points on a small number of stats and skills--and no other party members to handle--the straightforward battles of the series unravel quickly. The series has always been about getting down to the basics. However, with many franchise innovations gone and others reworked, it all feels somewhat lifeless.

Other Dungeon Siege traditions are lost in the translation. While the PC games offered plenty of inventory space, the limited room in Throne of Agony will frustrate loot collectors. These collectors will constantly be using portal scrolls to head back to town and sell or simply leave stuff behind. The freely explorable world has been scaled back as well, replaced with a world map used to access quest areas and towns. The mechanic itself works well, but the resulting long and frequent loading times halt the franchise's hallmark swift pace. Even gameplay proper is frequently interrupted mid-attack because the Universal Media Disc hitches and the screen pauses for a second or more in the middle of your frantic button mashing.

The addition of other glitches and oddities doesn't help matters. Models occasionally get stuck in the environment, which didn't present many issues when it was an immobile monster but was far more frustrating when our companion got trapped. It was also annoying on the occasions when our own avatar got swallowed up in the geometry, forcing a reload. The game menus supply their own consternation because they are unresponsive and often don't seem to register your button presses at all. We also ran into multiple instances where our battle companion didn't join us when entering a dungeon. However, un-summoning and re-summoning usually did the trick.

Despite all of the frustrations, Throne of Agony looks and sounds very much like a Dungeon Siege game, utilizing many of the same musical tracks and visual elements from Dungeon Siege 2. The signature beams of light still shine onto the forest floor, and you still travel on suspended platforms high in the trees. These touches go a long way toward lending personality when the gameplay gets formulaic. They also make it easier to ignore the generally bland dungeons and caves. Character animations are quite nice, and there is a satisfying sense of impact when your axe lands a blow or your spell finds its target. Thanks to an excellent symphonic soundtrack, decent voice clips, and a respectable variety of combat clatter, the audio design is even better.

The multiplayer is a nice addition but only supports ad hoc play for two players. The ad hoc mode works just fine, and any adventure is better with a friend. But in light of the myriad options in Untold Legends: The Warrior's Code, Throne of Agony's lack of Internet play is a dagger.

SuperVillain Studios delivered where it counted most, using the same durable foundation of simple hack-and-slash gameplay and quick leveling that powers the entire Dungeon Siege series. However, the frequent interruptions and other pace-breaking irritations magnify the adventure's repetition. Thus, what could have been another enjoyable romp through Aranna ends up becoming just another middling dungeon crawler. Throne of Agony is a decent distraction, but it lets down its pedigree by letting the seams show a little too blatantly. 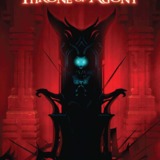