Dungeon Hunter: Alliance is a good way to get together with friends and take down fantasy monsters.

Solid, derivative, simple fun--that's the Dungeon Hunter: Alliance experience. It's the kind of fun you've had in other, better games, but this hack-and-slash role-playing game gets most of the basics right, sending you through a pleasant fantasy world where you slice up gargoyles and werewolves from an isometric perspective. Like a hunter's bow, character development is as flexible as it needs to be, and loot is as plentiful as rats in an innkeeper's basement. These aspects fuel your adventure, giving you ample reason to light up forests and castles with your spells as you take down a menagerie of typical RPG monsters. Dungeon Hunter doesn't have much in the way of wit or personality, and some mechanical issues crop up here and there. But whether you enjoy chopping up the shambling undead on your own or with friends, this downloadable PlayStation Network game is a cost-effective way ($12.99) to scratch the itch for a solid dungeon crawl.

If you've heard the title "Dungeon Hunter" before, it's for good reason: This is an adaptation of an iPhone game that was released in 2009. The basics are unchanged, including the generic story. You're dead royalty, revived by a fairy that needs your help ridding your once-vital kingdom of the new queen's tyranny--and freeing the fairy's sisters from their crystalline prisons. This is high fantasy at its most predictable, and there is no voice acting to help bring any of these characters to life. Nevertheless, the writing's conversational style is appealing and admirably avoids genre cliches in a game otherwise devoted to them. But like many similar games, the plot is an excuse to lead you through city streets and elemental towers, hoarding loot and obliterating the skeletons and slimes that block your path. You do this either as a hardy warrior, a squishy spellcasting mage, or an agile rogue while mashing the attack button and throwing in various special moves that you earn as you level up.

It's a timeworn recipe, but it works well here; this is due in part to the constant supply of loot and coins heaped upon you. You collect a good number of items you can't use or don't want, but enough useful stuff comes your way so that you never feel mired in the game's naturally repetitive combat. You gain levels quickly, and doing so means spending points in core attributes (strength and vitality, for example) and purchasing new skills or improving those you have. The skill trees aren't complicated, but they offer plenty of enjoyable freedom to develop your adventurer as you see fit--and if you don't like the direction you've taken, you can redistribute your points for a modest amount of gold. The great pace of the leveling and looting is the source of Dungeon Hunter's addictive nature, and it's fun to watch your prince rise from weakly zero to mighty hero. You might even be tempted to return once finished, if only to try out the fine weapons and armor you earn upon defeating the final boss or, perhaps, to check out the functional if unremarkable PlayStation Move support.

Regardless of your class and weapons of choice, combat is in the Baldur's Gate: Dark Alliance/Champions of Norrath vein: You mash-mash-mash your way to victory, occasionally throwing in additional attacks and spells, as well as constantly quaffing potions to keep yourself in good health. If you choose the warrior or rogue class, you don't live a spell-free existence, however: Your fairy friend and her four sisters can give you a hand in battle. You equip a fairy as you would a weapon and unleash its magic in battle, bathing the immediate area in fire or summoning a tornado to wreak havoc. Nonetheless, the combat can get tiresome as you move down the various corridors, especially when a side quest might send you through areas you've previously visited, where enemies you have already vanquished have respawned. Luckily, there is a fine array of enemies and environments, so no sequence overstays its welcome. The occasional collision issues that crop up are more problematic, particularly when using melee weapons. You might watch your axe clip through enemies and gold-bearing boxes several times in a row before you land a hit, which can make certain challenging encounters all the more frustrating.

Fortunately, these intermittent oddities don't greatly hinder the enjoyment, especially if you join up to three others for some cooperative chaos. This is where Dungeon Hunter: Alliance shines, especially against the bigger bosses. A couple of players may engage the main target while others take down the lesser meanies that complicate the fight. Lightning and fire fill the screen when players call forth their fairies' spells, which gives the game some visual panache that it otherwise lacks. You can team up with others both online and off, though the online server browser makes it difficult to find an appropriate game. You can limit your game search based on player level and progress, and you can see what country the host lives in, which is nice. But the browser has a tendency to freeze for many seconds, leaving you to wonder if the game has crashed or if it's just thinking really hard. You might try to join a game, only to fail enter its lobby for no known reason, and even try to host a game, only to be kicked from your own game due to a server error.

However, these intermittent hang-ups are worth enduring for the joy of beating up on bandits with a few of your friends. It's too bad that the energetic online play doesn't translate to an equally lively presentation. Dungeon Hunter: Alliance looks and sounds nice enough, but it doesn't have the charms of downloadable RPGs like DeathSpank or Torchlight. While the game lacks its own identity, it showers you in loot and levels, utilizing genre conventions to good effect and giving you lots of ways to mold a character suited to your play style. This adventure is a good length (eight hours or so) at a good price, and co-op play and the class flexibility are appealing enough to make these dungeons worth crawling. 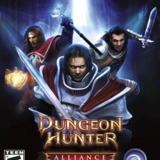