While some may take away from Dune 2000 a fleeting sense of nostalgia for the classic, most will invariably leave the game disappointed and wondering how a true sequel might have turned out.

There are two kinds of people: those who have played Dune II, and those who haven't. Individuals comprising the former category probably retain a fond memory of the game. These, then, are the people for whom Dune 2000 was created. It's a remake of the original, designed to tug at heartstrings with its retouched graphics and sound, and same old gameplay. Dune II combined action and strategy in a famous science fiction setting back in 1993. The formula worked so well that it single-handedly gave rise to a wildly popular gaming genre, much like id Software's Wolfenstein 3D defined the first-person shooter shortly beforehand. Yet neither Dune II nor Wolfenstein withstand the test of time, since so many superior and similar games have emerged since then. For that reason, even those who enjoyed Dune II will find Westwood's remake disappointing, if not distressing.

Sure, Dune 2000 looks better than the original, but it doesn't look nearly as good as Dune II did for its time. Certainly, Westwood deserves credit for making the game look more consistent with the 1984 David Lynch film than the original ever did. In particular, the spice harvester and the interstellar frigate look like they were pulled straight from the celluloid, and the new full-motion-video intro and cutscenes, cheesy though they may be, are equally authentic. Otherwise, Dune 2000, even with all-new graphics, looks old and tired - like a less colorful version of Command & Conquer with tiny, plain-looking military units and drab background graphics. With the exception of a few unique units and structures, all three sides look identical. And because the game takes place on a desert planet, every single map looks exactly alike. Thus, other than the occasional crashed ornithopter here and dead sandworm there, every single map looks equally boring.

An optimistic way to describe the sound would be to say it corresponds to the graphics appropriately. The sound effects in Dune 2000 are all subdued and weak, with gunfire, explosions, and unit acknowledgments so dry as to make the desert world Arrakis itself go green with envy. At least each warring House has its own narrator much like in the original, who helps differentiate the three just a little. On the other hand, Dune 2000's soundtrack is excellent. Many tracks are directly lifted and enhanced from Dune II; others recall Toto's strange yet stirring score from the film. If only the in-game graphics stood up to the soundtrack and full motion video, at least the substandard gameplay wouldn't seem so obvious.

The original Dune II is crude by present-day real-time strategy standards. Mounting a large-scale assault was a cumbersome matter of individually selecting each unit and ordering it to proceed to the enemy's base. Westwood was kind enough to implement band boxing to make Dune 2000 a little more modern, although unit production queues remain absent. Otherwise, the game plays much like it did in 1993: You lay foundation for a base, build structures, mine spice to earn cash, avoid the sandworm, build a lot of units, and attack the enemy. It's true that several gameplay elements of Dune 2000 remain rather interesting - particularly the starport, which allows you to pay up front for reinforcements at the fluctuating market price, usually less than what you'd pay to build your own. But for the most part, Dune 2000 is simple and boring.

Part of the problem is that Westwood attempted, but failed, to balance the game. In the original, once you built a trooper, you had no use for infantry; once you built a quad, you no longer needed the trike. In turn, a siege tank put the combat tank out of a job, and it could cream the quad and squish the trooper. So using mixed forces wasn't a very good idea, since the siege tank could pretty much beat them all. Well, Westwood sought to change things for the better in Dune 2000 - the trike mows down infantry, the trooper's bazooka is good against vehicles but weak against other troops, and the quad's rockets can take out a trike easily. The siege tank, in turn, is a potent anti-trooper weapon.

Sadly, the combat tank beats them all. It has a bit of trouble shooting infantry, but it can run them down with no problem. And everything else - quad, trike, siege tank - is mincemeat. It's almost like Westwood imposed a rock-paper-scissors model for unit balance, where rock always wins. Still, some may find these attempts to balance the game admirable even if not entirely successful. But die-hard Dune II fans will more than likely see them as sacrilege. Certainly, the game isn't all about the combat tank - each House still has its unique weapons that add a little flair when they finally become available. But more often than not, you'll find yourself building multiple heavy factories to churn out combat tanks quickly, and forgoing construction of other units altogether.

Each House has its own campaign that starts out easy and gets tough toward the end. Many of the missions are similar to the original, though Westwood did throw in a few change-ups where you must capture a key installation or defend your position for some period of time, and more. The campaign is actually fun for a while, if only because the cutscenes in between missions are worth the marginal effort; the computer opponent certainly doesn't pose much of a challenge. Unlike the original, Dune 2000 also lets you play against human opponents. Westwood's embedded Internet service lets you jump into games with up to five other players quickly. However, multiplayer games are often inexplicably slow and laggy, even over a network. On top of that, because of the simplistic play, Dune 2000 cannot possibly keep you entertained for long, no matter how many human opponents you can find. So in the end, Dune 2000 is a tragic game, not so much because it is poorly made, but because it is ill-conceived, a tremendous opportunity wasted. While some may take away from Dune 2000 a fleeting sense of nostalgia for the classic, most will invariably leave the game disappointed and wondering how a true sequel might have turned out. And those who didn't play the original Dune II in its heyday will likely look upon this remake and wonder how anyone could possibly hold this game dear in any shape or form. 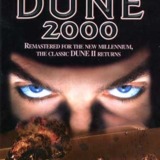