With titles like Toy Story 2 and Gex 3 out for the Game Boy, Duke Nukem simply falls short.

Duke Nukem for the Game Boy Color is a throwback to the two PC side scrollers of the early '90s that inspired GT Interactive and 3D Realms to take the hero to the third dimension, making him practically a household name. Now that we've grown accustomed to Duke, his witty one-liners and his harsh treatment of anything xenophobic, it's hard for us to return to his humble, 2D beginnings. But at least he's portable.

Duke has a few gimmicks up his sleeve as he conquers the alien invaders: a shotgun, a machine and stun gun, a grenade launcher, a rocket launcher, and a flamethrower. He can also drive a hopping tank and a miniature rocket ship. Despite the Duke license and the arsenal of weapons, however, this title bears no resemblance to the current incarnations of the series. But does this game survive on its own? Not really, though the fun of finding a machine gun and laying waste to scores of enemies still can't be beat.

The controls in this game (especially jump and crouch) aren't responsive enough to allow Duke to avoid enemy fire. Fortunately, enemy fire doesn't inflict that much damage on the &Uuml;ber-Rambo, so the game basically devolves into a title of getting shot, shooting back, finding health, and repeating. As it is, the game is extremely repetitive, with bland background graphics doing little to add to the action. You can also pick up the letters in "Nukem" to earn an extra Duke, and the letters are present so that you know that you're still heading in the right direction.

The game's sound effects are flat and bland (though the default shotgun sounds rather realistic for the Game Boy), and Duke and his enemies have very few frames of animation. With titles like Toy Story 2 and Gex 3 out for the Game Boy, Duke Nukem simply falls short. Sure, you can run around blasting everything in sight and see the occasional splatter of blood, but there are better portable platformers on the market. 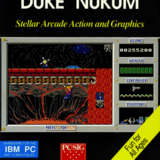 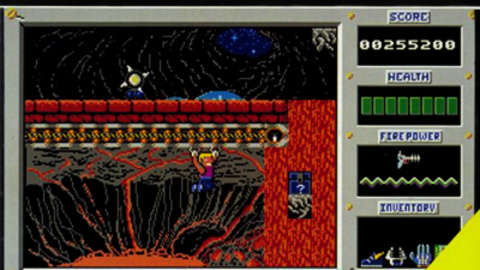 With titles like Toy Story 2 and Gex 3 out for the Game Boy, Duke Nukem simply falls short.