It's a fun shoot-'em up whomever you're shooting.

Ever since I finished Super Mario 64, I've eagerly scrutinized the boxes of the games that come through the VideoGameSpot offices for pictures that indicated to me that this game would finally be the one that would once again give me the thrill of seeing this incredibly powerful little platform perform the graphic miracles I'd seen when that Mario 64 cartridge filled the slot at the top of the unit. This one? No, this one? Wait... maybe this is it - GoldenEye! In fact, that was the game I was looking for - a thrilling graphic tour-de-force! But it's not the game I'm reviewing. Duke Nukem 64 is today's subject. Duke, the older, less-capable, gone-to-seed cousin of Quake's PC warrior has been ported to the N64, bringing his characteristic sprite-based enemies and bad attitude to the House That Mario Built, and it is my task to tell the story of what happens now that he's here.

It wasn't a leap in graphics technology that made Duke so popular - the 3D engine inside it was merely a shade better than previous games and was soon put in its place by Quake. It was the wildly humorous and sleazy game world 3D Realms created that won over gamers, taking them to places they'd never been before - an adult bookstore, a space station, a strip bar - and giving them a protagonist with an attitude they couldn't resist. Duke's pithy Bruce Campbell-isms at appropriate moments during the game, like his gravelly, throaty "come get some" when you have him pick up a weapon he particularly likes at the time, were adorably macho and drew the gamer in further.

Most of these elements have been preserved in the N64 port. Naturally, Eurocom has removed the more salacious aspects of the game - figuring, I suppose, that some parents might object to their children learning about sex by giving sprite-based go-go dancers five-dollar bills to bare their breasts, only one of several moments of highly prurient pleasure that the original game offered. But those with a eye for irony will note that all the violence of the original game has been preserved. Duke's armaments still do all sorts of awful things to alien bodies, and their screams, when struck or in their death throes, remain music to his ears (and his, to theirs).

Gameplay follows the now-predictable 3D shooter pattern - enter a level, pick up weapons, shoot anything that moves, find objects that let you complete the level, and move on to the next. The weapons continue to be genre-standouts - like the pipe bomb, which can be dropped one place and exploded when Duke is out of range, and the grenade launcher, which shoots explosive projectiles whose pleasant, hollow clanking as they bounce along the ground is as often as not followed by the pulpy, squishy sound of the rending of alien flesh. Other items the player may find during the game are devices to let Duke travel through water and air, Duke-lookalike holograms that can be deployed anywhere to fool evil minions, and vials of Vitamin X that can be swallowed to give our hero the burst of speed he needs to make it around one last bend.

It's sad but unsurprising that the game's look pretty much duplicates the original PC game. While texture-mapped scenery looks a little better, no doubt due to techniques like hardware antialiasing that the graphics chips inside the N64 were made for, all monsters, items, and basically anything changeable in the environment are implemented as sprites - essentially, sets of still pictures that show the same character in different perspectives. It's not very vivid. The Sony PlayStation port has also appeared and looks just about as good. Doesn't anyone think that's a crime? Shouldn't games shine more brightly on the N64?

Three more controllers plugged into your Nintendo lets you and three friends go at it on a split screen, either cooperatively or competitively. It's fun to blow your pal away; it's too bad that he can see you stalking him (since you're both watching the same TV). You can play on any level of the game, and you can choose to end each level after a set number of minutes or kills. You can also call up one to three Duke bots, computer-controlled Nukems that attack you with vastly more viciousness and accuracy than any of the game's monsters. It's hard to tell them from your human opponent, since you all wear the same blue jeans, red tank-top, boots, and flat-top haircut, but who really cares. It's a fun shoot-'em up whomever you're shooting.

And that's Duke Nukem 64 in a nutshell. The graphics aren't up to platform snuff, but it's a decent 3D shooter, and it's got style. When Quake 64 ships, plenty of people will buy it for the flashy graphics and hot reputation, but those who've already been wallowing in Duke's testosterone-laden smirkfest (and I mean that in the best possible way) might be having more fun. 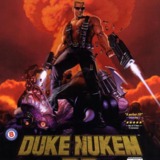 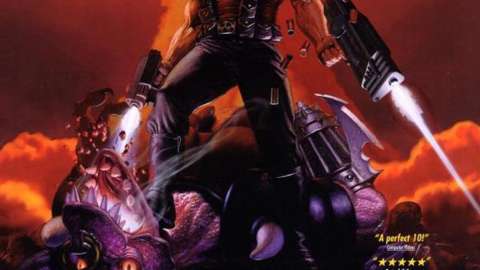