Duck Dodgers is a decent 3D platformer with a well-used Looney Tunes license.

Anyone who grew up with the Looney Tunes characters should be familiar with Duck Dodgers, the sci-fi spoof featuring Daffy Duck as an inept space adventurer. His troubles usually stem from Marvin the Martian, denizen of Planet X, who this time has created a giant death ray to blow up Earth. Unfortunately (or fortunately, depending on your viewpoint), Marvin doesn't have enough energy to fire the ray, so he has set forth his lackeys to four different planets to collect "atoms" to power it. Duck Dodgers, defender of Earth, has been charged with the duty of collecting the atoms before Marvin can.

Duck Dodgers uses the 3D platform game archetype set forth by Super Mario 64, and if you've played Super Mario 64, Banjo-Kazooie, or really any other 3D platformer, you'll already be familiar with the game's control, structure, and goals. You use the analog stick for movement, A button for jump, B for attack, Z to use special items, and combinations for the standard double jump and butt-stomp. The special items are strange and varied, from an ACME rocket strapped on your back to an oversized boxing glove. The control is fairly solid, though the learning curve on the jumping is a little steep for a game targeted toward a younger audience.

There are five planets, each with its own a main hub area from which the sublevels - the actual meat of the game - branch off. If you complete the goals of a sublevel, another sublevel becomes available. Collect all of the atoms on the planet, and you'll face the level boss. Once he's beaten, you'll advance to the next planet. In an odd licensing decision, the bosses are all characters from other Looney Tunes cartoons, with their planets themed in an appropriate manner; Hassan the ruthless Arabian king has an Arabian-themed planet, Rocky the pint-size gangster with the ten-gallon fedora inhabits a gangster planet, and so on. While it may seem strange traveling to a planet themed like a 1930s gangster film, the themes are consistent within the planets and add a great deal of variety to the game. Credit for the game's variety should also be given to the different gameplay elements, with the standard 3D platformer fare of collecting items and puzzle solving broken up by minigames such as a pong variant and a first-person shooter mode. These fun deviations make the platform jumping over bottomless pits much more bearable.

Graphically, Duck Dodgers achieves its goals proficiently. The characters are true to their cell-animated counterparts, and the levels are colorful and varied, with recycling of the textures a rarity. The character animations, on the other hand, are fairly limited, as are the sound effects that accompany different actions. More likely than not, you'll find yourself tiring of the springy jump sound and Daffy's exclamations quickly. The music is nothing short of average, Carl Stalling-inspired filler music, though the quiet plucking of violin strings that accompanies Daffy's sneaking around is a nice touch.

The game's primary flaws are rather contradictory in nature and can make for occasional frustration. The game is, in a word, easy. Enemies can be avoided without much fuss, the bosses have simple patterns and most won't take more than a couple tries to beat, the life-restoring power-ups are abundant and regenerate rapidly, and the puzzles are usually quite simplistic. However, in what is apparently an effort to increase the difficulty of the game, save points are sparse and irregular - there are portions of the game where there isn't a save point for a good 30 minutes. Unfortunately, this doesn't make the game more challenging, but instead just taints the game with a bad string of irritation.

In all, Duck Dodgers is a decent 3D platformer with a well-used Looney Tunes license. While it's a simple game targeted toward a younger audience, the solid gameplay should suffice for the people who are old enough to remember the Duck Dodgers character from the old Merrie Melodies, if only for a weekend rental. 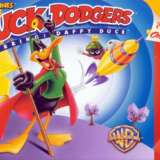