Ducati World Racing Challenge makes a good effort at providing the kind of gameplay and variety that racing fanatics desire.

Between EA Sports' Supercross and THQ's Championship Motocross 2001, it has been a good winter for PlayStation motorbike games. Acclaim's latest entry, Ducati World Racing Challenge, aims to offer a third alternative. Bearing the renowned Ducati license and sporting an array of options that's sure to draw parallels to Gran Turismo, the game is worth looking into if you're looking for an arcade motorbike experience that's not as toddler-friendly as others in the genre. A simulation it's not and perfect it's not, but there's some spice to be had with Ducati World.

Before delving into what Ducati World has in store, you should know that it will take some time to acclimate yourself to the game's mechanics. Even though Ducati World isn't a simulation, developer ATD has still put a great deal of thought into the game's handling and physics. Because of this, you have to pay careful attention to how slight surface variations or terrain composition will affect your braking and acceleration. Crossing over dirt and gravel increases steering sensitivity, which may cause you to veer into a retaining wall, while oversteering when rolling over bumps may cause you to jackknife. Making contact with other riders is a further no-no, and it will often send you flying headlong across the pavement. There are also random times when the game's physics seem to hiccup, which can also lead to any number of unforeseen, nasty spills. Despite these nuances, though, Ducati World Racing Challenge is definitely geared toward the kind of motorcycle fan who wants an inviting, arcade-style experience.

With that out of the way, there is a great deal of tangibility packed into Ducati World's game modes. There's the Ducati life option, a Gran Turismo-style career mode that lets you live the day-to-day life of a rookie motorcycle rider. You'll start with $10,000 and a low-end bike. Where you go from there is up to you. As you complete races and earn money, you can purchase new bikes from the game's five showrooms or acquire upgrades to improve your bike in eight different areas. After tweaking your bike's power, weight, acceleration, braking, and grip characteristics, you can then take your bike back into battle for more money. A series of license tests teaches you new skills and prepares you for tougher events, while a challenge mode lets you pit your skills against a big-name superstar (or a human opponent) for cash or a new ride. And you can purchase new helmets and leathers--if you're into that sort of thing. For action fans, the game's quick race option, an "arcade career" mode, lets you turn a choice of five bikes and five courses into more than 40 true-to-life Ducati motorcycles and nine realistic courses. Each bike has its own power, weight, and top-speed ratings, while selections from Ducati's '50s, '60s, '70s, '80s, Monsters, Sport Touriers, Supersports, and Superbike lines should bring a tear to any motorcycle aficionado's eye. Each mode features a two-player split-screen option for human competition as well.

Ducati World plays reasonably well, although its CPU AI is an acquired taste. As far as handling is concerned, shifting is automatic, but you can manually override it during the race. You don't really need to worry about spilling out either, since your rider will lean and compensate as necessary, provided you don't hit a nasty bump or run into an opponent. There's also a slight buffer area when you run up against walls or cross terrain boundaries. In slight instances, your bike may tilt or you'll kick up dust, but you'll retain forward momentum. Your real competition in the game is mostly avoiding the CPU-controlled players. In early stages of the Ducati life mode and on normal difficulty in the quick race mode, CPU riders sway and veer across the road as if they're drunk. Without rhyme or reason, they're content with slamming into the nearest wall or obstruction, with little care as to their own safety. If they can bring you into harm's way with them, they will. Strangely, once you switch the game to a higher difficulty or get into tougher Ducati life races, CPU-controlled riders become master bike handlers, rarely making a single mistake. Because of this, you'll need to get used to winning early on and losing repeatedly later.

Although many people will be able to warm up to Ducati World's gameplay characteristics rather quickly, the same can't be said for its visuals. In a nod to Sony's Gran Turismo series, Ducati World sports some of the most intelligent course designs ever found in a home racing game, but then ruins the presentation with poorly rendered bike models and the worst use of textures and lighting since Road Rash. A mass of low-resolution green, gray, and blue textures barely does the game justice. It would have been nice if the reciprocal trade-off were an improved frame rate, but even that is hit or miss at times. To make matters worse, the game exhibits amounts of texture seaming and warping similar to those in circa 1997 PlayStation releases. If you like the Ducati line or you're aching to try out a refreshingly different motorcycle game, you'll be able to stomach Ducati World's visuals--provided you go in with reasonable expectations.

On a similar note, you'll never mistake Ducati World's soundtrack for that of Gran Turismo or Ridge Racer Type 4, but it is about what you'd expect from a third-party motorcycle game. Generic techno and jungle music provide the per-lap musical score, while an adequate assortment of engine murmurs and skid effects rounds out the game's acoustic vibrations. In a move that Ducati lovers will adore, each of the game's more than 40 bikes has its own unique engine noise and pitch across a variety of acceleration levels.

Complaints aside, Ducati World Racing Challenge makes a good effort at providing the kind of gameplay and variety that racing fanatics desire. The physics are sometimes unwieldy and CPU AI unpredictable, but there's a lot of fun to be had earning licenses, winning races, purchasing new bikes, and kitting out your garage. 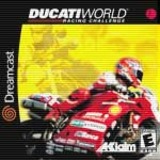