It's not often a game this bad is released in the industry.

Altruism amongst game reviewers dictates one important rule of thumb: "We play the stinkers so you won't have to." With that said, Dual Heroes on the Nintendo 64 is one of the worst fighting games ever made for a home console system. Avoid at all costs. Developed and released by Hudson in Japan last Christmas, the game was panned by critics and gamers alike for being half the game it was championed to be. Electro Brain has decided, probably against its better judgment, to release Dual Heroes stateside. With the dearth of quality fighting titles for the Nintendo 64, it could have easily become the standard by which all other fighters would have been judged. Unfortunately, Dual Heroes has turned out to be the epitome of how exactly not to make a fighting game, or any kind of game, for that matter.

Behind the putrid introduction is a story that's so ill fitting to the game's overall presentation it's almost satirical. Why developer Hudson felt the need to supplement its fighting game with a long-drawn-out sociopolitical plot full of intrigue and complex timeline issues remains a mystery. Earth faced its biggest crisis ever, 120 years ago, as the tectonic plates shifted massively across the Pacific Ocean swallowing entire countries while creating new lands and continents. One hundred years later, a special type of body armor was developed to combat a new threat to mankind known as the Zodgierra. Huh? Four paragraphs later, the text is still scrolling, and a fight is about to take place - but nobody seems to care. Who are the Zodgierra? And why are these Power Ranger rejects beating each other to a pulp in an elevated arena? The answer is simple: Hudson wants to cash in on the lucrative fighting-games market.

Dual Heroes offers five modes of play: story, versus VR, versus two-player, robot training, and practice. In story mode, you choose from a roster of eight characters and fight against some of the most inane AI ever coded to win the champion title. The two-player versus mode is also fairly self-explanatory and contains no real surprises. To its credit, Dual Heroes contains the innovative versus VR and robot training modes not available in other fighting titles today. In versus VR, you battle against "virtual gamers" from the world of Dual Heroes. Each virtual gamer has its own fighting style - some are quick and offense heavy, while others turtle and evade. As with most prefab enemies, these virtual gamers have strengths and weaknesses, depending on which character they choose to fight with. For all its innovation, one has to presuppose that this mode was ironically implemented for those Dual Heroes devotees with no friends to fight against. Another interesting mode is the robot training mode, where the CPU learns the moves that players perform and saves them to the Nintendo Controller Pak. For anybody who's ever played Virtua Fighter 2 on the Saturn, this mode is similar to the customizable CPU, which slowly learns your moves and patterns to later use against you as you log hour after hour into the game. Despite numerous spins on the genre, Dual Heroes still doesn't cut it. For one thing, the virtual gamers themselves are rendered generic by the game's general lack of gameplay. Who cares about advanced AI when you can button-mash them to death with both eyes closed and one hand tied behind your back? Another gimmick employed by Dual Heroes is the "medal system." When you finish the game, you earn medals, which you can then use to wager or bet against your friends. However, there's simply no incentive to ante up the medals, because the ultimate reward for having collected a maximum of 20 medals is just a gold medal that you proudly display on your TV but does nothing to unlock any Easter eggs or new characters. To add insult to injury, the gold medals don't even look that nice.

Like everything else in this game, the controls are abominable. Movement is controlled by using the Nintendo 64 analog stick. This design decision would have made a lot more sense if Dual Heroes actually registered analog movements. As it is, controlling your "Dual Hero" is akin to using a large and cumbersome PC flight stick to execute moves that require a lot of quick taps. To make matters worse, there is a large number of moves that require you to perform half circles or full circles. What was Hudson thinking? The Nintendo 64 analog stick is atrociously unintuitive when it comes to circle movements due to the fact that it's designed to "lock" onto the four diagonal corners for more 3D-intensive games. Like Virtua Fighter 3, Dual Heroes uses four buttons: guard, punch, kick, and Z-movement. However, unlike the Virtua Fighter games, the controls are unresponsive and sloppy. The least Hudson could have done was to allow the victims that actually purchased Dual Heroes to customize their own buttons on the Nintendo 64 controller (which must be one of the worst fighting gamepads ever).

Graphics and sound are so far below the average Nintendo 64 mediocrity that one has to wonder how Dual Heroes ever got an official "Seal of Quality" stamped on its package. Everything visual about Dual Heroes just screams bland, bland, and bland. The polygon textures are so blurry and phased out, the models might have actually looked better simply flat-shaded. For instance, the quality of the texture used on the floor of the fighting ring is so bad, nobody will have any idea what sort of nauseous mosaic he's stepping on. While the character models themselves look decent enough, their fighting moves animate poorly. This is a shame since each character's introductory poses are a gas to watch and really capture the essence of Japanese live-action sci-fi. As if the game doesn't already run like molasses, there's also an abundant amount of slowdown during the action. The sound effects in Dual Heroes are hard to describe because they're completely unmemorable. Music in the game carries the spirit of Japanese live-action television classics such as Ultraman, Kamen Rider, or Kikaider, but again, kitsch value can only carry this title so far.

It's not often a game this bad is released in the industry - twice. No game, of course, is completely without any appeal whatsoever. There will be somebody out there who will find the Power Ranger aesthetic and stilted gameplay totally engrossing. There may even be some out there who will inevitably think there are games far more offensive than Dual Heroes. They're probably right. Thankfully, I haven't had the misfortune to experience any of them firsthand... yet. 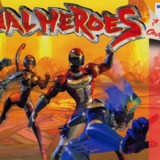 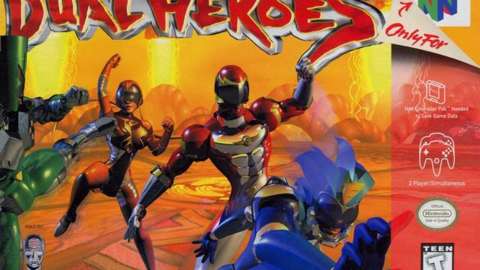 It's not often a game this bad is released in the industry.