It not only makes all the wrong moves, but it also finds new and innovative ways to make them.

There are a number of surefire ways to ruin an otherwise perfectly good game. Unfortunately for Druuna: Morbus Gravis, it features many of these design problems. The game is plagued by poor control, an unintuitive interface, time limits, ugly graphics, grating music, and one of the worst save-game systems ever devised. It not only makes all the wrong moves, but it also finds new and innovative ways to make them.

Druuna: Morbus Gravis is based on Paolo E. Serpieri's graphic novel of the same name, which was in turn based on his comic series from the bastion of nudie science fiction, Heavy Metal magazine. Visually, you get mostly what you'd expect: an abnormally buxom heroine and a menagerie of strange creatures that are more often than not shaped like things usually hidden by bathing suits.

The premise could make for a good game. Druuna is in a sort of coma, and you must access her memories to restore her to consciousness. You do this through the "brain container," a device that lets you enter her mind, move around in her synapses, enter her memories, solve puzzles, and then move on to the next memory. It's an interesting premise; back in 1998, Sanitarium proved that an adventure game based on exploring someone's psyche could be both frightening and entertaining.

Although the concept isn't bad, the execution is. Druuna's psyche is fragile, and certain situations take her closer to the point of no return--situations such as physical exertion, getting too close to monsters, and saving the game. Druuna has three statistics that you must keep an eye on--cognitive effort is a measure of how much time you've spent in her brain, cardiac activity rises in stressful or physical situations, and nervous tension increases when the other two increase. You can reset the first two at the expense of the third, but when nervous tension gets too high, you are cut off permanently. You can save the game or continue at a predetermined location after dying, but either of these actions causes a decrease in her mental well-being. After a certain number of saves or continues or just spending too long trying to figure things out, you'll be unable to go on.

Never has a game been so dead-set on making you fail and then punishing you so severely for doing so. The adventure game sequences are broken into two distinct types. The most common is like something out of a typical 3D adventure game, in which you walk around the world, pick things up, and solve puzzles. Actual puzzles are very rare--mostly you'll just be maneuvering through silly mazes and jumping over holes in the floor. There are other equally uninspired action sequences--for example, having to walk and duck under a pair of spinning metal blocks.

These sections would be unexciting in any game, but Druuna's control scheme makes getting through them downright unpleasant. Druuna walks, ducks, and turns slowly. She can run, but doing so causes her vital signs to become unstable. You can execute a quick 90-degree turn, but often you'll need something more precise than that to move around in the narrow environments. It's almost impossible to adjust her direction while moving, so you must stop her, do her little shufflelike turn, and then hope you are lined up perfectly with whatever area you are trying to get to. If she's too near an object, she can't turn at all, so you need to back her up and try again. The keyboard controls are unresponsive in the extreme--there are moments when you'll hit a key two or three times before she responds.

And while the control problems are bad in the action sequences, they are even worse in what the manual calls the "interactive segments." These are nothing more than reaction-based puzzles reminiscent of the game Dragon's Lair, in which you must hit the appropriate arrow key when it is indicated on the screen. Often, though, you'll need to hit the key before the indicator appears, as the game takes a moment to register your keystroke. In either type of puzzle, you'll inevitably die a few times. But because of the aforementioned save and continue restrictions, you'll end up reverting to a much earlier position, losing a great deal of progress and having to jump over a bunch of annoying holes you've already jumped over before you get to the problem area, fail, and repeat the whole process again.

Fans of the Druuna comics may appreciate seeing some vague semblance of the original in 3D, but for the uninitiated, it all just looks bland and ugly. The "erotic" moments--there's plenty of topless cavorting--just look embarrassing due to the simple character models. There's some attention to detail in the environments, but they're mostly just your average, dystopian empty warehouses, filled with scrap metal and hanging wires. Some of the creatures look decent, but they are all, with the exception of Druuna, burdened with terrible voices. And the whole game is saddled with a boring metal/techno soundtrack that probably sounds "edgy" to some people but in reality just sounds like a new-metal version of the theme from Melrose Place.

And after a few hours in Druuna's psyche, you'll begin to wonder if saving her mind is really worth losing your own. 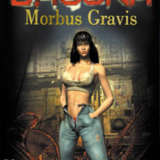