Dropsy--a strange 2D point-and-click adventure about a clown detested by society--is refreshing and sincere. As an adventure game with no text or coherent speech, it subtly deviates from other games of its type. But in doing so, it faces its own share of issues, lacking clarity when needed, sometimes making it a chore to play. Fortunately, because Dropsy has a heartfelt narrative, imaginative non-linear environments to explore, and thought-provoking puzzles, you're drawn into its unusual world right from the start.

Dropsy tells the story of a lovable clown of eerie countenance who becomes a social outcast in his small hometown after being blamed for a mysterious fire that burned down his family's circus. Set on a quest for redemption, he has to clear his name by helping out strangers and giving them hugs (more on that unusual element later). Dropsy's story is a simple and elegant narrative that latches onto themes of selflessness and unconditional love in a meaningful way. It hits emotional notes, far more than what you'd expect from a game about a gleeful clown, telling an intimate and somber tale brimming with distinct personality.

What makes Dropsy distinct is how its story is delivered without text. Since Dropsy can't speak, dialogue is interpreted via speech balloons that visually depict a character's intentions or inclinations. For example: a character can tell you to go somewhere by displaying a pair of legs beside an arrow pointing to a specific location. While this approach seems counter-intuitive for a point-and-click adventure--a genre that traditionally thrives on its rich and explicit dialogue--Dropsy pulls it off with a great deal of success, creating a sense of impact in its storytelling that's both subtle and indirect.

Another part of what makes Dropsy compelling is its strange and vibrant world. Similar to games like Earthbound and The Neverhood, Dropsy has colorful locales packed with a cast of eccentric characters, each with their own humorous mannerisms. From a beefy overactive cop to an oversized baby-like king of the junkyard, Dropsy has plenty of memorable personalities to interact with. But despite these whimsical qualities, there's also an underlying despondency to the game's world. After all, the people in Dropsy have problems and unfulfilled desires. Whether it be a woman yearning to feel loved or two long lost brothers who wish only to be reunited, it's up to you to help them out. This is where the game's puzzle solving comes into play.

As you'd expect from a point-and-click adventure, Dropsy's gameplay is fueled by puzzles. They're challenging, but solvable through keen observation and patience. Some solutions can be as simple as combining an item in your inventory with the right object in the right environment, whereas others can be more intricate in design. One puzzle, for instance, has you using Dropsy and his various small controllable animal companions--who each have their own unique abilities--to meticulously navigate through a series of vents to disable a turret. While none of the puzzles in Dropsy are particularly groundbreaking or different compared to other games of its type, they often offer a level of complexity substantial enough to be interesting and engaging.

Dropsy also benefits from its non-linear design. Taking place on a small island town, you're able to explore the game's world and tackle its main story at your own pace. There are plenty of side-quests to complete, which come in the form of simple two-step puzzles presented by the world's various inhabitants. A day and night system also subtly alters the routines of town residents, paving the way for exploration and discovery of new details scattered across the world. These features loosen up Dropsy's progression, preventing you from feeling locked into specific puzzle solving sequences, allowing for a greater sense of freedom.

For all that Dropsy does well in its puzzles and progression, it isn't without problems. At times, puzzles and objectives can be too ambiguous, much to the detriment of its flow. Common frustrations I had were linked to visual objectives being unclear and some items being difficult to identify. While some entertainment can be had from making sense of Dropsy's ambiguity, these issues persisted, and there were times when I was sent wandering across the map with little or no idea what to do.

When you do overcome these issues and eventually solve the game's various puzzles, you're treated to the reward of Dropsy's only form of expression: hugging. You can hug most things in the game's world and it even has its own stand-alone command. While this sounds like a cheesy feature or gimmick, it's an uplifting element to Dropsy's gameplay that's reflected onto the game's world. For instance, after helping a disenfranchised religious woman discover a calling to help the homeless and hugging her, she could be seen later with a smile on her face, taking care of people at her church. And with every person you helped or hugged, a crayon drawn portrait of them will appear in Dropsy's house.

It's moments and details like these in Dropsy that add an emotionally rewarding sense of fulfillment to your actions. These gestures of kindness mean something to everyone you help, and it's Dropsy's selflessness in the face of his own misfortunes that make the game feel incredibly moving. It's a sentimental notion, but its lasting effect makes the game a heartwarming experience that stretches beyond the rudimentary quirkiness it initially presents.

Upon first glance, Dropsy appears as a simple and offbeat textless point-and-click adventure that seems to pride itself on its eccentric world and premise. But once you give that first hug and imbue its grieving world with a small act of generosity, there's no denying the monumental effect of its charm. Even with issues rooted in its own ambiguity, Dropsy manages to be a captivating game with its genuine narrative, non-linear world, and stimulating puzzles. It's a game well worth playing, if only to feel the warmth of its loving embrace. 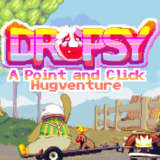 Dropsy brought many warm feelings to Matt Espineli's heart. He doesn't have a fear of clowns, but imagines that the game would be a completely different experience for someone who does. 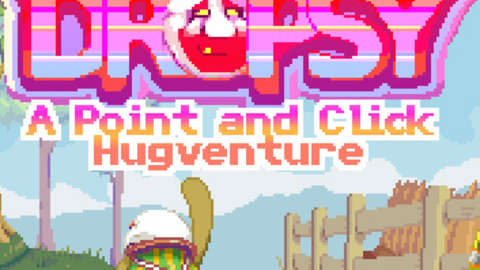 Dropsy is a non-traditional take on the classic point and click adventure formula starring the games perpetually carefree namesake clown as he explores a richly detailed world full of colorful characters and sinister secrets, doling out hugs along the way.