Driver: Parallel Lines is a mostly competent GTA clone, but the dull storyline and remedial gameplay prevent it from being recommendable.

Driver: Parallel Lines isn't nearly as messed up as the last Driver game was. Considering how completely jacked most of Driver 3 was, that's not really saying much, but it's still worth saying. Parallel Lines is a mostly competent game that's probably the most blatant Grand Theft Auto clone to date. Considering that GTAIII was, in many ways, picking up where the first two Driver games left off, maybe this is just a case of turnabout being fair play. Either way, Driver: Parallel Lines isn't broken, but it's almost completely uninspired and devoid of the little things that make these sorts of games entertaining. The characters fall flat, the story is uninteresting, and the gameplay controls are often inadequate. Add to that some pretty drab mission design and you've got a game that looks good on paper, but simply can't add up to a game worth playing.

The action opens in 1978. You, as an 18-year-old named TK, have moved to New York City in search of excitement. You're pretty good behind the wheel of a car, and you quickly catch on with a crew of criminals looking to make it big. This being the late '70s, "making it big" eventually turns out to mean "start a cocaine empire." But, as these things normally go, stuff doesn't pan out quite so well for TK, and he gets locked up for 28 years. This fast-forwards the game to present day. TK gets out of the joint in 2006 with revenge on his mind, and the story picks up from there. It's a potentially interesting premise that falls apart because none of the individual characters are very compelling or likeable in either era.

The gameplay in Driver puts you in a big open city that's broken up into three areas by bridges. There are a few side-missions, like races and repoman jobs, that you can use to earn money, which in turn can be spent on car upgrades. But considering the cars in the game are as disposable as you'd expect from a game like this, spending money on engine upgrades seems like a waste of time, so earning money usually isn't your goal. Instead, you'll follow the story path by taking on a variety of missions. Most of them are, as you might expect from a game called "Driver," focused on operating a motor vehicle. You'll get into races, collect packages, and even steal a car, fit it with a bomb, and then drive it back to where you found it so the owner can get an explosive surprise--unless he played GTAIII, in which case he'll probably see this five-year-old mission design coming from a mile away. Some missions require you to do things on foot, which forces you to deal with the game's lackluster targeting system, which is often skittish and more difficult to manage than it should be. You can target and fire forward out of vehicles, too, but this is only useful when you're chasing someone, which isn't all that often. Considering you get into some pretty hot spots with lots of bullets flying your way, and most of your enemies are crack shots, fumbling with the targeting gets very annoying.

At least if you fail, you won't have to retreat very far. When you die or otherwise fail when on a mission, you can quickly hit a button to retry the mission. Many of the longer missions have checkpoints, too, so you won't have to do the early parts again and again if you're having trouble with the final leg of a mission. It's pretty handy and cuts down on repetition.

There are a few minor police response systems in the game that stand out because the other games in this genre handle things a little differently. Police cars drive around the world, and you can see them on your minimap, complete with Metal Gear Solid-style vision cones. Doing stuff like speeding, running a red light, or causing a collision while in a cop's vision cone activates them and raises your heat level. You actually have two different types of heat to deal with. Normally, cops just see your car and the heat meter for your current vehicle rises as you speed away. But if the cops see you get out of that car, the heat is all on you, and they'll chase you regardless of which vehicle you're driving. But the cops really aren't very difficult to avoid, and they aren't very smart. Usually, turning down an alley in plain view is enough to completely confuse them and cause them to give up the chase. And stopping off at one of your safe havens totally resets your personal heat level, too. Cops occasionally turn up in missions to potentially give you a harder time, but just as often, it seems as though you simply can't find any cops on the streets when in a mission. Overall, the police presence is more of a hassle than anything else, since it forces you to drive slow, stop at stop signs, and other "realistic" stuff that isn't entertaining in the least.

The Xbox version of Driver looks really good if you're playing it in 480p, but in regular resolution and on the PS2, the game is blurrier, more pixelated, and a bit tougher to look at all around, though it has a pretty smooth frame rate and still looks pretty good overall. There are some interesting visual tricks here and there, too, like the way the entire HUD gets redesigned and modernized when you switch from '78 to '06, or the way TK's walk animation changes from a ridiculous swaggering strut in '78 to a toned down, more normal-looking walk in the present day. On the sound side, the game doesn't sound very good. There's a noticeable audio quality difference between the cutscenes and the in-game action, with the in-game voices just sounding much lower in fidelity. Of course, most of the voice acting isn't really worth listening to. Music plays when you're in a vehicle, and there's a decent array of licensed tunes here, though as you might expect, the '70s music is a little more entertaining than the also-ran and out-of-date-sounding stuff you hear in the game's 2006 setting. As far as sound effects go, the only one that really stands out is the pick-up noise that's made when you grab things like health kits. It sounds awfully similar (though the pitch is different) to the pick-up noise in GTA: San Andreas.

Driver is a very by-the-numbers GTA clone. While stuff like having to obey speed laws and stop at red lights arguably makes the game more realistic, it certainly doesn't make it any more entertaining. With unexciting driving physics and lackluster on-foot control, playing Driver: Parallel Lines isn't very satisfying, and the game's monochromatic storyline isn't strong enough to make the trip worthwhile. Sure, it's better than Driver 3, but that doesn't make it a success. 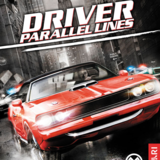