A story for all.

Driftmoon is a throwback to role-playing games from years gone by, with such simple visuals and animations that you could be forgiven for assuming the game were a decade old. But it doesn't take long to look past the dated presentation and discover Driftmoon's ample humor and heart, and to fall in love with the memorable characters and excellent writing that make the short visit to these lands such a pleasant one.

Driftmoon is a top-down role-playing game where you travel across a fantasy land brimming with caves to explore, monsters to fight, and hidden caches of gold coins to loot. You play as a young man cast into an unexpected quest against an ancient evil after climbing out of a watery cave to discover that everyone in his town, save for one, has been turned to stone. Taking up a sword and a bow, the hero travels across green fields, beaches, and through twisting caves, determined to save his home and rescue his missing father.

The evocative writing crafts characters with realism and personality, and caused me to laugh more than once thanks to its sharp sense of humor. As the quest takes you across lush, green fields and through towns and twisting caverns, you meet a cast of fun and interesting adventurers, a few of whom tag along with you. Among the most memorable are the hero's naive brother, Robert, who chirps on about the nobility of adventure; a domineering panther queen; and a talking skull named Bill, who dreams of world domination. The hero is also joined by a firefly named Fizz, who provides extra light in dark caves.

Driftmoon is filled with humorous moments and various pop-culture references. There is a time when you must go--ahem--hand-to-hand against a living disembodied hand named Mittens, as well as help a musician regain his hearing, only for him to realize how terrible his playing actually is. You should also check out Driftmoon's "biggest" tourist attraction, the smallest bridge in the land, or try on the Ring of Megalomania, which causes your character to shout out in boastful arrogance while Fizz begs you to take the ring off.

Objects in the environment can be clicked and dragged across the ground, sometimes revealing sparkling collectibles underneath. It's a fun and interesting feature, and I spent inordinate amounts of time scouring the map for stones or planks of wood to drag away in my search for elusive silver feathers, which serve to increase your mana reserves. Moving around objects has an additional practical use, allowing you to create access to areas that are blocked off or solve puzzles, of which there are not many. The puzzles in Driftmoon are not difficult to crack, and they mostly serve as a quick breather to diversify the occasional dungeon crawl.

You should check out Driftmoon's "biggest" tourist attraction, the smallest bridge in the land, or try on the Ring of Megalomania, which causes your character to shout out in boastful arrogance.

You approach combat armed either with a melee weapon combined with a shield, or with a bow you fire from a distance. The latter is best used against venomous enemies and mobile bombs, which chase you while declaring that they have a present for you. (Don't believe them!) In battle, you attack automatically when you aren't performing various special skills, and keep doing so until all enemies are dead or you manually break free from combat. Any followers you have attack on their own without requiring (or even allowing) any input from you. Unfortunately your allies aren't rowing with both oars in the water, and get hurt often. They won't die, but if they take enough damage they get temporarily knocked out, leaving your lone hero to finish the dirty work.

The fighting system is so simple, and so easy on the recommended difficulty setting, that it grows dull. Even when it seemed I had bitten off more than I could chew, I was able to breeze through battle, because the game pauses when you are near death, allowing you to use a health potion before jumping back into the fray. Near the 5-hour mark, I was hungry for a good fight that would encourage me to turn tail and run, but I rarely found myself against any real odds.

The game does not feature many side quests, making this 10-hour adventure a mostly linear one. But if you're looking for more lands to conquer, Driftmoon supports modification, and even features a mod creation tool so that you can craft your own story. Since the game had been available in pre-release status for some time, there are already several mods available. The mods currently available range from content packs to silly aesthetic changes; one allows you to add tails to the characters, while another sticks enormous googly eyes on spiders. Driftmoon doesn't allow you to modify the protagonist beyond his name, but the Sister mod offers some control over your digital avatar, allowing you to change gender.

Driftmoon is much like a classic fairytale story, overflowing with charisma and heart. The game takes a modest approach in its systems, but shines with clever writing and memorable characters. Whatever flavor of RPG you enjoy, Driftmoon is a delectable treat, particularly if you tend to shy away from the genre's typically complex gourmet meals. 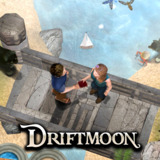